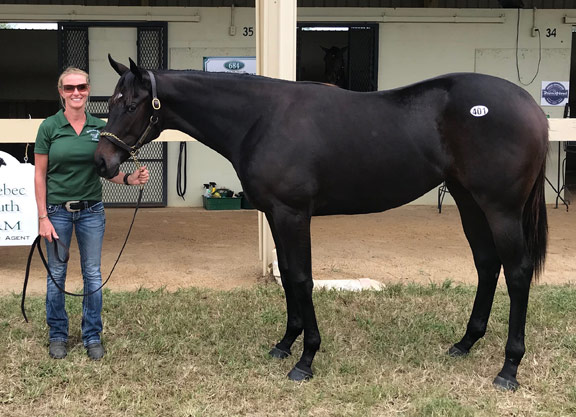 A filly from the first crop of Mosler topped a long day of trade at the Ocala Breeders’ Sales Company’s October Open Yearling Sale Wednesday when selling to Patti Miller for $75,000 (Hip 401). She was part of the first consignment for Sandi Dorr of Sennebec South Farm.

The highest-priced colt of the day was a son of California Chrome, who brought $52,000 from Blue River Bloodstock.

Sandi Dorr has been in the Thoroughbred business a long time, breezing for 2-year-old pinhookers and trainers Eddie Woods and Steve Venosa. The horsewoman made her first foray into the weanling-to-yearling pinhooking market at OBS and hit a homerun, selling a Mosler filly (Hip 401) for $75,000 to Patti Miller of EQB, Inc. during Wednesday’s Open session.

“I’ve been breezing for Eddie for 13 years and I have been working for Steve for 18 years,” Dorr said. “I have done some small pinhooking with 2-year-olds with partners and stuff. I just felt like trying out the weanling-to-yearling thing and it happened to work out. I have a little extra time in the summer to sale prep the yearlings now. That is the only downtime I have so I decided to give it a shot and I had fun doing it.”

Dorr picked up the Maryland-bred filly from the first crop of Mosler (War Front) for just $11,000 at last term’s Keeneland November Sale.

“When they pulled her out of the barn, she just strutted,” Dorr said. “She had a huge walk on her. She was not very big because she was a late foal. She was so fuzzy and hairy. She did not look like she was prepped really well, but she just had an attitude about her like she was something special. Like I said, she just walked awesome and had a really strong forearm, hip and hind leg. I vetted her and everything was good there. When she went through the ring up at Keeneland, she just walked through the ring like she owned it. I love that kind of attitude, especially from a filly. I felt like I needed to have her. I feel like I stole her for what I got her for, especially now!”

Though Dorr was always fond of the filly, she said she did not expect her to bring quite that much money Wednesday.

“I was surprised,” Dorr said. “I knew she was a beautiful individual. She kept getting better and better. She kept growing and developing into a nice-looking filly. She has never given me any problems and just showed so much class at my farm. She was a filly that I wouldn’t just give away because I think she is going to be a racehorse at the end of the day. She showed beautifully and caught everyone’s eye. She did her job for me.”

Dorr offered a total of four yearlings at Wednesday’s sale, all of whom she owned, picked and prepped herself at her farm. Hip 401 and Hip 684, a filly from the first crop of Anchor Down (Tapit), who brought $42,000 from English Range Farm, were both purchased at Keeneland November. Meanwhile, Hip 662, an Archarcharch colt and Hip 321, a filly from the initial crop of Brody’s Cause, were private purchases.

When asked if she was specifically targeting freshman sires, Dorr said, “I think they were viable. I didn’t have a lot of money to spend. New sires are a little more reasonable and they are easier to sell as yearlings because pinhookers are willing to take a chance on new sires. Basically, I was just picking out individuals, a horse that showed some athletic ability.”

She continued, “I bought the Mosler and Anchor Down at Keeneland. They are both April foals, so they weren’t big babies and they kind of got lost in the mix up there. I felt like they had a lot of room to mature and grow and that is why I opted for this October sale to give them as much time to grow and develop into pretty fillies.”