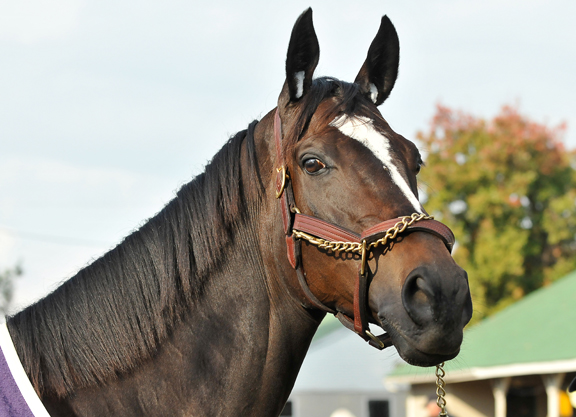 The Breeders' Cup announced it will celebrate the 10th anniversary of Horse of the Year Zenyatta's victory in the 2009 GI Breeders' Cup Classic at Santa Anita Park during this season's World Championships at the same venue Nov. 1 and 2. Designed to facilitate engagement with fans, the one-of-a-kind activities will include both digital and onsite offerings.

“Zenyatta's accomplishments are among the most legendary in the history of horse racing,” said Dora Delgado, Executive Vice President, Racing & Nominations at Breeders' Cup. “Her fortitude and tenacity are truly inspiring, and she will forever be remembered as one of the most impressive Thoroughbreds of all time. Upon our return to Santa Anita, the site of her historic Classic win all those years ago, we're proud to celebrate Zenyatta and look forward to doing so her alongside her dedicated fanbase worldwide.”

As part of the 10th anniversary activities, this year's Breeders' Cup attendees will be able to enter the Zenyatta Peacock Paddock, a specially curated space adorned with exclusive images, memorabilia and life-sized cutouts of Zenyatta. Within the Peacock Paddock, a number Zenyatta's iconic photos will be on display, offering fans the opportunity to memorialize their experiences and share them with fellow fans on social media using the horse's official hashtag, #QueenZenyatta. Also, video set-ups and live screenings will allow fans to relive Zenyatta's most memorable wins and get an exclusive look at the champion at Lane's End Farm in Versailles, Kentucky, where she currently resides. To commemorate her 10th anniversary, limited-edition Zenyatta merchandise will be available to purchase onsite at Santa Anita Park during the championship weekend, as well as online at www.BreedersCupShop.com. During the championship weekend, TVG and NBC Sports Group, the official broadcast media partner of the Breeders' Cup, will pay tribute to the mare by featuring her career highlights as well as her current residence.

Among Zenyatta's highest awards and accolades, she was named as one of the top 10 female athletes of 2009 by Sports Illustrated in addition to 2010 Horse of the Year. She became the first of her gender to win the Breeders' Cup Classic in 2009 before becoming the first horse to win two different Breeders' Cup races, beginning with her victory in the Distaff in 2008.