Backside Learning Center Working Overtime for Those Who Can't Work 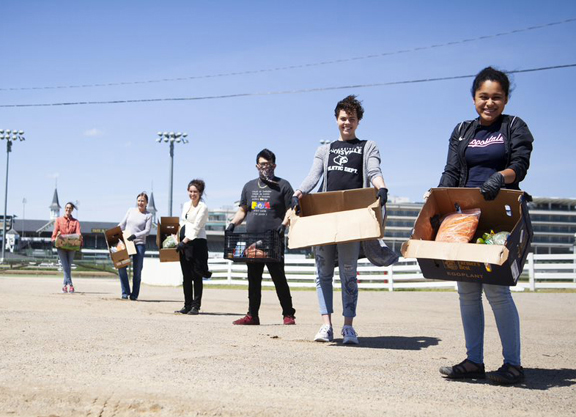 For the team at the Backside Learning Center at Churchill Downs, this is normally their favorite time of year. Backstretch workers return home from working in warmer locations over the winter, families are reunited, and there's a general sense of community and solidarity. The Kentucky Derby is just a few weeks away and fundraising is in overdrive.

But this year looks quite different. For starters, there is a much smaller community to serve. While the Backside Learning Center normally serves about 1,000 workers this time of year along with their families, now there are only 200 to 250 community members in town since most workers have not yet made the trip north. The Churchill Downs stabling area was originally supposed to reopen on Mar. 17, but that date has now been pushed back several times to no earlier than May 5.

For the backstretch community that still remains in Louisville, the need is greater than ever. Those who did not travel south for the winter–mostly families–planned to start working again in March and are now unemployed. Some who did work elsewhere this winter have made the trip home only to have the opening date changed once they arrived. With no means of transportation, they are stuck in Louisville with no income.

The Backside Learning Center is doing everything in its ability to meet the needs of these people. The organization opened its doors in 2004 and has grown immensely in just a short time. What started as a means for teaching English to the backstretch community now provides not only English classes, but also individual tutoring for citizenship test preparation, GED preparation, and technology education. They also conduct art and music programs, as well as bike workshops. Since 2014, they have placed a focus on youth and family service programs, holding after-school and summer youth sessions as a part of their Front Runners Program.

Executive Director Sherry Stanley and Gretchen Hunt, the organization's Director of Development, have been in high gear ever since they realized the huge needs of their families during this difficult time.

“This is all so hard for everyone,” said Hunt. “But if you're separated from your loved ones, you've lost your place of work, you don't have a broader network to seek another job, you don't have transportation, and you may not understand the complex medical information that's all in English, and it can be terrifying. So our role has become really big.”

The first thing the team did was to expand their distance-learning program through DuoLingo. The online program facilitates English lessons in short increments.

“When people are here, they can be active in classes,” said Stanley. “But when they go south for the winter, there are very few opportunities available to take English classes. So we're really trying to ramp up this program so people don't lose ground while we can't be working together.”

But the team soon realized that there were more immediate needs that needed to be met as people waited for the track to reopen. They began running food distributions for members of the community without jobs. They partnered with Dare to Care and Restaurant Depot, two organization that serve to connect the population with organizations by moving unused food from restaurants and food suppliers to people who need it.

Fresh fruits and vegetables were packaged into boxes, and donations of dry goods and non-perishables were added as well. Volunteers traveled throughout Louisville to make home deliveries.

“We started out serving 23 families three weeks ago,” said Stanley. “But as needs grew and more people found out what we are doing, we are now up to about 100 households.”

Stanley also noted that diapers have become an essential item, as there are shortages throughout the city.

“Since many people lack transportation, if there's a shortage at their store, they can't get a hold of them,” she said. “We've had a lot of volunteers ordering diapers on Amazon and working to distribute them.”

“Very few of our clients have home Internet, so it's really exposing the gulf that exists between kids who have access to online resources and those who don't,” said Stanley.

While Spectrum has announced that they would offer 60 days of free Internet, Stanley said that gaining access has not been as clear-cut as advertised and that they've encountered many different complications.

Many children are also lacking devices to learn from, so the Backside Learning Center has been running social media drives asking for donated devices and tablets.

“We had a volunteer make up his own flyers and distribute them throughout his neighborhood to try to collect devices,” said Hunt. “People are really responding even though everyone is going through a hard time.”

Hunt and Stanley said they hope that by next week they can have most of their children engaged in school. For now, they are adding books and “pencil and paper” homework packets to the food boxes.

Volunteers have been encouraged to reach out to their students even though they can't meet in person.

“We're asking our volunteers to send in short video clips that we can send to our students and let them know we miss them,” said Stanley. “We also asked volunteers to write handwritten notes for the kids they teach, to let them know that we hope they're well and that we can't wait to see them. We had a huge outpouring of over 50 cards and we have even more coming in. So it's really touching to see those distributed to our families.”

Last month Stanley shared a video of encouragement via Facebook to all the members of their community that they can't reach face-to-face.

Despite the devastating circumstances, Stanley said she sees this as an opportunity to grow their organization and broaden their reach.

“Due to this crisis, word has really gotten out about what we're doing,” she said. “It's been a really meaningful way for us to gain trust in the community. So many new people are coming out of the woodwork, so hopefully in the long run this can serve more people than ever before.”

As the weeks stretch on with no clear reopening date, the financial need continues to increase.

“Of course, any financial support people can provide is huge,” said Hunt. “It supports us operationally because we need to completely revamp our program. Our transportation costs have increased because we need to drive all over the city to donate food.”

She continued, “Some people have been talking about pledging their stimulus checks to organizations like ours since many of our folks aren't eligible for the stimulus. We feel a lot of gratitude for people in our community who are seeing the needs of our families and students and reaching out.”

Hunt said that anyone with creative ways of obtaining anything from diapers to art supplies to laptops can contact the Backside Learning Center at www.backsidelearningcenter.org

“Our mission is to build community and enrich the lives of equine workers and their families,” said Hunt. “So when I think about these boxes we're delivering, they're more than just boxes. It's a gesture saying, 'we see you, we're still connected, and we care about you.' People depend on us a lot, and so I think it's hard to quantify how much this truly means for people.”