Authentic Hangs on to Give Baffert Ninth Haskell 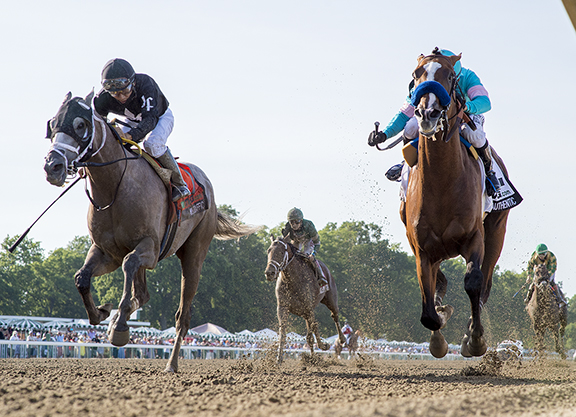 Heavily favored Authentic (Into Mischief) got surprisingly loose early and held on narrowly late in Saturday’s GI TVG.com Haskell S., upping trainer Bob Baffert’s record win total in the prestigious event to nine and earning an automatic spot in the starting gate for the GI Longines Breeders’ Cup Classic. Off at 3-5 looking to atone for a second-place finish at 1-2 behind Honor A. P. (Honor Code) in the GI Santa Anita Derby last month, the bay broke on top and received only token pressure from Ny Traffic (Cross Traffic) as he was kept off the rail a bit by Hall of Famer Mike Smith through splits of :23.60 and :47.52. He appeared to be going much better than Ny Traffic through six furlongs in 1:11.50, and put several lengths on his pursuer in upper stretch as hard-ridden second choice Dr Post (Quality Road) tried to mount a rally. The top three seemed locked in their positions at midstretch, but Paco Lopez aboard Ny Traffic wasn’t giving up on the top spot yet, and he kept after his mount to get into a tight photo with Authentic.

“He’s a colt with an abundance of talent. Ability is something he does not lack. He’s got a lot of it,” said winning rider Mike Smith, who was celebrating his third Haskell (Holly Bull, 1994; Coronado’s Quest, 1998). “But what he is lacking right now, he’s learning, He’s growing up. He sees things. Down the backside… there are a lot of shadows back there from the sun at this point. He looked at every single one of them and he wouldn’t let me get him down close to the fence because he was looking at them too much.

“Then he kicked away like I wanted him to heading for home. Once that horse started to come at him I wanted to get into him a little bit just to get him going. If he was going to start playing again I thought `I just better stay riding and hope he could hang on at that point’–which he did.  I rode him well past the wire just to show him to keep running. I didn’t want him to think it was over when he hit the wire.”

Authentic was a first-out winner at Del Mar last November, and was shelved after defeating stablemate Azul Coast (Super Saver) by 7 3/4 lengths in the GIII Sham S. at Santa Anita in January. He resurfaced to defeat Honor A. P. handily in the GII San Felipe S. in Arcadia Mar. 7, but still seemed at that point to be third on Baffert’s depth chart behind ‘TDN Rising Stars’ Nadal (Blame) and Charlatan (Speightstown). Those two each crossed the wire first in divisions of the GI Arkansas Derby in May, but the former was subsequently retired and the latter sidelined. Charlatan was disqualified from his win and Baffert suspended 15 days earlier this week for lidocaine positives (click for more).       B. Wayne Hughes’s Spendthrift Farm acquired a majority interest in Authentic when buying the equity owned by SF Racing, Fred Hertrich, John Fielding and Golconda Stables days before the June 6 Santa Anita Derby, and micro-share syndicate MyRacehorse.com got in on the colt after his slow start and pace-pressing second in that event.

“I’m just so proud of him, but I was like everybody else telling Mike, ‘You better stay after him. You’d better keep busy,'” said Baffert from California. “[Authentic] looks at everything, as we’ve seen in his past races. I could tell he wasn’t focused going down the stretch but he held on. He saw that horse coming to him and he took off again.

“[Assistant Jimmy Barnes] said he came back not really that tired. We’re learning about the horse. He might need a little blinker, though. He was playing in the stretch. I had told Mike that he had to stay after him and keep him busy. I could tell he wasn’t laying it down. He was just playing out there and that horse came to him and kept him going. But when he got [out on an easy lead] by himself like that I thought for sure he was just going to go on. But he ran a great race.”

Authentic now sits behind only Tiz the Law for GI Kentucky Derby qualifying points with 200. Ny Traffic is fourth with 110.

“I thought he ran good,” said the runner-up’s trainer Saffie Joseph, Jr. “Coming into this race he missed a work and I was a little concerned–did we have enough? At the quarter pole you could see Authentic was cruising and my horse was off the bridle. To dig down and dig deep you can’t be more proud of that. I was pretty sure we lost when I first saw it. We were a head in front right after the bob at the wire. I just want to keep going forward. That’s the important thing. Hopefully all goes well to the Kentucky Derby and we’re living the dream.”

Authentic is the first member of his direct female family to add blacktype in 35 years. His third dam, Arkansas-bred Really Fancy, captured the GIII Anoakia S. in 1985, but the family has been dormant in stakes company ever since. Peter E. Blum acquired second dam Oyster Baby and bred Authentic’s dam Flawless, a $285,000 Keeneland September yearling RNA and two-time winner, out of her. Flawless, by Mr. Greeley whose 76 stakes winners out of his daughters include champion Ria Antonia (Rockport Harbor), produced two winners from two runners before Authentic and had colts in 2018 and 2019 by Bodemeister named Mint and Push Button, respectively. If Authentic’s dam side has been quiet in recent years, his sire line certainly has not as Into Mischief is currently the leading sire in the nation. His 73 career blacktype winners, 30 of which are graded, include 2019 dual champion Covfefe and a remarkable 18 stakes winners of 2020, which is 10 more than his nearest pursuers. His 2-year-old daughters made up the exacta in Thursday’s GIII Schuylerville S. at Saratoga.