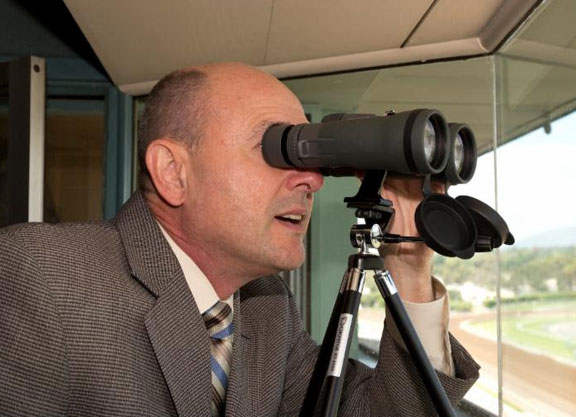 Ahead of its inaugural 14-date commercial fall race meet, Grants Pass Downs in southern Oregon has named veteran race caller Michael Wrona as its announcer for the upcoming Sep. 22-Nov. 4 season. Both the announcer and the racetrack are in the midst of transitional years.

Wrona, 53, has called at numerous North American tracks since venturing stateside from his native Australia in 1990. Last November, he was abruptly let go by Santa Anita Park just two years after winning a four-way international announcer tryout that the track conducted. At the time, Santa Anita management cited a desire to “go in a different direction” as the reason for Wrona's firing.

Since then, Wrona has built a new race-calling circuit for himself, including stints at Kentucky Downs, Sonoma County Fair, and the newly opened Arizona Downs (the former Yavapai Downs, which closed in 2010). He has also been a guest caller in Qatar and at Century Mile in Canada. In December, Wrona will start his first full meet as the new voice of Los Alamitos Race Course.

Grants Pass Downs, which in recent years has run a June/July meet as part of the five-stop Oregon summer fairs circuit, is taking on an expanded commercial role this autumn because of the recent sale and closure of Portland Meadows, the state's long-standing urban anchor of Thoroughbred racing in the northern part of the state.

To prepare for its first-ever autumn commercial meet, Grants Pass Downs is making safety enhancements that include a revamped dirt track surface and an upgraded safety rail, plus improvements to grandstand amenities and the addition of lighting for future night racing.

“I was invited to call a few races at Grants Pass Downs in July and was made to feel very welcome by all levels of this quality organization,” Wrona said. “I'm excited to help launch a new era in Oregon racing as Grants Pass Downs acquires the license previously held by Portland Meadows. The ownership and management have great passion and vision for the track, which is in a beautiful area that I'll enjoy exploring.”

Grants Pass Downs will race Sundays and Mondays starting this weekend through Breeders' Cup weekend, with eight races per day and a post time of 1 p.m. PST.