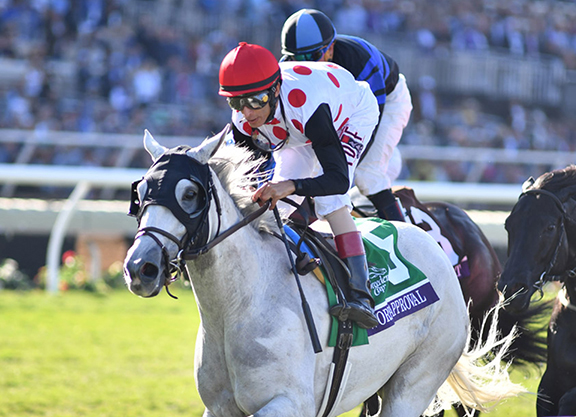 Away well, the nearly white veteran tracked from the two path into the first turn and just behind expected hot splits of :22.30, :45.65 and 1:10.04. Spinning out into the clear turning for home, he spurted clear of his competition as several failed to find clear runs.

“Well, of course, he seems to always break well, and that was important for us,” said trainer Mark Casse, who took this race two years with superstar Tepin (Bernstein). “Then talking to Johnny [Velazquez], we felt like Midnight Storm (Pioneerof the Nile) and Heart To Heart (Kitten’s Joy) would be up front. And Johnny was right. He thought we’d get some–maybe a little speed from the outside, and we did. I was a little nervous about that. I could see going to about the half-mile pole when Johnny started asking him to go, it looked like he hesitated just a little bit. But once he got in the clear, he ran on.”

Velazquez added, “He was between horses and switched leads coming down the lane. He always had it for me. Horses like him make you look good. He’s been perfect for me.”

Things did not go as well for Ribchester, who was somewhat dead on the board and failed to run his race while fifth after racking up three Group 1s this year and a probable Cartier Award. He’ll head to Kildangan Stud in Ireland this coming season.

“I was a little bit disappointed as he came off the bridle a little sooner than I would have expected him to, but he has had a long season,” offered William Buick.

A breakout winner of GI United Nations S. at Monmouth last July, World Approval snapped a four race winless streak on seasonal debut in Florida-bred company at Tampa in April. He added Pimlico’s GII Dixie S. on Preakness Day May 20, but was a close fifth in the GI Woodford Resreve S. on Belmont day June 10. He bounced back with a comfy success in the GI Fourstardave H. Aug. 12, and added the GI Woodbine Mile over familiar foe Lancaster Bomber last out Sept. 16.

“I would tell you that it fulfilled a lot of expectations, and I’m so excited,” said Live Oak principal Charlotte Weber, whose only previous Breeders’ Cup win came with Miesque’s Approval. “I can’t even begin to tell you how excited I am. To have a foundation mare, it’s a privilege and an honor. And Mark has really put the finishing touches on this horse, and I feel privileged to be with the Casse team.”

Casse added of his client, “A lot of people don’t know, but we have a long history. I’m an Ocala boy for 51 years, and I think Live Oak has been there 50 of those years. Her father and my father and her were very good friends. He passed away a couple years ago, but he was always wanting us to be together. So I’m sure he’s watching.”