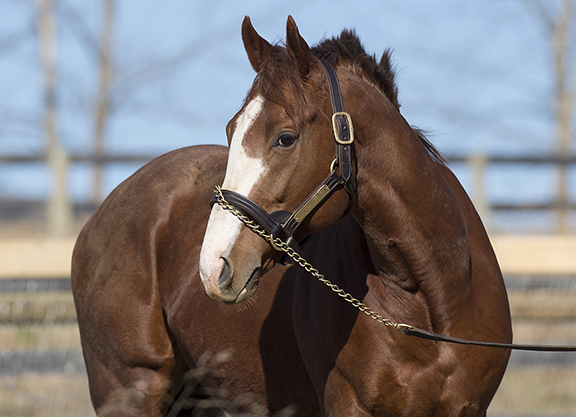 After a devastating 2019 fire at Louis and Grace Merryman's Anchor and Hope Farm in Port Deposit, Maryland, the rebuilding process has come full circle with the arrival of Force the Pass, a Grade I-winning son of Speightstown, who will begin his first season at stud at the farm this year. Force the Pass also marks a new beginning for T. K. Kuegler's Wasabi Ventures Stallions as the first stallion to stand for the growing syndicate.

Kuegler grew up listening to racing stories from his great grandfather, trainer P. J. Lacoste. At an early age, Kuegler told himself that someday, when he had the time and money, he would start a racing stable of his own.

“I fell in love with the romantic image of racing that my grandfather always talked about,” Kuegler recalled. “No one in my family from him to me had anything to do with racing, but it's been stuck in my head for my entire life.”

Three years ago, as a successful venture capitalist and a recent empty nester, Kuegler decided it was time to fulfill his childhood dream. “I wanted to do it in a creative way, so I took some ideas from my start-up world, and decided that I wanted to create new owners, allowing everyday people to buy into small portions of horses. My goal was to get 3,000 new owners into the game.”

Kuegler joined a dozen random syndicates, learning what worked and what didn't. He quickly realized that he could make his partnership group stand out with improved communication and technology. “I joined one syndicate and after I paid my money, I literally never heard from them again. I had to look up everything about the horse myself.”

He took bits and pieces of what he had learned to start his new business. “At first, it was just me claiming some horses. I got a few friends interested, and it grew by word of mouth.”

The syndicate now has just under 1,000 people in the group. Kuegler said that the partnership is unique from a communication standpoint in the way it offers transparency and educational opportunities.

“We built an online community so that our members all over the country can talk to each other. We have webinars teaching how to look at a horse's conformation, how to handicap a pick five, and the basics of claiming. We also have a regular State of the Stables conference, updating members on what's going on with our horses across the country.”

Kuegler's methods have been successful in achieving his initial goal of bringing in new owners. Of the current members, 78% had never owned a horse before joining the group, while 43% had never been to a racetrack before.

While initially only a racing syndicate, Wasabi transitioned to the breeding side of the industry in May of last year. “I actually had no real intention of being in the breeding game,” Kuegler confessed. “We claimed a filly last spring and the next day we found out that she had bowed a tendon. I looked at her pedigree and thought she could be a nice broodmare. My friend and bloodstock agent George Adams agreed, so that was our first broodmare.”

Kuegler's interest in the breeding side of the industry grew quickly. “The mares became like peanuts,” Kuegler said. “The more I looked into the breeding side, the more I realized that I liked it. Now we have 33 broodmares, and we're one of the largest broodmare bands in the Midatlantic.”

As the roster of racehorses and broodmares continued to grow last year, Kuegler turned his attention to finding a stallion. Kuegler and Adams, who was named Director of Stallions and Breeding for Wasabi, scoured the racing world, talking to dozens of stallion prospect owners, including those of a few sons of a few Galileo (Ire) overseas.

One morning while in Saratoga, Kuegler got a call from Adams. “I've got Force the Pass, and I think he's available,” Adams said. “I'm in my car heading to New Jersey to look at him. If he's good, can I buy him?”

Kuegler responded, “If you like him, buy him and send me a picture.”

The duo believed that Force the Pass was the whole package. “He's a physically well-conformed horse who looks beautiful in person,” Kuegler said. “For a regional stallion, especially our first, it was pretty amazing that we got him.”

The 8-year-old son of Speightstown is out of the Dynaformer mare Social Queen, a dual Grade III winner with over $344,000 in earnings.

Bred and raced by Colts Neck Stables, Force the Pass was unraced at two before breaking his maiden upon second asking at three for trainer Alan Goldberg. He then registered three stakes victories in his next four starts, including the GI Belmont Derby Invitational S.

Kept in training through his 7-year-old season, he finished in the money all but five times from 21 trips to the post for earnings in excess of $1.3 million. He will stand for $4,000 this year.

“We priced him really aggressively,” Kuegler said. “We've had people tell us we could have easily set him at $6,000, but I wanted to get as many mares to him as we could with a price they couldn't refuse.”

Kuegler reported that they already have 70 mares committed this year, and four of the top breeders in Maryland have already purchased lifetime breeding rights.

Force the Pass is the newest addition to the stallion ranks at Anchor and Hope.

“I'm a Maryland guy and I want to support the Maryland-bred program,” Kuegler said. “I met with lots of people on where to stand our first stallion, and I grew to know Louis and Grace as trustworthy and hardworking horse people. When we got Force the Pass, it made perfect sense to send him there.”

Anchor and Hope Farm has been in the Merryman family for decades. Purchased by Louis's grandfather in 1965, it has been run by Grace and Lois since 2017. Their first stallions included Bourbon Courage (Lion Heart), Imagining (Giant's Causeway), and Holy Boss (Street Boss), all of which are still a part of the roster.

“Force the Pass is our first outside client stallion, and we couldn't ask for a better fit with our roster,” Grace said. “We look for speed, talent, and soundness, and Force the Pass has all three. As a Grade I-winning millionaire son of Speightstown, he's a perfect addition.”

Grace said that they have been busy receiving inquiries on the new stallion. “He's been incredibly well-received. We are getting calls from all over the place. People are excited to have him.”

After a difficult year in 2019, the Merrymans said that they are looking forward to putting their energy into their new addition. On August 12th last year, a fire destroyed the central barn on the property. Although all the horses made it out safely, the loss severely disrupted the daily operation of the farm.

Five months later, the rebuilding process is now well underway. “With any construction project, you start with an end date in mind and never meet that date,” Grace said. “We have a long way to go, but it's exciting. It will be beautiful when it's done.”

Grace remembered receiving a call from George Adams the morning before the fire occurred, letting them know that Force the Pass was being sent to them. “It was a pretty incredible thing for the team at Wasabi to stick with us,” Grace said. “With this being their first stallion, I wouldn't have blamed them if they got nervous and sent him somewhere else. But it never even crossed their minds, they never wavered in their support and understanding.”

Both the Merrymans and Kuegler said they believe that Force the Pass will offer a new opportunity for breeders in the Midatlantic region. “There isn't another Grade I-winning son of Speightstown in this region,” Kuegler said. “So we saw an opening and now we're excited to see what he can do.”

With Force the Pass now in capable hands at Anchor and Hope Farm, Kuegler is focusing his attention on new ways to grow his business. “This year, we want to continue to improve the quality of our racing stock. Soon, we will be able to race some homebreds. On the breeding side, we plan to add one or two more stallions in the next couple of years.”

He continued, “Although we've grown so much in the last three years, our principles have not changed. I want to give ordinary people a chance to be an owner. Even on the breeding side, people can own as little as 1% of a broodmare and we sold a few small pieces of Force the Pass to people who wanted to have that experience. It's important for our industry to bring in new people, and to do it in an honest and transparent way.”