Runhappy Travers Up Next for Tiz the Law 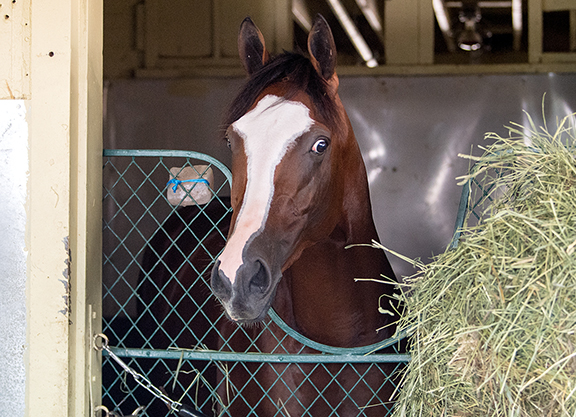 Sackatoga Stable's Tiz the Law (Constitution) exited his win in Saturday's GI Belmont S. in fine shape and will now be pointed towards the Aug. 8 GI Runhappy Travers S.

“He came out of the race great,” said Robin Smullen, assistant to trainer Barclay Tagg. “He ate up and then he came out and grazed for an hour. His legs are good, his attitude and energy are good.”

Mapping out the next few days for the Belmont winner, Tagg said, “He'll walk for three days and we'll graze him every afternoon like we do. The fourth day we'll take him out and jog him once around backwards to see how he moves and how he is and if he eats up that night, we'll go to galloping. And 10 days after that we'll give him an easy breeze, a half-mile.”

Tagg added, “I've never won the Travers and I want to win it. It's very important to me.”

“Both of those races are in play. It just depends on how he bounces out of the race,” Pletcher said. “We were always confident that a route of ground will not be an issue for him. He finished up well. It was a very encouraging effort.”

Dr Post was making just his fourth start in the Belmont, following a maiden win at Gulfstream Mar. 29 with a win in the 1 1/16-mile Unbridled S. in Hallandale Apr. 25.

“Considering he broke his maiden the day after Tiz the Law won the Florida Derby, that's a lot of progress to make in a short period of time,” Pletcher said. “Hopefully he keeps improving.”

“Coming off a 4 1/2-month break, I thought it was a very creditable effort,” Rice said. “You can build on this going forward. Going a mile and a quarter shouldn't be a problem as well.”

As for what could be next for the GIII Withers S. winner, Rice said, “We'll keep all the options open for now and sort it out when we get him back to the track in a week to 10 days.”