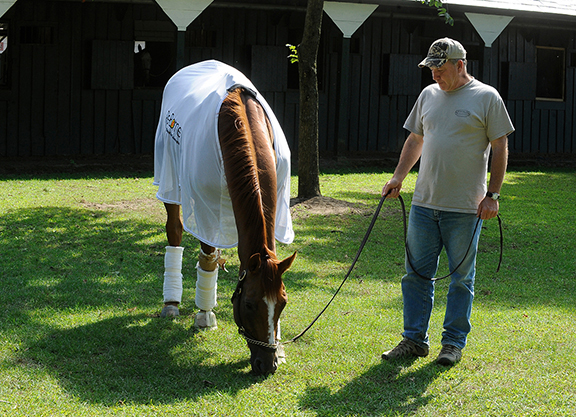 Trainer Charlie LoPresti, who conditioned Morton Fink's Wise Dan (Wiseman's Ferry) to victories in the GI Breeders' Cup Mile and Horse of the Year titles in 2012 and 2013, told Daily Racing Form that he is retired from training.

A New York native, LoPresti began training horses in 1993 and fully 16 years later wa s represented by his first winner at the graded level when Successful Dan (Successful Appeal), a Fink-owned and -bred son of Lisa Danielle (Wolf Power {SAf}) won the GIII Northern Dancer S. His half-brother Wise Dan had his graded-stakes breakthrough in Keeneland's GIII Phoenix S. in 2010 and would go on to become the defining horse of his 27-year career. Having won the Phoenix on the Polytrack, Wise Dan belied odds of 14-1 to win the GII Firecracker H. when making his turf debut in 2011. Highlighting his versatility, he added the GI Clark H. over the Churchill main track to conclude his 4-year-old campaign.

The best was yet to come for Wise Dan, who won the GI Woodbine Mile, GI Shadwell Turf Mile and Breeders' Cup Mile for the first of his two Horse of the Year titles in 2012. He retained his brilliance at the age of six, winning the GI Turf Classic over nine furlongs before successfully defending his title in the Woodbine Mile and Breeders' Cup Mile. He was denied a perfect season when runner-up in the off-turf Shadwell. Wise Dan was a perfect four-for-four at age seven in 2014, winning the Shadwell for the second time, but he missed a three-peat attempt at the Breeders' Cup Mile and was retired with 23 wins from 31 runs and earnings of $7.5 million.

LoPresti saddled his final runner last October and retires with 310 winners from 2,205 starters and stable earnings of better than $20 million.