Home » Archive » Shared News » This Side Up: A Wise Example for Every Horseman

This Side Up: A Wise Example for Every Horseman 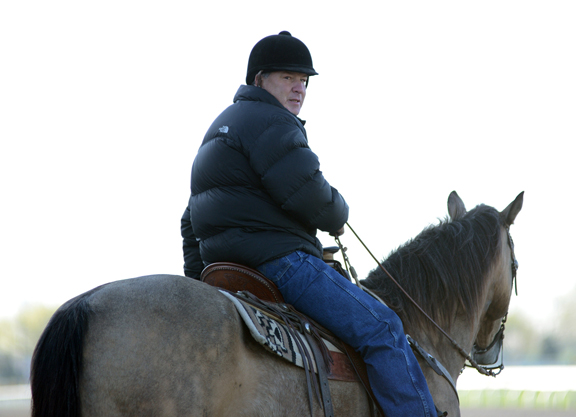 Nobody was paying a great deal of attention to him back then, either. But before ceding the weekend headlines to those storied Oaklawn handicaps, the GI Apple Blossom and GII Oaklawn, perhaps we can all take a step back and pay an overdue tribute to a novice who came to Hot Springs in the winter of 1977. Charlie LoPresti had just turned 20 and, learning the ropes under trainer Joe Cantey, was able to count Cox's Ridge and Miss Raja among the first Thoroughbreds to stimulate the skill and devotion that would find their ultimate measure in one of the most accomplished turf runners of modern times.

Cox's Ridge won the Oaklawn H. the following spring, and Miss Raja the Apple Blossom a year later. LoPresti was hooked. He had not had a conventional grounding, his passion first ignited by an uncle's carriage horses stabled in the basement of the family brownstone in Brooklyn. But he turned out to be one of those people whose innate qualities–patience, application, acuity, more patience–dovetail ideally with the needs of a Thoroughbred. Long before he steered Wise Dan (Wiseman's Ferry) toward the Hall of Fame, LoPresti had in various farm roles already contributed to the making of Arazi, Carr de Naskra and Blushing John.

The hardboots knew how good he was. Just about the best Kentucky horseman of my acquaintance chose LoPresti not only to break his yearlings but also to educate his own son. Further afield, however, people clearly decided that Wise Dan must be a freak. In the year he made his debut, the barn housed 14 other starters. By 2020, five years after bidding farewell to a dual Horse of the Year, LoPresti found he had taken one step forward and two steps back. In the fall, having started just a dozen horses, he quietly disbanded his stable.

So quietly, in fact, that his exit only reached the press this week, after LoPresti surfaced on the Keeneland backstretch for the first time since. Marty McGee of Daily Racing Form found him visiting the barn of his nephew and former assistant Reeve McGaughey, who had taken on most of his staff and horses. “Didn't want to make a big deal about it,” LoPresti said of the way he had slipped away.

As such, the last thing he will want is anyone making a fuss now. Like so many horsemen of the old school, he saw that there was no turning back for an industry that nowadays builds its dominant brands on volume rather than nuance. For a long time Hall of Fame trainers, no less than breed-shaping stallions, reached their ceiling at 30 to 40 horses for any given campaign. But LoPresti, who began training in 1993, had to contend not only with the new “super trainers,” but also with some whose stats are harder to explain. And as we saw from his unobtrusive departure, he was never the type to shout even his deeds with Wise Dan from the rooftops. 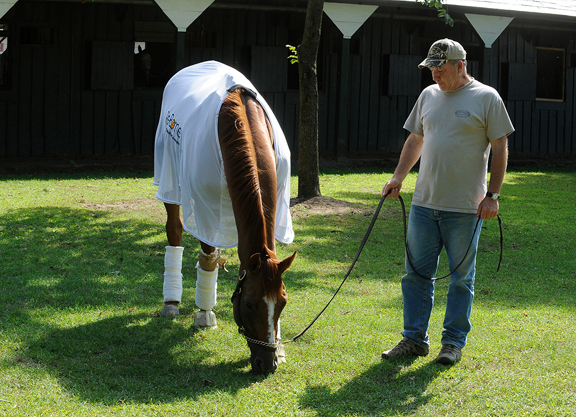 A familiar sight: LoPresti at Wise Dan's side | Horsephotos

A lot of horsemen feel this way. They are humbled by their fortune in stumbling across an animal that amplifies their skills in a way that requires no embroidery: in this case, 23 wins in 31 starts through five campaigns, for over $7.5 million earnings. Because they invest precisely the same devotion and skill to the meekest claiming horses. And you know what? They not only hate the idea of blaring “great job” to themselves on social media; they don't even want to clutter up the shedrow with the kind of owners who go for that stuff. As a mutual friend remarks of LoPresti: “He's quiet because he's always listening.”

Nor was Wise Dan a meteor across an empty sky. Despite those limited numbers, LoPresti had other Grade I winners in Here Comes Ben (Street Cry {Ire}) and Turallure (Wando), while Wise Dan's half-brother Successful Dan (Successful Appeal) was only taken down by the stewards at that level and so had to settle for multiple Grade II success. But every single one of LoPresti's graded stakes winners was homebred. He never pumped commercial patrons and, besides, he views the evolution of a young horses as a continuous, holistic project. He thinks that any ugly creases in a horse's temperament are put there by human clumsiness, and duly preferred to break in himself the horses entering his barn. His name was on the racecard and if they couldn't run, well, he didn't want to blame anyone else. “When he trains your horses,” says one patron, “he eats breakfast, lunch and dinner with them.” 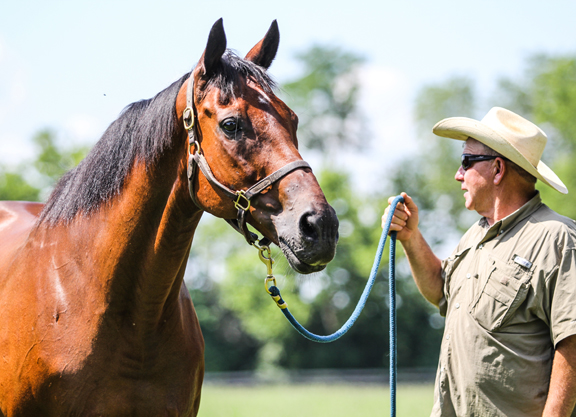 It was good to read LoPresti assuring McGee that he has resisted resentment and, still only 63, is instead enjoying the release from an unequal fight, “happy and healthy and doing things I want to do.” That includes still breaking in babies with wife Amy at Forest Lane Farm, where Wise Dan, now 14, is also enjoying his retirement from the track. I am assured that this extraordinary horse might never have achieved the same fulfilment in other hands. Both LoPresti and owner-breeder Morton Fink gave him all the time he needed. But Fink died in 2019, just months before Wise Dan acceded to the Hall of Fame, and LoPresti evidently sensed his cue.

Hopefully he will derive much pleasure from future success for his nephew, who can of course benefit from the same, exemplary template of horsemanship through his father Shug. In the end, after all, LoPresti's story is actually one of hope. Our business is full of people who just need a break. This week Luis Miranda put his life on the line to run into a smoke-filled barn at Belmont and help save another trainer from catastrophe. Miranda was on hand because, well, he's there up to 18 hours a day tending a handful of horses. The hero of the hour has had 13 winners since he started training in 2012, and none since a claimer at Saratoga in August 2019. He acknowledges himself to be “in a big hole,” professionally. But it's all he wants to do.

You know what keeps Miranda going; him, and countless other horsemen, struggling from coast to coast. Someday he hopes that his Wise Dan will walk through the door. Thanks to Charlie LoPresti, he knows that need not be an idle dream. It does happen. And therefore it still could.

This story was posted in Shared News and tagged Charles LoPresti, Charlie LoPresti, Chris McGrath, retired, This Side Up, trainer, Wise Dan.