Home » Archive » Shared News » This Side Up: Grass Looking Greener on the Other Side

This Side Up: Grass Looking Greener on the Other Side 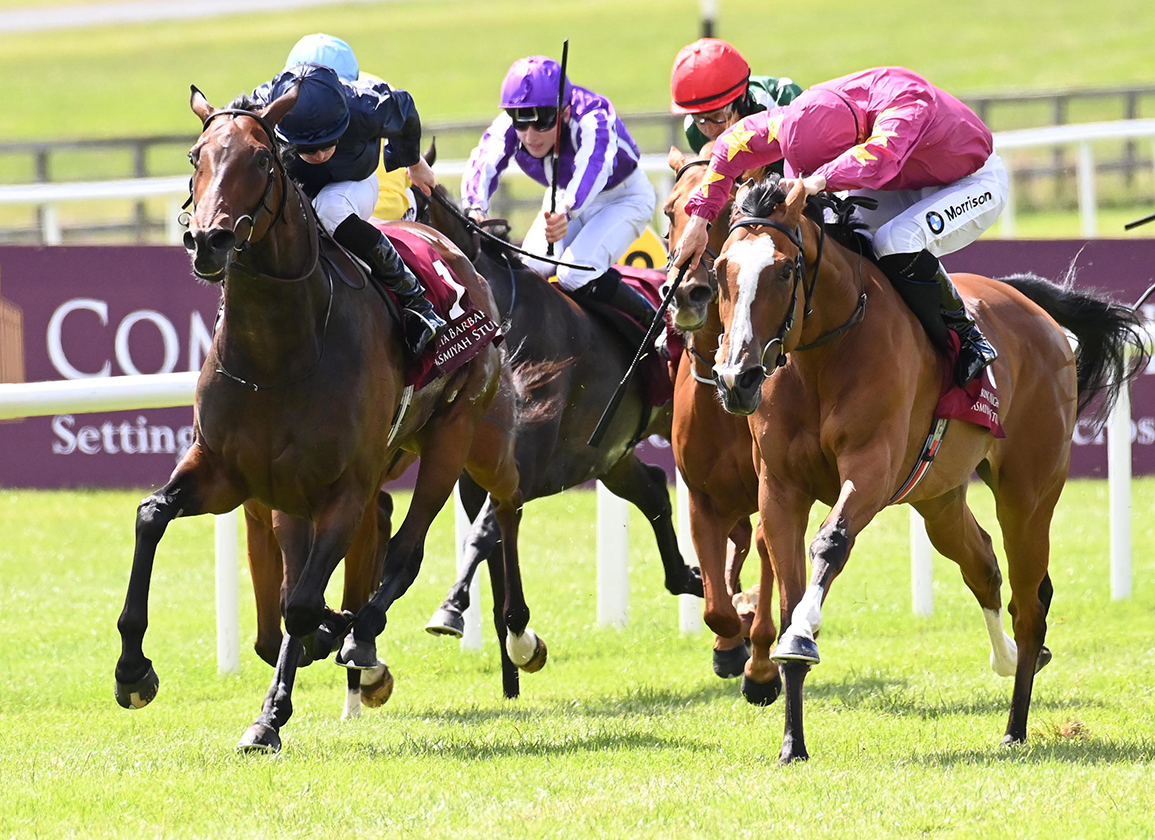 I don't know which is the greater compliment, the one extended across the continent or the one across the ocean. Putting them together, however, the hosts of the GI Belmont Derby Invitational can feel confident they must be doing something right.

This race has now obtained such stature that the most exciting turf sophomore in the land has had to join the recent defections from the Bob Baffert barn in order to take part–even though Du Jour (Temple City) represents a partnership comprising Debbie Lanni and Baffert's own wife, Jill. With Baffert suspended by NYRA, the significance of this colt's transfer to Bill Mott won't be lost on anyone locally. Very few, however, will be aware of quite how seriously the maturing East Coast turf program is being taken by the most powerful stable in Europe.

It is barely a month since 'TDN Rising Stars' Bolshoi Ballet (Ire) (Galileo {Ire}) and Santa Barbara (Ire) (Camelot {GB}) arrived at Epsom as reputedly the premier 3-year-olds of their sex at Ballydoyle. In the event, both proved disappointing and others in the yard have meanwhile advanced through the ranks. Nonetheless both retain a credibility that will focus much European attention on their performances on Saturday–just as NYRA hoped, when inaugurating the Belmont Derby and Oaks in 2014, and the Turf Triple a couple of years ago.

The kudos vested in any colt that starts at such short odds for the Derby can certainly survive a single performance (not least over such an idiosyncratic track) that transparently fell short of his rehearsals. Indeed, it is often better to run unequivocally below form than to settle for the kind of supporting role that might expose a horse's limitations. But the stakes for Bolshoi Ballet are clearly high.

Santa Barbara, for her part, began her campaign under an awful burden of expectation for a filly that had contested a single maiden. In the meantime her remarkable dam had produced a second consecutive Breeders' Cup winner, and Santa Barbara was clearly reckoned to be cut from similar cloth to Order Of Australia (Ire) (Australia {GB}) and Iridessa (Ire) (Ruler Of The World {Ire}). Making her favorite for Classics on only her second and third starts proved too extravagant, though she was beaten only a neck by a much more seasoned rival in another Group 1 since Epsom. Shipping here, with just 10 days between races, suggests that Santa Barbara is now really being put through the boot camp after her leisured adolescence.

To hope for two such important reputations to be renewed here is a tribute to the way these races have bedded down since their launch, shortly after the arrival of Martin Panza at NYRA.

Heritage is the lifeblood of our sport, and around the world we've all seen it discarded by marketing folk without cultural antennae, clumsily conflating tradition with stagnation. And not every innovation in New York's historic race program is going to work this well. Plenty of people, for instance, grieve the absorption of the GI Hill 'n' Dale Metropolitan H. into a mega-card capped by the GI Belmont S.; while donating the GI Jockey Club Gold Cup to Saratoga feels like Robin Hood robbing the poor and giving to the rich. But this regeneration of the turf program was an exceptionally far-sighted response to a growing need.

Everyone in our business talks a good game about turf racing. Racetracks are doing their bit, not just at the apex but through the pyramid. But the American bloodstock industry is not responding where it counts, at ringside. The commercial market's terror of turf stallions is a massive problem. Even proven ones are undervalued and newer ones, however eligible, tend to be dismissed with contempt. As a result, we have a roaring trade in European imports–and nowadays not just proven runners but also yearlings–to farm inflating U.S. purses.

I'm always complaining about the obtuseness of European breeders about dirt blood, but it's a two-way street and cynical, fast-buck trading across the freshman sire window is no way to build a sustainable breed. Let's not forget that turf tends to be a less punishing surface; nor that the welfare of each individual racehorse is increasingly entwined with the viability of our whole sport.

That was the key message drawn this week by colleague Dan Ross in an outstanding two-part interview with the reliably uninhibited Dr. Rick Arthur, who has just retired as California's equine medical director (Click here for Part 1, here for Part 2). It seems to me that too many horsemen employ vets as a pharmaceutical bag-of-tricks, in effect as a means of pushing the margins of regulation. Vets should enter the barn for one reason, and one reason only: to protect the horses housed there.

Baffert, inevitably, featured in several questions and Dr. Arthur indicated a fairly candid distaste for his aggressive works, not least when emulated by others with lesser stock. The world certainly looks a different place since Baffert saddled not only Medina Spirit in the Derby but also Du Jour on the undercard.

Several powerful owners have meanwhile removed horses from his care, but we should not put words in their mouths and Baffert's prohibition from NYRA tracks is doubtless a pragmatic consideration for some, regardless of any other disquiet they may have. To see Du Jour join the exodus to fulfil his potential reminds us that this whole drama is not just playing out in headlines and courtrooms. Human lives are being lived by human beings, out of that limelight but never out of that shadow. At some point, over a coffee or a glass of wine, a husband and a wife and a friend have addressed a dilemma on the margins of the professional and the personal. Du Jour's granddam, remember, is a half-sister to Ghostzapper and City Zip: there's a place at stud in play here.

But then it only looks essential for Du Jour to run at Belmont because NYRA recognized that their turf program needed an overhaul. Doing that has, in turn, incentivized the breeding industry to behave in a fashion that will better serve the welfare of the Thoroughbred. That's the ultimate imperative, after all. And, guess what, it's the same one that requires those who push the boundaries to be policed and punished.