Home » Archive » Europe » The Weekly Wrap: It's Good To Be Back

The Weekly Wrap: It's Good To Be Back 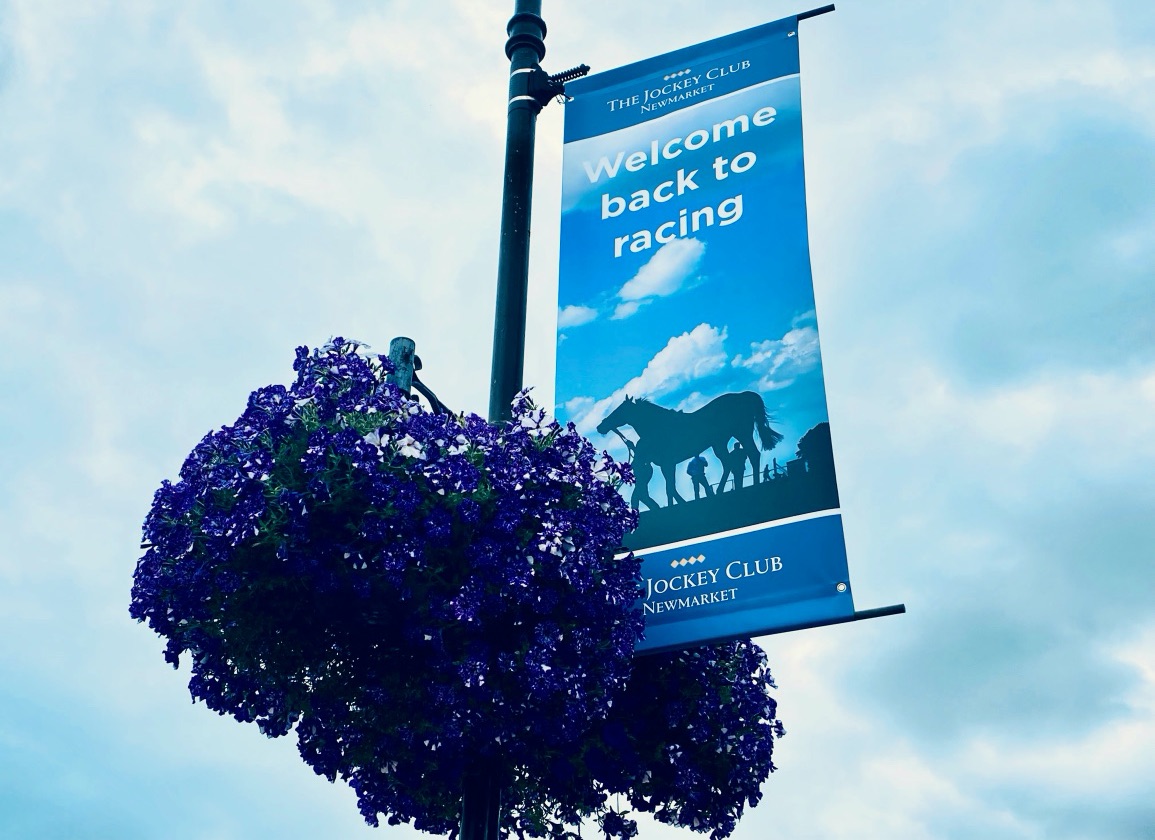 There are banners along the High Street of my home town of Newmarket saying 'Welcome back to racing'. Though we've been fortunate in England to have been able to allow crowds gradually to return to racecourses earlier than some other countries, it has only really been in the last few weeks that it has felt like the proper pre-pandemic experience. And where better to have the people back in force than at York, widely regarded by many to be the best racecourse in the country?

Any amount of time spent on the Knavesmire is time well spent indeed, and you really could have picked any of the days of the Ebor meeting to be able to enjoy a proper feature race with intrigue and stars aplenty. Even the queue for the bus to the track from the train station provided a level of fun. A group of men of advanced years huddled together like schoolboys, copies of the Racing Post tucked under their arms, clearly relishing the prospect of a midweek day at the races. When the bus arrived, they rushed for the long bench seat at the back, always the preserve of the naughtiest in class, and with a full load of passengers chattering about their fancies for the day, our chariot trundled off to the track.

Thady Gosden's name was added to his father's training licence just ahead of the start of the turf season in Britain and though the stable played a less prominent role in the Classics than is usually to be expected, it has now clicked into top gear.

A stellar run was launched eight days ago in Deauville, where Palace Pier (GB) (Kingman {GB}) landed his second G1 Prix Jacques Le Marois, swiftly followed by the G3 Prix Minerve victory for George Strawbridge's Free Wind (Ire) (Galileo {Ire}). Further big guns were wheeled out for York, with the mighty Mishriff (Ire) (Make Believe {GB}) sparking endless 'Is he the best in the world?' debates with his visually impressive first Group 1 victory in Britain in the Juddmonte International.

Whether he is the best or not will be settled at the end of the year in the international rankings–and even then the debate will likely rage on. What can be said with some certainty is that Mishriff is the most versatile at the highest level, with his wins coming on the Riyadh dirt track over nine furlongs in the Saudi Cup, the Meydan turf over 12 furlongs, and now 10.5 furlongs at York, not forgetting his Classic win at Chantilly last season. Victory at the Breeders' Cup–or even in Japan, as has been mooted, with that tempting $3 million bonus on offer–would go a long way to settling the argument once and for all.

While Palace Pier and Mishriff have strong claims to being the best in their divisions, the king of the stayers is still Stradivarius (Ire) (Sea The Stars {Ire}). It is to be hugely regretted that the half-brothers Subjectivist (GB) (Teofilo {Ire}) and Sir Ron Priestley (GB) (Australia {GB}) are both sidelined with injuries as this has undoubtedly weakened the staying division in the second half of the season. But the 7-year-old stallion Stradivarius proved that even if the years have blunted his game a little, he has lost none of his will to win. Arguably, he's at his best when he has to knuckle down and fight, and this is exactly what he did when dispatching the Yorkshire Cup winner Spanish Mission (Noble Mission) on his return to the Knavesmire.

With a race record that now includes three Ascot Gold Cups, four Goodwood Cups, three Lonsdale Cups, two Yorkshire Cups and a Doncaster Cup, Stradivarius is truly one of the modern wonders of the Flat scene. We must continue to enjoy him while we can.

We already have Sir Mark and Sir Michael in Newmarket; could Sir John be next? If the Gosdens manage to turn the impressive G3 Solario S. winner Reach For The Moon (GB) (Sea The Stars {Ire}) into a Classic winner for his breeder The Queen in her Platinum Jubilee year then surely a further mention in the honours' list could be on the cards for Gosden senior, who was awarded an OBE in 2017.

The Queen was just 25 when she acceded to the British throne in  February 1952. Her coronation took place the following June, on what would have been Derby day, with the great race moved back to the Saturday to allow for the royal festivities. The celebrations within the royal household would have been greater still had the Queen's Derby contender Aureole (GB) not been beaten into second by Pinza (GB). More recently, the Queen's colours have been carried in the Derby by the Darley-bred Carlton House, a gift from Sheikh Mohammed, who was third behind Pour Moi (Ire) in 2011. Who would begrudge racing's greatest patron a Derby winner in the year she celebrates her extraordinary longevity as monarch?

Bred on the Sea The Stars-Sadler's Wells cross, Reach For The Moon's pedigree echoes that of the former Gosden trainee and Oaks winner Taghrooda (GB), and the Solario has good form of late for being won by some pretty special horses, including the Gosden-trained trio of Raven's Pass, Kingman (GB) and Too Darn Hot (GB), not to mention the 2018 Derby winner Masar (Ire).

Next June is an awful long way off in racing terms, but the prospect of Reach For The Moon giving the sport widespread publicity during the year-long jubilee celebrations is an enticing one.

The form of the Chesham S. now has a pleasingly solid look to it, with Reach For The Moon and Great Max (Ire) (Wootton Bassett {GB}), who finished second and third to Point Lonsdale (Ire) (Australia {GB}), each finishing one place better in the Solario, while the Chesham winner continued his unbeaten passage with victory in the G2 Galileo Irish EBF Futurity S., having previously landed the G3 JRA Tyros S. The Chesham fifth Masekela (Ire) (El Kabeir) has gone on to win the Listed Denford S., and the seventh-placed New Science (GB) (Lope De Vega {Ire}) subsequently returned to Ascot to win the Listed Pat Eddery S.

Fillies filled four of the first six places in the G1 Coolmore Wootton Bassett Nunthorpe S., and while Suesa (Ire) (Night Of Thunder {Ire}) was favoured to follow up on her Goodwood triumph, it was Winter Power (Ire) (Bungle Inthejungle {GB}) who went the early pace with Wesley Ward's Golden Pal (Uncle Mo), surging straight as an arrow down the centre of the track. As the American raider weakened and wobbled from his early blitz, Winter Power continued to blast home unchallenged to set the seal on a memorable week for her trainer Tim Easterby at one of his local tracks.

There was doubtless much celebration across the Irish Sea in various households of the Burns family, too. For her breeder Patrick Burns it was both a wonderful triumph and huge update for the full-brother to Winter Power that his Newlands House Stud is preparing to send to the Goffs Orby Sale. And for Patrick's brother Maurice, Winter Power became the first Group 1 winner for her speedy sire Bungle Inthejungle, who stands at the family's Rathasker Stud.

Wootton Bassett, who lent his name to the Nunthorpe, also enjoyed some success on the Knavesmire with two stakes-winning juveniles. Royal Patronage (Fr) may have been the least fancied of the quintet who lined up for the G3 Tattersalls Acomb S. but he has progressed nicely from his novice win at Epsom to give trainer Mark Johnston back-to-back wins in the race following the victory of Gear Up (Ire) (Teofilo {Ire}) last year.

On Saturday it was the turn of Steve Parkin's homebred Attagirl (GB), conceived while Wootton Bassett was still standing in France but born and trained in Yorkshire. She bounced out of her narrow defeat the previous week in the listed St Hugh's S. at Newbury to land the listed Julia Graves Roses S., doubtless giving her breeder extra cause for celebration at his favourite meeting of the year.

Wootton Bassett's week was just a nostril away from ending on a high when his star daughter Audarya (Fr) was denied her second win in the G1 Darley Prix Jean Romanet when Grand Glory (Fr) (Olympic Glory {Ire}) snatched victory from her on the line in Deauville.

Caravaggio moved from Coolmore's Irish base to Ashford Stud for the most recent stud season but he is creeping up the freshman sires' table in Europe with three stakes winners to his name already, including Saturday's smooth G2 Debutante S. winner Agartha (Ire).

He's not the only son of Scat Daddy on a roll as No Nay Never is enjoying a terrific season, with Alcohol Free (Ire) as his 3-year-old poster girl and the increasingly impressive G2 Lowther S. winner Zain Claudette (Ire) the star of his juvenile crop.

Tally-Ho Stud is an unstoppable force this season, both as breeder and stallion master. Having had the record-breaking champion first-season sire of 2020 in Mehmas (Ire), who was represented by another top-flight winner over the weekend in the Nicky Hartery-bred GI Del Mar Oaks winner Going Global (Ire), Tally-Ho must now be odds-on to have this year's leading freshman sire.

Whether it will be Galileo Gold (GB) or Cotai Glory (GB) is hard to say. The latter is forging ahead with 23 winners, but Galileo Gold was the first of his peers to notch that all-important Group 1 winner. His leading son Ebro River (Ire), winner of the G1 Keeneland Phoenix S., was bred by Tally-Ho Stud, as was Lusail (Ire), who gave Mehmas back-to-back winners of the G2 Al Basti Equiworld Gimcrack S. and is owned, like Ebro River, by Al Shaqab Racing, which also campaigned the sires of both youngsters.

Further top-level success came on Sunday in the G1 Darley Prix Morny with the Tally-Ho-bred Perfect Power (Ire), who became a first Group 1 winner for his sire Ardad (Ire). Though Ardad is not a Tally-Ho stallion–he stands at Overbury Stud in England –he was however bred by the O'Callaghan family and reflects further glory on the Tally-Ho team as he is a son of its headline stallion Kodiac (GB).

The latter in turn is the sire of the Tally-Ho-bred G1 Commonwealth Cup winner Campanelle (Ire), who was also the winner of last season's Prix Morny. It is a race which has been a particularly successful one for Tally-Ho Stud, which also bred the 2008 winner Bushranger (Ire) and Unfortunately (Ire), who landed the 2017 running of the Morny. Those two colts were also by Tally-Ho stallions, the late Danetime (Ire) and Society Rock (Ire) respectively.