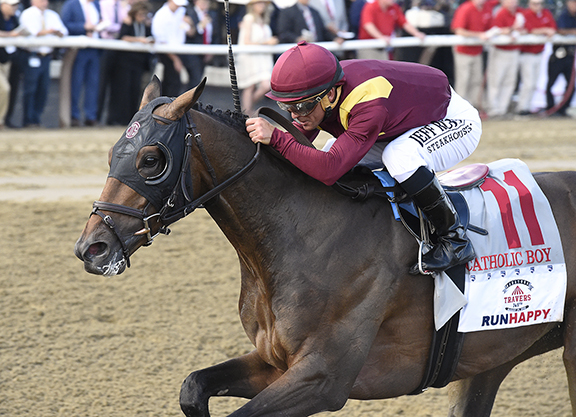 In our ongoing series, New Stallions, the TDN is visiting first-year sires around the country and giving readers a chance to take a look at them on video. Today, we're at Claiborne Farm visiting Catholic Boy (More Than Ready-Song of Bernadette, by Bernardini), one of only three North American 3-year-old colts to win Grade I races on both turf and dirt. In accomplishing that feat, he joined Secretariat and California Chrome. Kelsey Riley spoke to Bernie Sams about the 5-year-old new stallion.

TDN: Catholic Boy is pretty unique in that he's a multiple Grade I winner on the dirt and turf. But he did more than that, of course. Let's talk about some of the highlights of his career.

BS: Catholic Boy won graded stakes on the turf (the GIII With Anticipation S. at Saratoga) and dirt (the GII Remsen S. at Aqueduct) at two. And then, of course, he came back and backed it up with Grade Is. One of the highlights of Catholic Boy's race record was the Belmont Derby, but the real highlight was probably the Travers. And to get a horse like that can win dirt and turf Grade I races in top-class company, it doesn't happen very often. And I think in the Dixie at Pimlico this year, too, the way he ran off the layoff really got people's attention as well. So it's made him very popular amongst the breeders.

TDN: What was it about his running style in particular that you think could pass on to his progeny?

BS: He had speed where he could be tactical where he needed to be and he was up close. It wasn't like he had to come from behind.

TDN: And from the breeders who have come out to see him so far, what has been the feedback?

BS: Everybody has loved him. I'm not sure what people expected. I think they weren't sure he was going to be as big as he is maybe, being by More Than Ready. And I think everybody that's come out again, they've been very pleased with the way he looks and the response has been tremendous.

TDN: You say maybe he wasn't what people expected. Can you describe him physically?

BS: He's probably 16'2, correct, got plenty of scope. He's a good-looking horse. You can breed just about anything, I would think, to him.

TDN: Talk about his pedigree a bit.

BS: We haven't had much experience with sons of More Than Ready in the state, surely. It has been pretty remarkable that he shuttled for however many years and has never missed a beat, and continues to get quality runners in both places. So that was a big plus. The female family is strong. We've had a little bit of experience with the family, as there have been a couple of mares out of that family at the farm and some runners out of the family. And the Bernardini broodmare sire part of it is a very interesting as well.

TDN: Anything else you want to add about the horse?