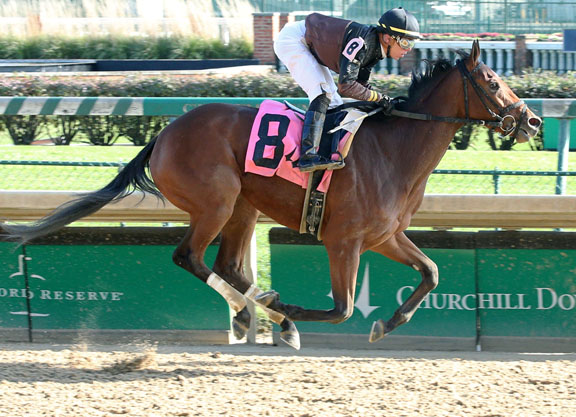 4th-Churchill Downs, $93,121, Msw, 11-9, 2yo, f, 1 1/16m (off turf), 1:46.91, ft.
IVYETSU (f, 2, Tapit–Compelling {Ire}, by Kingmambo), off as the even-money favorite, made light work of a rained-off Churchill maiden Saturday afternoon, romping by 5 3/4 lengths. Settled just behind the leading trio after a clean dispatch, the homebred fired up a bit when brushing with a rival at the midpoint of the first turn, but settled better turning up the backstretch. Stalking from a three-wide berth into the turn, Ivyetsu took command under a Tyler Gaffalione hold with better than a quarter-mile to race, opened an unassailable advantage and was ridden out to a facile success. Ivyetsu was stretching out in trip off a debut fifth at Keeneland Oct. 5 that really had to be seen to be believed. A well-bet 6-1, she dwelt at the start, spotting her rivals at least 10 lengths, and was out of the picture before poking her head into the frame with about a half-mile to race. She finished full of run to be fifth–albeit a distant one–behind a 'TDN Rising Star' performance from Specially (Tapiture), but one that suggested there was more than a little innate talent. A half-sister to French Group 3 winner Last Kingdom (Frankel {GB}), $360,852, Ivyetsu is a maternal granddaughter of G1SW and English highweight Damson (Ire) (Entrepreneur {GB}). Ivyetsu has a foal half-sister by Medaglia d'Oro and her dam was covered this year by Justify. Sales history: $300,000 RNA Ylg '18 KEESEP. Lifetime Record: 2-1-0-0, $56,542. Click for the Equibase.com chart or VIDEO, sponsored by Fasig-Tipton.
O/B-Michael Baum & Reiko Baum (KY); T-George R. Arnold, II.