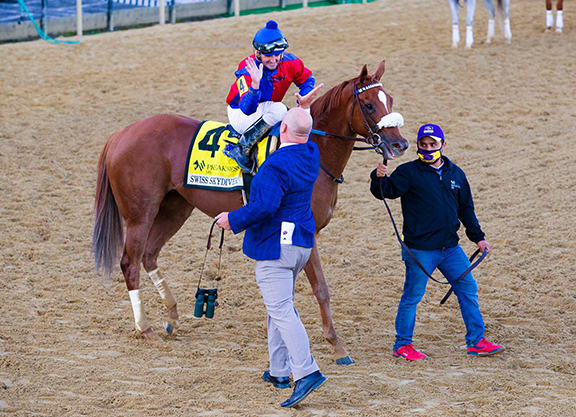 You know this adage well: “Sell a stallion overseas and he'll catch fire.” The latest example is Daredevil (More Than Ready), whose remarkable first-crop daughter Swiss Skydiver put on a show for the ages on Saturday to deny Gl Kentucky Derby winner Authentic (Into Mischief) the Gl Preakness S. at Pimlico. Trained by a daredevil in Kenny McPeek, Swiss Skydiver and Authentic engaged in a protracted head-to-head stretch duel, but the filly never let Authentic get the better of her at any stage and won the Classic by a neck, defeating a colt who is valued at more than $20 million and is a son of North America's hottest sire, whose fee will be $225,000 live foal next year.

In contrast, McPeek purchased Swiss Skydiver for owner Peter J. Callahan for just $35,000 at the Keeneland September sale. Her sire Daredevil had entered stud at WinStar in 2016 for $12,500, and by the time she sold in the ring, he was down to $7,500. Last November, with his first runners only two, WinStar sold Daredevil (along with Derby winner Super Saver {Maria's Mon}, sire of Runhappy) to The Turkish Jockey Club after completing just four years at stud at the Kentucky nursery.

What all of this points out, of course, is that you can never tell with any precision the price point from where a good sire or horse will come. Into Mischief, speaking of the devil, also started off for $12,500 at Spendthrift and was down to $7,500 before his runners took off, and racing history is full of examples of inexpensive yearlings that made good. Seattle Slew was a $17,500 yearling, Zenyatta cost $60,000, and Curlin made $57,000 on a bid from none other than McPeek.

However, the recent phenomenon of selling young stallions abroad before they've had a chance to prove themselves is directly a result of the commercialization of the industry, specifically in Kentucky. Those stallions in their third and fourth years at stud are particularly vulnerable because their patronage drops off precipitously in many cases, and here's why: commercial breeders don't like to assume the risks of selling yearlings from a stallion's third and fourth crops, because the stallion's oldest foals will be three and four and fully exposed on the racetrack by the time those yearlings sell. If the stallion isn't successful, breeders will get punished in the sales ring.

By the way, this can apply to a stallion in his second year at stud as well, and Runhappy is the big example this year. His 2020 yearlings to date have averaged $47,270 versus $222,625 for his first-crop yearlings last year. Why? Because at this writing, he's been represented by only four 2-year-old winners and no stakes horses.

Runhappy may very well turn things around by the end of the year and have success with his 3-year-olds like Daredevil, but that's moot to the commercial yearling sellers who drive the stallion marketplace. As they've increased in numbers and scale, they've increasingly backed “risk-free” first-year horses or elite sires at the top end of the marketplace, leaving strings of crumbling books in their wake.

By the way, it's primarily for this reason that The Jockey Club intervened with its 140-mare cap rule, which begins with foals of 2020. The thinking was that by limiting big books, overflow mares will go to younger horses in their third and fourth years or to mid-level proven horses, but that's not going to happen with an industry dominated by commercial breeders, is it? What it likely will lead to is a greater number of sires entering stud–more first-crop sires on the front end to satisfy insatiable demand–but it's not going to address the existing back-end issues of crops two to four, meaning we're likely to see even more departures from Kentucky of young horses in the future.

WinStar exercised a clause in the sale of Take Charge Indy that allowed it to repurchase the horse and stand him again at WinStar in 2020, but Elliott Walden, president and CEO at WinStar, said on Tuesday that no such mechanism for repurchase existed in the sale of Daredevil. On the question of whether WinStar was pursuing a deal to bring Daredevil back, Walden was noncommittal.

Certainly, there's a case to be made for bringing Daredevil back. For one, he was a 2-year-old Grade I winner of the Champagne S., trained by stallion-making trainer Todd Pletcher at that. He's also been the first son of WinStar's excellent sire and former Pletcher trainee More Than Ready to show life as a stallion in North America. Remember, Swiss Skydiver, Preakness aside, also won the GI Alabama S. and is odds-on to be named the champion 3-year-old filly.

To date, Daredevil is the sire of four black-type winners, and Swiss Skydiver isn't his only top-level winner: Shedaresthedevil defeated Swiss Skydiver and the outstanding Into Mischief filly Gamine in the GI Kentucky Oaks. And Daredevil also is represented by the talented 2-year-old filly Esplanande, a stakes winner of three of four starts who was second in the GI Spinaway S. last month.

WinStar bred both Swiss Skydiver and Shedaresthedevil and is co-breeder and co-owner of Esplanande, but Walden will be the first to admit that he never expected Daredevil to do what he's done. Furthermore, Walden noted that Daredevil “bred only 21 mares in 2019,” which meant that 2020 was projected to be a bigger struggle. Swiss Skydiver was only a maiden special weight winner and Shedaresthedevil only a graded-placed winner last year, and Daredevil was barely visible with a magnifying glass on freshman sire lists, much as Runhappy is now. In contrast, Take Charge Indy had finished second to Violence on the first-crop list of 2017, and it was easier to project improvement from his runners because the stallion himself was a Grade I winner at three and a son of late-developing A.P. Indy. The Daredevils were expected to make an impression at two based on the stallion's own race record and his sire's production history of precocious runners, but they didn't.

To further complicate matters, the Daredevils as a group weren't particularly fetching physical specimens, more just average types. Owner-breeder Chuck Fipke had one knockout colt that he bought back for $375,000 at the Keeneland sale in 2018, but the stallion's first-crop yearling average that year was $34,811 for 56 sold–the average of what Swiss Skydiver brought.

The case of Daredevil isn't isolated but rather the example of a syndrome. Gary and Mary West went through this with New Year's Day (Street Cry {Ire}), the sire of their champion Maximum Security and Grade l winner Fighting Mad–both homebreds from the stallion's second crop. Like Daredevil and Into Mischief, New Year's Day was a Grade I winner at two who entered stud for a $12,500 fee. He was sold to Brazilian breeders after five seasons at stud because no one was breeding to him after his first few years except for the Wests, and after the success of Maximum Security, he was purchased by Shadai to stand in Japan.

There are other examples–California Chrome is a bigger name sold last November to Japan after three seasons–and depending on where you stand, it could be unfortunate or not. Most stallions are not going to make it, and a secondary market from Turkey, Korea, Japan, or South America is welcome relief for stallion investors.

But why this happens should not surprise anyone anymore. Unless more breeders step up to back stallions for four or five years and race the horses they produce, stallions will continue to become disposable after a few years at stud. That's how this market works.