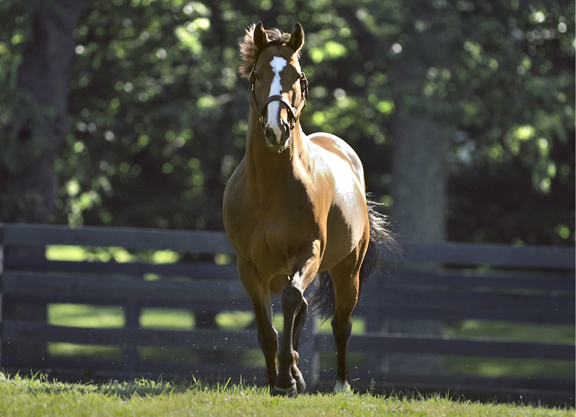 Into Mischief (Harlan's Holiday–Leslie's Lady, by Tricky Creek), the reigning leading general sire whose son Authentic became his first Classic winner in the GI Kentucky Derby last month, will command a fee of $225,000 for the 2021 breeding season, officials at Spendthrift Farm have announced. The sire of 26 stakes winners and 11 graded winners in 2020, the 15-year-old stood for $175,000 this past year. Only War Front ($250,000) currently stands for a larger advertised fee.

Also the sire of the brilliant dual Grade I-winning 'TDN Rising Star' Gamine, Into Mischief was also represented just this past weekend by the impressive GII Bourbon S. winner and 'Rising Star' Mutasaabeq and GII Gallant Bloom H. and fellow 'Rising Star' Frank's Rockette. Each could make their next appearances on Breeders' Cup weekend Nov. 6 and 7. In addition to Mutasaabeq, the stallion's other juvenile graded winner of 2020 is the filly Dayoutoftheoffice, who won the GIII Schuylerville S. at Saratoga. With progeny earnings approaching $14 million, Into Mischief retains a stranglehold on the top spot among this year's leading sires according to TDN Sire Lists.

Into Mischief's commercial appeal has also skyrocketed this season, as he ranks second among active sires by yearling average. Some 74 foals from his 2019 crop (from 106 offered at public auction) have sold for an average of $434,405, according to TDN Sales Statistics. He was represented by no fewer than five seven-figure horses at Keeneland September last month, including a $1.9-million daughter of Taylor S (Medaglia d'Oro) that was hammered down to one of the stallion's biggest supporters, Larry Best's OXO Equine.

“In our minds, there was only one box left to tick for Into Mischief and that was siring a classic winner. Authentic was able to do that pretty emphatically in the Kentucky Derby, and we continue to believe the best is still to come for Into Mischief,” said Ned Toffey, general manager at Spendthrift. “Authentic, Gamine and these 3-year-olds were bred on a $45,000 fee, and Into Mischief has continued to cover better books every year. It has been gratifying to see him thrive in the sales arena, including having the second-highest yearling average along with more seven-figure yearlings than any other North American sire in 2020. Into Mischief is the best sire in the world and set to continue to prove it. We are also confident he will become an important sire of sires and have shown that in our commitment to acquiring his best sons.

Toffey continued, “We think he is making a positive impact on the breed that will be felt for years to come, particularly with the heart and durability that are signatures of his offspring. Into Mischief is just a remarkable animal that has the chance to be among the very best the breed has seen, and we feel extremely fortunate to have him.”

Spendthrift plans on releasing fees for the remainder of its roster later this week.