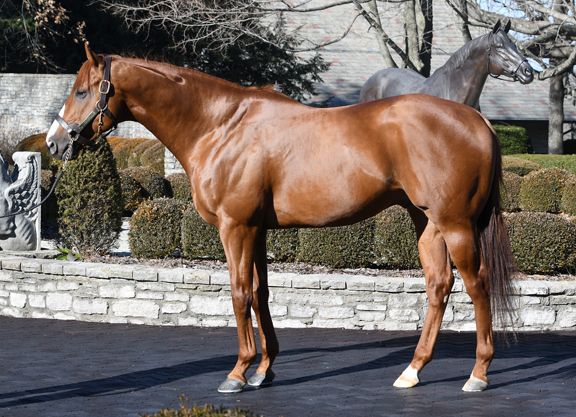 January can be cold, bitter, and snowy in Lexington, but the weather was unseasonably warmer during Keeneland's Horses of All Ages sale, which made life easier for inspecting broodmares and short yearlings on the sales grounds and stallions at the nearby stud farms that power the industry here.

Most of the major farms offer daily lunchtime stallion shows during sales week–the food, by the way, varies from farm to farm–but decent weather means outdoor showings and greater flows of traffic, which add some conviviality absent from the proceedings when shows are limited to indoors. Stallion directors seemed to talk more freely, too, and one takeaway is their concern for filling the books of their second-, third- and fourth-year horses, but overall the weather–and there were several sunny days–brightened the moods of many this week, at least among the people that I bumped into along the way.

In Lexington, you tend to run into the same people repeatedly, I've found, and by the second or third (or fourth or fifth) time you're liable to ignore the same folks you'd greeted so warmly the first time around, but the weather probably contributed to the warmth of multiple interactions throughout the week.

Stallions are always topics of conversation this time of year, particularly those with their first foals on the way like Justify (Scat Daddy), the latest of two Triple Crown winners at stud at Coolmore America's Ashford Stud. The other one, American Pharoah (Pioneerof the Nile), just completed a triumphant freshman sire championship for the global operation, and there's plenty of hope that Justify can follow suit. There's already an important precedent for Justify that augurs well: No Nay Never (Scat Daddy), based at Coolmore in Ireland, was the champion European first-crop sire of 2018 and a leading sire last year.

No Nay Never was campaigned by Coolmore and the Ice Wine Stable that includes Dave Reid and the brothers Frank and Jerry Antonacci–also major figures in the Standardbred world through their Lindy Farms. I ran into Frank's son Philip Antonacci, a Darley Flying Start graduate, repeatedly throughout the week, first at Lane's End where he was inspecting City of Light (Quality Road), and later at Keeneland and at other farms and venues.

Justify's first foal, a filly, was born on Jan. 3 at Amaroo Farm in Lexington. The dam is the winning Exchange Rate mare Foreign Affair, who's owned by Audley Farm of Berryville, Virginia. Coincidentally, it was at Audley where the first foal of the first Triple Crown winner, Sir Barton, was born in 1922. Also a filly, she was bred by Commander J.K.L. Ross, who raced Sir Barton and then later sold him to the partnership of the brothers B.B. and Montfort Jones, who'd purchased Audley in 1920 (for $106,000, according to Audley Farm equine manager Jamie McDiarmid in a recent BloodHorse piece; Jennifer S. Kelly, who wrote the book “Sir Barton and the Making of the Triple Crown,” writes it was in 1921), and J.E. Madden of Hamburg Place in Lexington–the co-breeder and first owner of Sir Barton.

Madden, who bred five Kentucky Derby winners, initially tried to buy the breeding rights to Sir Barton after the Preakness in May of 1919 for $50,000, but was turned down by Ross. The colt won the Belmont S. on June 11, but at the time the Triple Crown wasn't a concept and didn't have the cachet it has now.

Sir Barton raced the next year at four and famously lost a match race to Man o' War. He was kept in training at five, but never started, retiring to stud in April of that year. Ross bred some mares to him during the abbreviated season and then sold him (for $100,000, according to McDiarmid), but he retained five breeding rights and sent his mares with Sir Barton to Audley, where the stallion stood for $500 in 1922 and $1,000 in 1923.

Press reports at the time said the Joneses and Madden had purchased the horse to stand in alternating years at Audley and Hamburg Place, but that never happened, and in September of 1923 it was reported in the New York Times that the Joneses had bought out Madden's half-interest in Sir Barton.

Since 1978, when Hubertus Liebrecht purchased Audley, the farm has been owned by a German family that's one of the wealthiest in the world. Liebrecht was the grandson of the founder of the family owned global conglomerate Boehringer Ingelheim and bred horses in Germany before acquiring Audley. After he died childless in 1991, his heirs from the Boehringer and von Baumbach branches of the family have continued to operate the farm while staying discreetly behind the scenes.

First foal aside, Justify got some additional press this week when it was announced Monday that Mick Ruis, who owned Bolt d'Oro (Medaglia d'Oro)–now at stud at Spendthrift and runner-up to Justify in the Gl Santa Anita Derby–had filed a petition against the California Horse Racing Board (CHRB) in court to disqualify the Triple Crown winner from the race and redistribute the purse because, the petition states, Justify was found to have subsequently tested positive for Scopolamine and was not punished for the infraction as the rules stood at the time.

Joe Drape of the New York Times had broken the story last year and had written that Justify shouldn't have been eligible to compete in the Kentucky Derby without the purse monies from the Santa Anita Derby, but Dan Ross's piece in TDN had an interesting quote from Ruis's attorney Darrell Vienna that suggests otherwise. Ross wrote: “According to Vienna, even if Justify is stripped of his victory in the Santa Anita Derby, that action wouldn't impact his subsequent achievements.

'There's a California case which says a horse's eligibility [to compete] is determined at the point which it is entered and nominated,' he said. 'At that point in time, there had been no adjudication. He was eligible to compete in all those races.'”

There's plenty to celebrate Justify and American Pharoah as it is, and the perfect venue for that would be the charming and cozy Amsden Bourbon Bar in downtown Versailles, about seven miles from Keeneland. Located in a historic building by the same name, the bar is alternatively referred to among the bloodstock crowd as “Charlie's bar” in honor of its co-proprietor Charlie O'Connor, director of sales at Ashford, and it's stocked with hundreds of brands of bourbon and is on the Kentucky Bourbon Trail that draws so many aficionados of the spirit to its native state.

The night I was there with Werk Thoroughbred Consultants bloodstock editor Frances J. Karon, O'Connor was in the house, as was Richard Henry, whose Primus agency exclusively handles Coolmore's global advertising. Coolmore's Paul Shanahan was expected later on, according to bartender Alice, who'd already decanted his wine. Also present was the ubiquitous Philip Antonacci, whose family through Ice Wine Stable bred the first winner by No Nay Never, the filly Mae Never No.

Through his Petaluma Bloodstock, O'Connor co-bred, with his father-in-law's Windmill Manor Farms, Coolmore's crack Group 1-winning sprinter Caravaggio, another promising son of Scat Daddy standing alongside No Nay Never at Coolmore in Ireland.

Claiborne's Bernie Sams highly recommended the steakhouse Tony's of Lexington on Main Street, where I ate one night, and I can add to his recommendation. The food was superb, and it's no wonder that it draws players in the industry. Yes, I ran into Philip Antonacci there, as well as bloodstock agent Donato Lanni, whose clients include Bob Baffert and Glen Hill Farm's Craig Bernick, who joined him at a table after dinner to watch LSU win its fourth national championship.

Ocala-based Glen Hill, under Bernick, grandson of founder Leonard Lavin, had its first consignment to Keeneland this year and ended up selling two of the three highest-priced lots in the sale, the 3-year-old Confidently, a half-sister to Coolmore's Uncle Mo by Claiborne's War Front for $560,000; and 10-year-old Inflamed, the Unusual Heat dam of the Uncle Mo Grade l winner Mo Forza, for $525,000. Bernick, a gambler, had paid $170,000 for Inflamed just two months ago at Keeneland November and had guessed right that Mo Forza would win the Hollywood Derby.

Airdrie's Cormac Breathnach (pronounced Brannock) had eaten at Tony's the night before I did. Breathnach, who's part of the stallion nominations team at Airdrie, was concerned by the growing trend among breeders heavily patronizing first-crop sires at the expense of well-qualified horses with foals and yearlings on the ground, a concern shared by others, including Bill Farish of Lane's End, who I spoke with at the farm, and John Phillips of Darby Dan, who I ran into near the Keeneland bar a day after speaking to Breathnach.

Phillips noted that these days, the only way for a farm or syndicate to make its investment back on a stallion is to front load the first book because the second, third, and fourth books are liable to drop off drastically in quantity and quality.

Moreover, for most stallions to survive commercially these days, they need to succeed right away with their first crops, and sheer numbers are one way of giving them a chance to do so. But, there's a difference that most breeders understand between first-year commercial success and sire quality.

This may seem new, but a Capt. W.H. Williams wrote a piece in the Morning Telegraph in 1921 that was reproduced the same year in the Thoroughbred Record that said: “It also shows the utter fallacy of deciding that stallions are worthless simply because they fail to produce race-horses during their first year or two at stud.”

I'm sure there are a number of stallions you could think of that fit this statement.