Taking Stock: Baffert and The Avengers 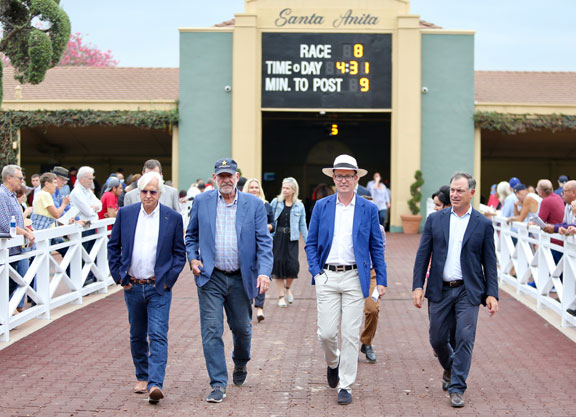 When the balance of power shifts anywhere, one side or another usually makes a move to regain equilibrium. It’s the way of the world, the yin and the yang of natural order.

In Avengers, a film based on Stan Lee characters from Marvel Comics, a guy named Nick Fury, head of S.H.I.E.L.D., acts to save the earth from an outside threat by recruiting a bunch of superheroes, including Iron Man, Captain America, the Hulk, and Thor. There’s a self-named version of this group in racing now, and they’re part of the long list of owners associated with Charlatan (Speightstown), the impressive winner of one of the divisions the Grade l Arkansas Derby for trainer Bob Baffert. From what I can ascertain, the Fury character is SF Bloodstock’s Tom Ryan, and there can be no doubt that Captain America must be Baffert, because his Nadal (Blame) won the other division of the Arkansas Derby just as impressively for another ownership group headed by George Bolton.

“CHARLATAN delivered
BOB delivered
SPEIGHTSTOWN delivered
Donato-Henry-Frankie-Dr Hore-what a team. Bred the right way-raised the right way and trained by the best.
A great syndicate, great for racing.
So proud that our owners donated 10% to @NewVocations
#Avengers #SF”

The donation to New Vocations was an outstanding gesture from this group during these fraught times, but it’s what superheroes tend to do. Ryan’s use of the hashtag “Avengers” next to “SF” left no doubt that this group has arrived, because its principals also control Baffert’s Grade l winner Eight Rings (Empire Maker) and the exciting Grade ll winner Authentic (Into Mischief), who most likely will attempt to get his highest-level certificate next in the Grade l Santa Anita Derby, if all goes to plan.

Baffert said the “Avengers” have more promising colts in the pipeline, too, which is quite a haul for them given that the breeding rights to Eight Rings have already been sold to Coolmore and those to Charlatan were acquired just the other day by a syndicate headed by John Sikura’s Hill ‘n’ Dale.

The principals in #Avengers are SF Bloodstock (Gavin Murphy and Ryan), Starlight Racing (Jack Wolf), and Madaket (Sol Kumin), all of whom were minority partners in Baffert’s Triple Crown winner Justify, whose principal owner was Kenny Troutt’s WinStar.

Since Justify, Ryan, who operates SF, and Murphy have put together a new syndicate of owners, including some other minority partners, to buy colts to send to Baffert in an attempt to emulate Justify’s success, and so far they have been spectacularly successful, with the date-adjusted Classics still to come. In Charlatan, the colt’s breeder, Stonestreet’s Barbara Banke, also stayed in for a significant position, and the ownership includes Fred Hertrich lll and John Fielding and Golconda Stables (Ben Goldberg and Elliot Friman). The same group, without Stonestreet but now including Coolmore, owns Eight Rings, and Authentic, for now, is owned by the original group of SF, Starlight, Madaket, Hertrich, Fielding, and Golconda.

The actual “Avengers” are the buyers for this syndicate of owners, referenced in Ryan’s tweet by their first names, and they are a formidable group. I don’t know who’s who as far as Iron Man, the Hulk, and Thor are concerned, buy they’d come from this bunch that includes Ryan and Australian Henry Field of Newgate Stud, representing SF; Baffert; Donato Lanni, longtime shortlister for Baffert and one of the best in the business in spotting unraced talent; and Frankie Brothers, a retired Classic-winning trainer who is Starlight’s man on the sales grounds. This group’s veterinarian is Dr. Michael Hore of Hagyard, perhaps the only vet who “passed” Justify as a yearling when others had “failed” him.

“Donato came up with the [name of] Avengers,” Baffert said. “‘We’re going to look at an Avengers colt,’ he’ll tell me, when he wants to show me one for this group. Tom and Gavin just thought of this idea, [of buying] all colts, no fillies. Everybody owns, like, a small piece, there’s a lot of people, and you spread it out so you have a lot of action–really good action–and it’s a great concept, because we don’t buy fillies and we buy colts at that level–$500,000 to $700,000. We don’t like to go to a million. But the concept of spreading risk and buying a lot of colts as a group is a great idea, because you go to these sales and horses are expensive, and some of these guys might have bid against each other for these colts, but now they’re on the same team and we’re buying together and it gets a lot of people involved. It was a great idea, and when they asked me about it, I said, ‘Man, I like it.’ It’s a lot of work, but it’s fun, and it’s fun for me because I’m the one who gets to benefit from it all, ’cause I get to feel like, uh, Nick Saban, you know? I’ll take that one, that one, and that one. Star recruits.”

Baffert said that Lanni, Ryan, Field, and Brothers put a lot of effort in doing the groundwork, and all of them need to “love” a colt before they buy him. “When I get there, they’ve shortlisted horses, and I’m a pair of fresh eyes,” said Baffert, who enjoys working with the Avengers. “Henry Field, he’s got so much energy and is really fun to be around. He loved Justify [when Field was with the buying group for Justify that included WinStar, China Horse Club and SF]. He was a big part of that. He’s a really sharp guy, too. He’s got a really keen eye for a horse. When we’re together, he’ll ask what I like or don’t like, and he’ll say, ‘I like this’, or ‘I like that,’ and you feed off each other. Like, I might say, ‘I don’t like that,’ or ‘I’ve had trouble with that,’ and he wants to learn, always asking questions, and in this business you need to be curious to be successful. Tom puts a lot of time into it, too, and Frankie is Starlight’s man, and when he sees a good colt, he lets the Avengers know to include him in the group we’d look at. And Dr. Hore, I like him and the way he evaluates a horse. Nothing too complicated.”

Charlatan was a $700,000 purchase at Keeneland September, a graduate of the “Stonestreet Bred & Raised” program. His dam is Grade ll winner Authenticity, a daughter of Quiet American who was multiple Grade l-placed and earned $883,362 for Padua. She was sold to Stonestreet for $1.2 million at the Fasig-Tipton Kentucky fall mixed sale shortly after a third-place finish in the 2013 Breeders’ Cup Distaff.

“Barbara Banke, she bred him, and if she were a car collector, she’d have every freaking nice car in the garage” Baffert said. “She’s collected these speed-fast mares with [advisor John] Moynihan, and those are the ones that do it.”

Baffert said Lanni first took him to the barn to see Charlatan with the group. “Donato said, ‘You gotta look at this horse,’ and I’ll never forget it. We went over there, and when we all saw him, we were, like, ‘Wow, look at this guy.’ He’s better looking than his sire. Speightstown looked like a sprinter, a shorter-coupled horse, but this guy was longer, with a big, beautiful hind end and hip on him, and he took after the mare, so we all thought he’d stretch out, too.” Turns out, the group was spot on with him.

“He’s 15.3, and he’s got so much speed and raw talent on him. He’s like a smaller version of Justify,” Baffert said.

Speightstown is an outstanding stallion, but until recently he’d never had a Grade l winner before July of its 3-year-old season. Sharing, who won the Breeders’ Cup Juvenile Fillies Turf last fall, got him off that schneid, but Charlatan has now become his first colt and first on dirt to also accomplish this – and keep in mind, this is after more than 1,000 foals and 18 winners at the highest level.

Baffert, aka Captain America, has done this sort of thing before, though. Justify, for example, was the first to win the Kentucky Derby without racing at two since Apollo in 1882. And Baffert has a knack for training a sire’s best runner, such as Arrogate (Unbridled’s Song), Justify (Scat Daddy), American Pharoah (Pioneerof the Nile), Point Given (Thunder Gulch), Silver Charm (Silver Buck), etc. I’ve listed more here. In time, Charlatan and Nadal could be added to that list, too.

In the meantime, the Avengers are riding a great streak of success with Baffert at the helm, which means that another group will soon set their sights on them looking to balance out that power again. That’s just the way it is.