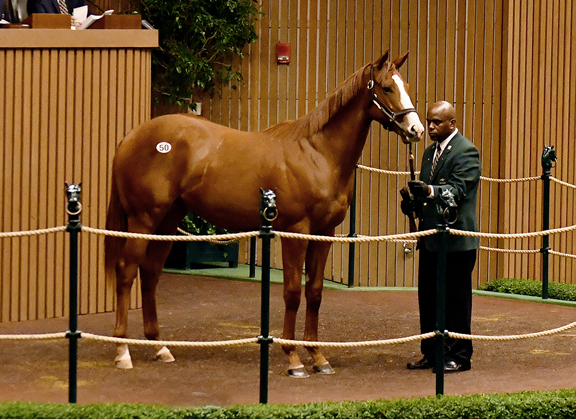 Justify as a yearling | Photos by Z

Back in the early days when Bob Baffert was a cowboy transitioning from quarter horses to Thoroughbreds, he took a trip to Lexington to get an education. He visited some major stud farms like Claiborne and Lane's End to see to see what good Thoroughbreds looked like. “It was '89–the year Secretariat died,” he said. “I saw him at Claiborne, I saw Nijinsky, Mr. Prospector, Fappiano. After seeing all the horses, when I saw Danzig, I said, 'I can do this.' I loved Danzig.” The blocky and heavily-muscled son of Northern Dancer appealed to Baffert's speed-loving quarter horse eye.

Ironically, Baffert isn't known for his Danzigs, but that's because he couldn't afford to buy them. “When I first got in, I had a small pocketbook,” he said. “I was looking for $20,000 horses and trying to stretch it to $30,000.” He wasn't known for training Scat Daddys, either, until Justify popped up. “I didn't even look at Scat Daddys [at the sales]. I figured they're going to be turf, and Coolmore's going to buy them all up, the good ones, anyway.” For that matter, Baffert isn't particularly associated with any one big-name sire, like D. Wayne Lukas was with Storm Cat or Aidan O'Brien is with Galileo and War Front. What Baffert's resume clearly shows, however, is a penchant for training one of the best, if not the best, offspring of any random sire, good or bad. That's a skill.

Justify, who's out of the Ghostzapper mare Stage Magic, is odds-on to become his sire's best runner, just like American Pharoah is for Pioneerof the Nile and Arrogate was for Unbridled's Song. West Coast is one of six millionaires for Flatter, but is his sire's only Eclipse Award winner. These three were consecutive champion 3-year-olds for Baffert, and Justify is on a path to make it four straight. A win tomorrow in the Preakness would solidify his chances.

The post-cowboy Baffert who now favors crisp white button-down shirts at the sales has evolved through the years in his tastes for yearlings and 2-year-olds, too. He didn't see Justify as a yearling at Keeneland–“I didn't have a hand in this one,” he said; WinStar, China Horse Club, and SF Bloodstock bought the John D. Gunther-bred colt for $500,000–but he's since seen photos of the chestnut as a weanling and yearling, and said he was picture-perfect and looked like a halter horse even then.

“He's the most gorgeous horse. He's between 16.2 and 16.3, he's big and strong, but he's not big like a Point Given, who was a big, slab-sided horse. He's a muscular horse, muscle on muscle, and that makes him look even bigger, and it makes him look fast.” And fast horses have always been Baffert's

preference and trademark. He just prefers a bit more leg, stretch, and scope now, added to Danzig-like musculature, and he's got that combination in Justify.

When did he know Justify was out of the ordinary? The colt was initially with his assistant at Los Alamitos instead of among the first string horses with Baffert at Santa Anita.

“We got him in in November.” said Baffert. “Elliott Walden had put a good foundation in him at WinStar and then he'd had a few breezes at Keeneland with [Rodolphe] Brisset before they sent him to me. We like to go easy with them at first, not ask them for too much speed. But my assistant in Los Alamitos was telling me he was special. When I got him, first time I worked him in January, I knew he was really, really special. Elliott Walden kept telling me, 'I sent you a really, really nice colt.' After I worked him, I told him he was a really nice colt, and Elliott said, 'I've been telling you that. That's why I was trying to get him over to you [at Santa Anita].'”

Justify's remarkable ascension in a short time frame is a testament to his sire, family, constitution, and physique, and it's easy to assume that any competent trainer could have developed such a well-bred horse similarly. But Baffert has accomplished a few things with Justify that have shattered some barriers: he won the Kentucky Derby with a horse that hadn't raced at two, who was the first Storm Cat-line winner of that Classic, and whose sire was more widely renowned for turf horses, not for 10-furlong horses on dirt.

Baffert's uncanny ability in developing lesser-pedigreed horses, some by stallions well off the commercial path, brings into sharper focus his skills as a trainer and manager and his eye for a horse. Here's a partial list from an old blog post of mine of Grade I winners trained by Baffert that were the best offspring for their sires:

Downthedustyroad (Storm and a Half)

Midnight Lute and Pussycat Doll (both by Real Quiet)

First Dude (Stephen Got Even)

Hoppertunity (Any Given Saturday)

“There's some sires I just wouldn't buy, and I've been burned by them,” Baffert said. “My wife Jill tells me now, 'Don't be a sire snob when you go to the sales. Go with your gut if you like the horse.'” Ironically, there isn't a hint of snobbery in the above list.

“When I got into the business early on, I was talking with Johnny T.L. Jones Jr. [of Walmac International] one day, and I was telling him 'I don't like that sire or this one,' and he said, 'Boy, any sire can get you one good one. You just gotta find him.' [Mike] Pegram reminds me of that all the time. He'll say, 'This could be that good one.'”

It's a lesson Baffert has learned well, and he's crafted a Hall of Fame career on that precept.