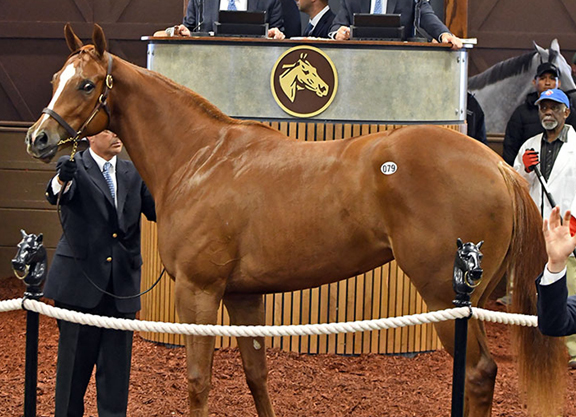 The Fasig-Tipton Midlantic 2-Year-Olds in Training Sale produced strong results during its opening session in Timonium Monday, with both average and median up from a year ago and the buy-back rate down. A total of 162 juvenile sold for $11,537,500 Monday. The average of $71,219 was up 4.2% from last year's opening session of the two-day auction, while the median rose 17.6% to $40,000.

“We always try to match what we did last year or do better,” said Fasig-Tipton Midlantic Sales Director Paget Bennett. “So to exceed last year was great. But everybody was so excited about the quality of the horses they were bringing. And they know what can sell well here. You bring a good horse, a good horse sells. So we were cautiously optimistic coming in and the results were good.”

A filly by Smart Strike brought the day's top price when selling for $525,000 to Chris Brother's Xavier Bloodstock, bidding on behalf of a partnership. The juvenile was consigned by Hartley/DeRenzo Thoroughbreds. The session topper was one of six to sell for $300,000 or more on the day. That figure was five a year ago when the session was topped by a $600,000 colt by Medaglia d'Oro.

Bennett is hoping the sale will only get stronger as it moves into its second session Tuesday.

“Everyone seems to be saying that the strength in their consignments just happens to fall tomorrow,” she confirmed.

Tuesday's final session of the Midlantic sale gets underway at 11 a.m.

Smart Strike Filly Worth the Wait

A filly by Smart Strike, who turned heads with a :10 flat co-bullet breeze during last Thursday's third session of the under-track preview, proved popular in the sales ring Monday in Timonium when selling for $525,000 to the bid of Chris Brothers of Xavier Bloodstock.

“It's for a partnership,” Brothers said after signing the ticket out back. “They've been in it for a little while, but it's a new formation of people. It's a good group.”

Hip 79 had originally been scheduled to breeze during last Tuesday's first session of the under-tack preview, but had the work pushed back a couple of days after an untimely nick on a hind leg. When she eventually did take to the Timonium track, Brothers admitted the result was a major selling point.

“I thought she had one of the best breezes I've ever seen over this track,” he said. “And it's hard to knock a Smart Strike filly–she has some residual value down the road if she can make it.”

The filly had worked in :10 2/5 prior to being withdrawn from the Fasig-Tipton Gulfstream Sale earlier this year. Brothers said the youngster had matured in the interim.

“She has grown up some and she's levelled out,” he commented. “She was a little hip high at the sale down there. She's come into herself very nicely.”

The juvenile is out of stakes winner Salty Response (Cozzene), a half-sister to multiple graded stakes winner Salty Strike (Smart Strike). She was consigned by Hartley/DeRenzo Thoroughbreds, which purchased her for $275,000 at last year's Fasig-Tipton Saratoga sale.

Her final price in Timonium was no surprise to Brothers.

“Quality always sells well and I thought she was top quality here for sure,” he explained.

Into Mischief Filly to Lanni

Bloodstock agent Donato Lanni, bidding on behalf of an undisclosed client, outlasted a determined Jeremiah Englehart to secure a filly by Into Mischief for $425,000 early in Monday's first session of the Fasig-Tipton Midlantic Sale.

“He ticked all the boxes,” Lanni chuckled to the assembling press just as the Fasig-Tipton ticket runner pointed to the ticket he was signing and said, “Don't tick that box.”

Out of Pooh Corner (Tapit), the filly was consigned by Wes Carter on behalf of her breeder Carolyn Vogel. Vogel purchased Pooh Corner for $105,000 at the 2010 Keeneland September Yearling Sale. The juvenile, the mare's second foal, RNA'd for $39,000 as a Keeneland November weanling in 2015. Her third dam is graded stakes winner Katilac ofthestars (Katowice).

The youngster will be trained by Bob Baffert.

Speedway Also Gets Into Mischief

Trainer Bob Baffert will be receiving another Into Mischief filly graduate of the Midlantic sale after Marette Farrell, biding on behalf of Peter Fluor and K.C. Weiner's Speedway Stable, went to $425,000 to secure a filly by the Spendthrift sire.

“We loved her video,” Farrell said after signing the ticket on hip 123. “We loved her sire–I think he's an amazing sire. We wanted a filly to go to Bob Baffert and we think she will fit his program perfectly. We loved her in the back walking ring–she has a lot of class.”

The juvenile, who worked a furlong in :10 2/5 last week, is out of graded stakes placed So Long Sonoma (American Chance) and is a half-sister to Rastanora (Dynaformer).

Farrell has been busy building up the Speedway roster with 2-year-olds this spring. She purchased a colt by Orb for the operation for $320,000 at the Barretts March Sale and spent $650,000 for a filly by Malibu Moon at the OBS April sale.

Speedway has campaigned Grade I winners Hard Not to Like (Hard Spun) and Noted and Quoted (The Factor), as well as graded stakes winner Collected (City Zip).

Asked what she is looking for in prospective Speedway runners, Farrell laughed, “Good horses.”

The bloodstock agent admitted bidding has been competitive at the juvenile sales all spring.

“The sales are very strong right now,” she said. “We try to pick our spots and be clever and not get caught up. I am happy with everything we've bought for them.”

Consigned by McKathan Bros., agent, the youngster was purchased for $180,000 by EQB on behalf of Zayat Stables at last year's Keeneland September Yearling Sale. Zayat Stables has enjoyed plenty of pinhooking success this spring. The operation sold the OBS March sale-topping Congrats filly for $1.7 million. That filly was a $250,000 Keeneland September yearling purchase. Zayat Stables also sold a $1-million Pioneerof the Nile colt at OBS March. It had acquired that colt for $240,000 as a Keeneland November weanling.

EQB's Patti Miller agreed the Zayats' pinhooking prospects have more-than-lived up to expectations this spring. EQB spent $1.63 million on behalf of the Zayats at public auction on horses returned to the sales ring as 2-year-olds this year. The re-sold 2-year-olds have now grossed $4.155 million.

Of the Into Mischief's appeal as a yearling, Miller recalled, “I thought she was very athletic. And obviously, I love Into Mischief–I've had great luck for Mr. [Ken] Ramsey with Into Mischief, with Vicar's in Trouble. I think he's a working-man's sire, a blue-collar sire, but they show up and run. They can be beautiful and not show up. And what I loved about her is exactly that–she showed up. She is beautiful. The pedigree is on the way up and her cardio was spectacular. Her high-speed film was spectacular. I loved her last fall. She was a very special filly and I am honored somebody like Marrett, who has a fabulous eye, thought enough of her to step up with that kind of money.”

Jeff Treadway, who races as Treadway Racing Stables, bidding alongside bloodstock agent Charlie Boden, purchased a colt by Blame for $375,000 Monday in Timonium. Hip 195, who worked a furlong in :10 1/5, is out of Unbridled Empire (Empire Maker), a half-sister to Grade I winners Fourty Niners Son (Distorted Humor) and Cindy's Hero (Sea Hero). The pedigree received a timely update when the juvenile's 3-year-old brother Arklow (Arch) won the GII American Turf S.

“We loved his breeze and we loved the way he acted at the barn,” Boden said. “He is a really nice colt. And the update didn't hurt. I'm not sure this is necessarily a turf horse like his brother, but you love it when there is a horse that looks like something special and he looks like a pretty special horse.”

“I loved him,” Treadway, who has been in racing since 2009, said. “He was a the top of my list from the get-go. The dam looks like she's going to be a producer and with that update to the catalogue, it looks like he could be a special horse.”

The Blame colt is the third juvenile purchase of the spring for Treadway, who acquired two at the OBS April sale.

He called the newest acquisition, “By far the nicest, I believe. Fingers crossed.”

The bay colt was consigned by Crupi's New Castle Farm, which purchased him for $100,000 at last year's Keeneland September Yearling Sale.

I Want Revenge Colt a Record for Pick View

Lifelong horsepeople Joe Pickerrell and fiancé Courtney Roberts, who have been pinhooking and consigning as Pick View LLC for only about five years, enjoyed a highwater sale Monday in Timonium when selling a colt from the first crop of I Want Revenge for $245,000 to Joe Sharp on behalf of Grand Oaks. The couple purchased the dark bay for $50,000 at last year's Fasig-Tipton Kentucky October Yearling Sale.

“We found him at Fasig October at Martin Keogh's MJK Bloodstock,” Pickerrell said of hip 250. “We've landed on a bunch of Martin's horses over the years and he has a really good eye picking out babies. When we saw him at the yearling sale, we knew we couldn't go home without him. We would have really regretted it if we hadn't brought him home. And he has just been the top of the class the whole year.”

Of the juvenile's final price Monday, Pickerrell said, “We buy them to sell them, so we would have been happy at quite a bit less than that. He exceeded our expectations by quite a bit.”

Pickerrell, son of trainer Bill Pickerrell, grew up on his family's Thoroughbred farm in Ohio and moved to Ocala in 2007. Florida native, Roberts is an accomplished barrel racer and the couple met while pursuing Equine Business Management degrees at the College of Central Florida.

“We have relatively small numbers,” Pickerrell explained. “We're very hands on. We're in the barn everyday and we both ride. So we are going to try it keep it that way.”

“That's two years in a row we broke our record,” Pickerrell said. “Last year was $225,000 at Fasig in Miami. So this is our new record. We are meeting our goals.”