Streaking 'Sneaking' to Beat in TCA 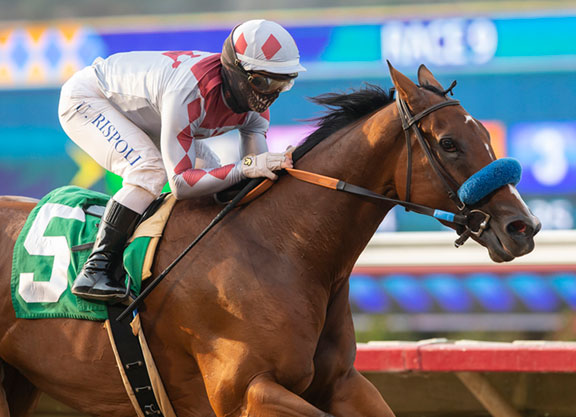 KMN Racing's Sneaking Out (Indian Evening), winner of back-to-back graded stakes on the west coast, will try to punch her ticket to the Breeders' Cup in Saturday's GII Thoroughbred Club of America S. at Keeneland, a “Win and You're In” qualifier for the Filly & Mare Sprint.

Winning three of four to start her career, the California-bred was disqualified out of a score in the Angel's Flight S. last spring and finished a narrow second in both the GII Summertime Oaks and state-bred Fleet Treat S. Last but one in the GIII Torrey Pines S., the bay was benched for over eight months, returning with a neck allowance triumph Apr. 25 at Oaklawn. Fifth in the GIII Winning Colors S. May 30 at Churchill, the homebred returned home to the Golden State to annex the GII Great Lady M. S. July 4 at Los Alamitos and GIII Rancho Bernardo H. Aug. 21 at Del Mar.

Speedball Lady's Island (Greatness) figures to go as fast as she can for as far as she can. Last winter's GIII Sugar Swirl S. romper, the 6-year-old added victories in the Minaret S. and Florida-bred Musical Romance S. this season. Shipped up to Saratoga by Danny Gargan last out, the dark bay set a blistering pace of :21.64 and :43.81 in the GII Honorable Miss H. before settling for second behind MGISW Come Dancing (Malibu Moon).

Tom Durant's Dos Vinos (Twirling Candy), a winner of three of five in her young career, gets the acid test after a pair of allowance triumphs May 24 at Churchill and over track and trip July 9.