Snowfall Dominant In The Yorkshire Oaks 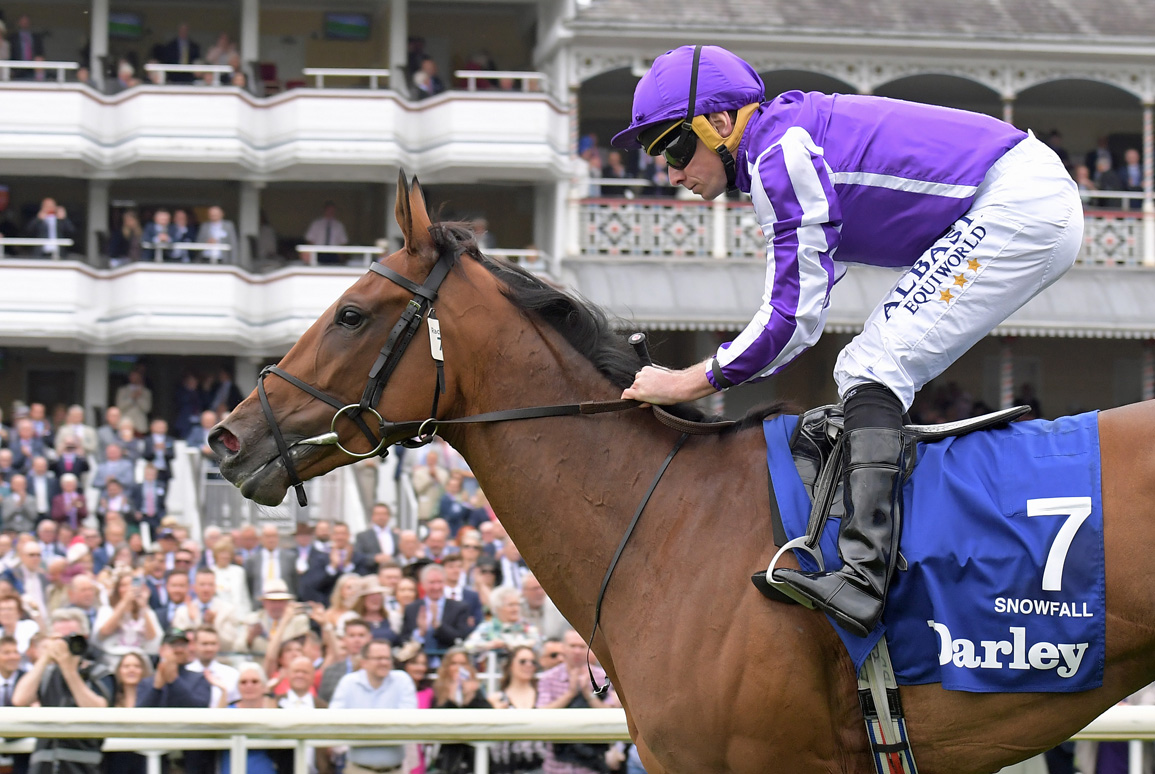 Another group 1, another wide-margin success for the rampant Snowfall (Jpn) (Deep Impact {Jpn}) who emulated User Friendly (GB) (Slip Anchor {GB}), Ramruma (Diesis {GB}), Alexandrova (Ire) (Sadler's Wells) and Enable (GB) (Nathaniel {Ire}) in adding Thursday's Darley Yorkshire Oaks to her Epsom and Irish Oaks victories. Anchored with only Albaflora (GB) (Muhaarar {GB}) behind as her stable's La Joconde (Ire) (Frankel {GB}) set an honest tempo, the 8-15 favourite tracked Wonderful Tonight (Fr) (Le Havre {Ire}) into the straight but was left in front as her chief rival paid for her free-running tendency. On her own for the last 2 1/2 furlongs, Ballydoyle's sixth winner of this prestige event hit the line with four lengths to spare over Albaflora, with La Joconde sticking on for third, 2 3/4 lengths away. Wonderful Tonight was ultimately disappointing in fourth, beaten 8 1/2 lengths in total. “It felt like a truly-run race and as soon as I moved on her she was there very quickly,” jockey Ryan Moore commented. “The race was as good as over from the four to be honest, she felt exceptional today. I thought Wonderful Tonight was a genuine top-level performer and maybe we didn't see the best of her today for whatever reason, but she keeps winning her races well and you can't ask her for anymore than that. The last two furlongs, there was no real serious question asked and she's very, very good.”

Snowfall's underwhelming juvenile campaign has been well-documented by now, with seven outings beginning over an extended five furlongs at Navan in June and culminating in the G1 Fillies' Mile at Newmarket in October, where she was the subject of a case of mistaken identity with the stable's other Classic heroine Mother Earth (Ire) (Zoffany {Ire}). Those runs yielded just one maiden win over seven furlongs at The Curragh and one placing, which was on that aforementioned racecourse bow, but it was in this track's G3 Musidora S. that the watershed came at a now-laughable starting price of 14-1 on her 3-year-old re-introduction May 12. Ryan Moore thought best to leave her to Frankie for the Oaks June 4 and he was made to suffer on Santa Barbara (Ire) (Camelot {GB}) as she bounded clear to set a record-winning distance in the easy ground.

Her subsequent Irish Oaks romp at The Curragh July 17 was enough to convince any remaining doubters as to her merit, but this served as a new examination taking on the likes of the proven Wonderful Tonight. While David Menuisier was happy to let that G1 Prix de Royallieu and G1 QIPCO British Champions Fillies & Mares S. heroine run on this ever-quickening surface, she over-raced for William Buick even allowing for having an ideal target in the 150-1 outsider La Joconde. Hollie Doyle enjoyed a real tune from that freewheeling runner as she had when also riding for this stable in the Dante here in May and she managed to see off all bar the rearguard, with the winner in a class of her own and Albaflora providing Kirsten Rausing with another highlight in a stellar 2021 and a second consecutive runner-up placing in this after Alpinista (GB) (Frankel {GB}) followed home Love (Ire) (Galileo {Ire}) 12 months ago. With Wonderful Tonight running well below-par, the clock remained the only true guide to Snowfall's performance and three impressive sub 12-second splits in the straight saw her set the fastest time in this race since Catchascatchcan (GB) (Pursuit of Love {GB}) in 1998.

“She'd been doing everything well and was thriving at home and putting on weight,” Aidan O'Brien said. “She is very relaxed and has got very professional. Ryan said he ended up being there way too early, but that's what she does–she quickens very well. I was a little bit taken aback by her in the parade ring and how well she had done–she looked like a filly that was going to come on for the run and she's matured from a baby 3-year-old into a very mature one. The lads will decide whether she takes another run before the [Oct. 3] Arc, either at Longchamp or Leopardstown and it doesn't matter about the ground with her. If St Mark's Basilica comes back for Leopardstown, she could go to Longchamp. She gets a mile and a half very well, has everything going for her and has a beautiful mind. She had a few blips last year, but it might have worked to her advantage as she learnt a lot before she ran in anything big. That experience of travelling to England is really showing now and it's very interesting the way it's happening for her. She is a filly that travels very well and is behaving like a filly older than she is, so it's very exciting.”

Ralph Beckett said of Albaflora, “There was a great deal of discussion whether we were even going to run, but she was really well and thriving at home. When the ball is at your feet you have to kick it. We didn't win, I'm not sure we ever thought we were going to but I was pretty sure she'd run well if things went our way. She enjoys being ridden like that. To go and do that today when she's really a soft-ground filly as well is great.”

Wonderful Tonight's trainer David Menuisier was far from downbeat as he retained laser-focus on the Arc. “William [Buick]'s report was that she's not the same filly on good ground as she is on soft,” he explained. “I told him before the race if he felt she wasn't going on it to look after her. The plan today was to give her a good blow before the next step with the Arc as the target and that's what we did. I'm really happy with the run, considering the conditions were not in her favour so I think there was no harm done. Last year when she ran in the Vermeille on good-to-firm ground she ran a similar race to today, we know when the ground gets softer she can easily improve by 10 lengths or more. She's basically the same filly she was last year on this sort of ground and that is why I'm not disappointed. We had to give it a go as I wanted her to have two races before the Arc, as we saw at Goodwood that when she gets fresh she is keen. Her next race will be at Longchamp, but it could be the [Sept. 12 G2] Prix Foy rather than the [G1] Prix Vermeille, because the fillies are better than the colts this year!”

Snowfall is the first foal out of the G3 Give Thanks S. and Listed Staffordstown Stud S. winner and G2 Blandford S. runner-up Best In the World (Ire) (Galileo {Ire}), who is a full-sister to three other Galileos headed by the stable's prior G1 Prix de l'Arc de Triomphe heroine Found (Ire) successful also in the GI Breeders' Cup Turf. The others are the G3 C. L. Weld Park S. winner Magical Dream (Ire) and last year's G3 Flame of Tara S. winner Divinely (Ire), who is usually in attendance when Snowfall appears and followed her home in second in the Irish Oaks and third at Epsom before trailing in sixth here. Found is also the dam of last year's G2 Vintage S. winner and GI Breeders' Cup Juvenile Turf runner-up Battleground (War Front), while they are out of the G1 Lockinge S. and G1 Matron S. heroine Red Evie (Ire) (Intikhab). Best In the World's unraced 2-year-old full-brother to Snowfall is in training at Ballydoyle and named Newfoundland (Ire), while she also has a yearling colt by Dubawi (Ire).