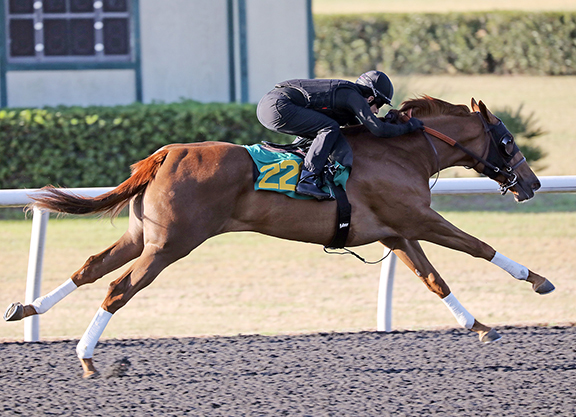 Seven more juveniles matched Thursday's fastest furlong of :9 4/5 during Friday's second of three under-tack previews for the OBS March sale, while another two tied the top quarter-mile time of :20 2/5.

Hip 220, the morning's first breezer, kicked off a strong day for last year's leading first-crop sire Nyquist. Consigned by Top Line Sales, Agent XVII, she was one of two Nyquist fillies to go in :9 4/5. The $67,000 KEESEP RNA, a June 3 foal, is out of a half to speedy GSW This Ones for Phil (Untuttable).

The Darley resident was also represented by hip 304, who covered a quarter in :20 2/5 for Ciaran Dunne's Wavertree Stables, Inc. The $200,000 Keeneland September grad is a half-sister to two stakes horses out of a half to Negligee (Northern Afleet), champion 2-year-old filly in Canada and winner of the 2009 GI Darley Alcibiades S. over Keeneland's old Polytrack surface.

Super sire Into Mischief had another productive day, as did his buzzed-about freshman son Practical Joke.

Into Mischief's :9 4/5 workers, both fillies, were hips 224 and 291. The former, who cost $130,000 at KEESEP, is consigned by Gene Recio, Agent XI. She's out of a half-sister to the dam of MGSW and MGISP young sire Good Samaritan (by Harlan's Holiday, like Into Mischief). Click for breeze.

Hip 291 is offered by Raul Reyes's King's Equine, Agent I. Bred by Spendthrift Farm and bought back for $85,000 in September, she's out of SW and GISP Topic (Discreet Cat) from the family of champion and dual Classic winner Afleet Alex. Spendthrift paid $5250,000 for Topic in foal to American Pharoah at KEENOV '17.

Precocious three-time Grade I winner Practical Joke was represented by hips 309 and 311.

Rounding out the furlong bullets was hip 196 from Silvestre Chavez Thoroughbreds, Agent II. The Florida-bred son of Chitu is out of hard-knocking, stakes-placed Satan's Mistress (Songandaprayer).

The other :20 2/5 breezer was hip 357. The full-brother to MSW juvenile Adventurous Lady (Kantharos) cost $220,000 at September and is consigned by Woodford Thoroughbreds, Agent II.

The last round of OBS March breezes begin Saturday morning at 8:00 a.m., and will be broadcast live on the TDN and OBS websites. Sale sessions will take place next Tuesday at Wednesday starting at 11:00 a.m. Visit www.obssales.com for more.