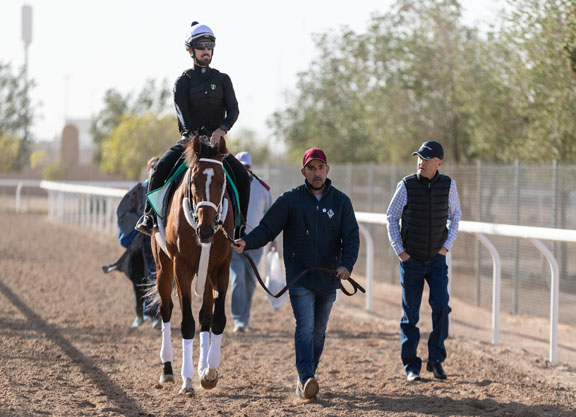 That's what we have heard from the owners who employed Jason Servis and Jorge Navarro and have spoken up in the aftermath of indictments that are not only shocking but threaten to do severe and irreparable damage to the sport.

How could an owner employ someone who performed training feats that were, basically, impossible if they were clean, and not know they were dirty? Everyone else knew. The gamblers, the honest owners and trainers, the guy working the hot dog stand on the second floor. Also racetrack executives and racing commissioners. As clueless as they now seem, they knew.

According to the indictments, Servis and Navarro doped their horses with a variety of garbage and the horses then went out there and ran the proverbial hole in the wind. Navarro won 217 races in 2019, clicking at 28 percent. Servis won 168 races in 2019, winning at 29 percent. He also managed the campaign of Maximum Security (New Year's Day), on the surface, the best horse in racing up through his win in the $20 million Saudi Cup. Combined, Servis and Navarro horses earned over $19 million in 2019 alone,.

While no one is suggesting that any owners were directly involved in the doping scheme or should go to prison, it just doesn't seem right that they will all walk away from this unscathed. Most have already moved on, transferring their horses to other trainers, in some cases, trainers that have also aroused suspicions. In Florida and New York, there are “stand down” periods in place and the horses coming out of the Servis and Navarro barns won't be allowed to race for a while. Again, not good enough.

The answer to this is not going to come from anyone in authority. We have heard from some owners of horses that were beaten by Servis and Navarro saying they want disqualifications so they can get the money they deserve. It's not going to happen, at least not in the U.S.

For those owners involved who have a conscience, any maybe, well, some of them don't, they need to stand up and take some responsibility and do something to make amends to a sport that has been crippled by this.

Start by saying something along these lines: “I understand that the money my horses have earned while racing for (fill in the blank) was tantamount to stealing because they were drugged. I find that unacceptable and I cannot in good conscience accept that money.”

Then write a check.

Not to the owners of the horses who finished second or third behind the drugged horses. A rich guy writing a check to another rich guy isn't going to heal the wound. Instead, write a check to the various charities that are working so hard to make the sport better. Write a check, a big check, to the Thoroughbred Aftercare Alliance. To the Disabled Jockeys Fund. To Thoroughbred Charities of America. To any effort or organization that assists backstretch workers and their families.

The first two in line to do so should be Gary West and Michael Dubb. Both are extremely wealthy men.

In a 2006 Forbes survey, West was listed as the 354th most wealthy person in the U.S. According to the indictment, West was employing a trainer in Servis that cheated, which would mean that the $11.8 million earned by Maximum Security was earned through fraudulent means. Can you imagine what an $11.8 million check from West to the Thoroughbred Aftercare Alliance could do to save the lives of racing's blue-collar retirees?

“(The allegation against Servis) is a very serious charge,” West said in a statement. “It threatens the integrity of Thoroughbred racing, an industry and sport that I have been a part of and have cared deeply about for decades.”

Prove it. Give the money back.

Dubb is another very prominent and very wealthy owner who used Servis. The many horses Servis trained for Dubb include World of Trouble (Kantharos), who won two Grade I races last year and earned $1.2 million in his career. That doesn't include whatever money Dubb received in the stallion deal for a horse now standing at Hill 'n' Dale.

“To be involved with something that brings a black eye to the game is, beyond words, sickening to me,” Dubb said.

Prove it. Write a check.

I chose to believe that Dubb and West are both good, decent people, people who made a mistake by hiring bad apples. Both have given away millions through philanthropic efforts they support. Dubb has dug deep into his own pocket to build and donate daycare centers for backstretch workers at the NYRA tracks. They need to lead by example and they need to do more. The FBI says your trainers stole from the sport you profess to love, you need to make up for it. You need to give something back.

What's Next in Horse Doping Scandal?

There are rumors everywhere, but it remains anyone's guess as whether the 29 people now tied up in the scandal will be all that will be charged or whether they are the tip of the iceberg. The U.S. Attorney's Office won't say, only that the investigation is ongoing.

I can see a scenario where the feds can't pack up their bags soon enough and, if so, there probably won't be any more major indictments. The FBI has a lot more important things to worry about than horse racing and the feds are already on record saying that they stumbled into the racing investigation while looking into something else. Do they really want to invest any more of their resources in something that is, in the grand scheme of things and to most people, not that big of a deal?

The other scenario is that the government will lean on the vets and drug suppliers and cut them a deal to serve up names of the others who they were supplying with performance-enhancing drugs. It's highly unlikely that their customers were limited to the handful of trainers that have been indicted. If that turns out to be the case, the floodgates could open and the number of trainers that go down could be staggering.

These guys are facing five years in prison and will no doubt sing if offered a deal.