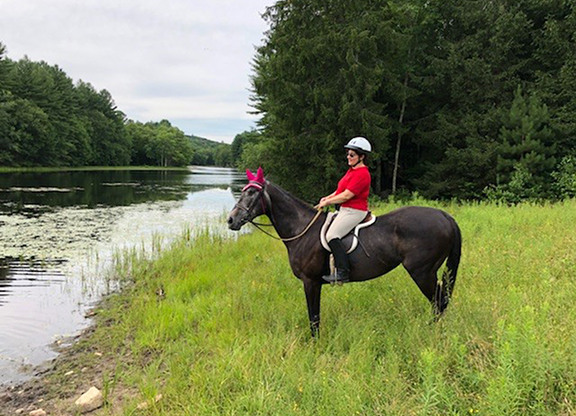 In 2018, Wendy Cyr wasn't quite ready to get another horse but often scanned the available off-track Thoroughbreds on the Thoroughbred Adoption Network. This time was different. She came to a dark gray one-eyed mare named Cosmic Serenity (Cosmonaut- Gracefully Done) aka Serena, listed by ACTT Naturally.

Cyr's last horse was a gray mare named Serena who had to be euthanized at age 20 and her childhood mount was an off-track Thoroughbred with one eye who took her through pony club. She showed the post to her husband.

“My husband said to me, 'if you don't go meet her, you will never know,'” said Cyr. “It felt like the universe was telling me something.”

Their instincts were correct. When Cyr met Serena, she fell instantly in love. Because Cyr had prior experience in training and riding a one-eyed horse, she wasn't put off by the fact that Serena was missing an eye. To facilitate the adoption, ACTT Naturally Founder Valerie Buck drove the mare to Connecticut.

“My first off-track Thoroughbred had one eye and we did everything,” said Cyr. “It was never an issue. I just learned how to move around him on the ground.”
“Serena was meant for me and I just knew it.”

With her children grown and settled, Cyr, who had just turned, 50 was planning on spending more time doing things for herself. She had been saving money to renovate the barn and replace the fencing at her house before getting a horse. With Serena entering her life now, Cyr needed a plan B.

“I had to take a second job feeding 20 horses at the boarding facility to keep Serena there until I got my own farm in order,” said Cyr. “Finally, in December, I brought her home. Because of her calm demeanor and attachment to me, she was fine without a companion while I searched for the right match. I have two small grandkids so I was trying to decide how that may factor into my decision.”

“It was shortly before Mother's Day and I just started thinking about Serena's mother, Gracefully Done. I did some research and found her in Paris, Kentucky at Brandywine Farm,” said Cyr. “I sent them an email saying I was just curious about how the mare was doing and I received a phone call from Pam Robinson.”

Gracefully Done (Deputy Commander) turned 19 in January. She ran six times for Flying Z Stable and never hit the board.

“Gracefully Done was in our retirement herd of 15 horses,” said Robinson. “After getting to know Wendy on the phone and seeing pictures of her horse, I offered to allow her to take the mare. I would not have let her go if I wasn't confident that Wendy was going to give her a forever home.” 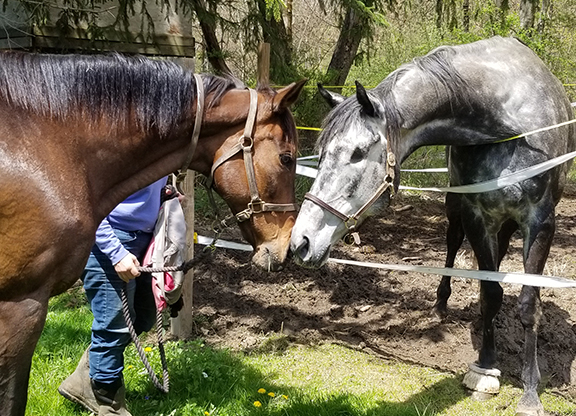 Cyr wasn't confident that she could get the mare all the way from Kentucky to Connecticut where racehorse shippers don't often go.

“Once again, it felt like this was meant to be so I contacted Valerie Buck for help,” said Cyr. “Valerie put the Thoroughbred aftercare network in motion.”

“I contacted Rick Schosberg to see if he had any advice on getting the mare to New York,” said Buck. “Then I was going to haul her to Connecticut. Rick made some calls and paid half of the shipping bill and Morrisey's delivered her right to Wendy at a reduced rate.”

Then came the test–how would they react to each other?

“It absolutely felt like they knew each other,” said Cyr. “They were instantly friendly and they share everything. It could not have worked out more beautifully in every way.”

“I am so thankful to the universe and everyone who has helped us. Serena gives me joy every day. She is so smart and I ride her everywhere. Grace is also in terrific shape so I will be working with her this summer as well.”

Everyone needs serenity and grace in their life. Wendy Cyr now has them in abundance with Cosmic Serenity and Gracefully Done.

Diana Pikulski is the editor of the Thoroughbred Adoption Network and a partner in the public affairs firm, Yepsen & Pikulski.