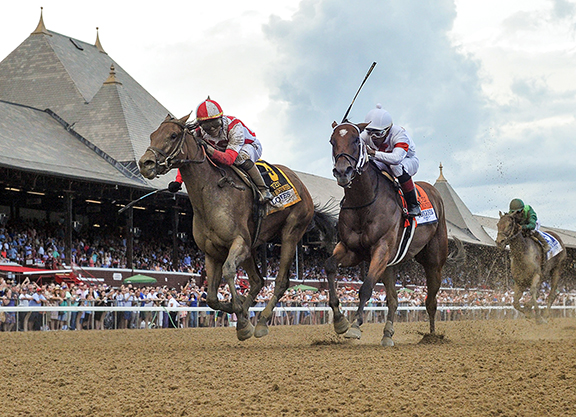 Patrons at Belmont will get a very early look at a multiple Grade I winner Saturday, as Klaravich Stables’ Separationofpowers (Candy Ride {Arg}) headlines the GIII Vagrancy S. in her 4-year-old debut, carded as the day’s first race.

A slam-dunk ‘TDN Rising Star’ when unveiled with an 11 3/4-length romp two summers ago at Saratoga, the $190,000 Keeneland November pickup annexed the GI Frizette S. two starts later at this oval. Fourth in the GI Breeders’ Cup Juvenile Fillies, the bay had an abbreviated 3-year-old campaign, but one that included a game conquest of the GI Longines Test S. back at the Spa. She was last seen retreating to finish fourth in the GI Cotillion S. Sept. 22 at Parx.

The distant two-three finishers behind streaking Come Dancing (Malibu Moon) in the GIII Distaff H. look to pose the biggest threats to the returning chalk. Tobey Morton’s Pacific Gale (Flat Out) earned a career-high 98 Beyer when second at 26-1 in the aforementioned Distaff, and Stonestreet Stables’ Dawn the Destroyer (Speightstown), beaten 14 lengths while third, looks to get back to the form that saw her capture the Interborough S. Jan. 25 at Aqueduct.