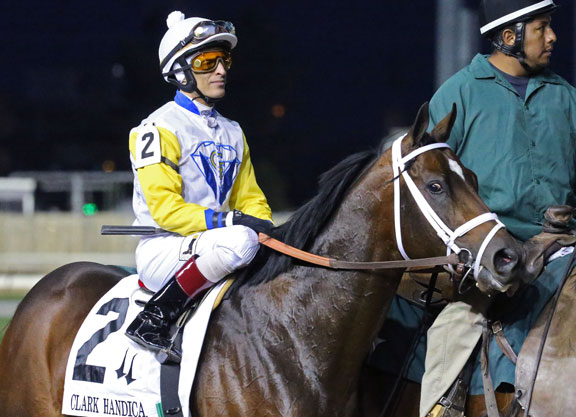 Charles Fipke's homebred Seeking the Soul (Perfect Soul {Ire}–Seeking the Title, by Seeking the Gold), winner of the 2017 GI Clark H., has been retired from racing after suffering a tendon injury last month. Although stud plans have not yet been announced, Fipke said he plans to support the 7-year-old stallion.

“He's at my farm in Paris, Kentucky, where he was born, and is recuperating nicely under the eye of farm manager Elke Krohn,” Fipke said Monday. “He's a lovely horse, a Grade l winner who was genuine on the track and earned $3.5 million, and he's got an incredible family that was developed by Ogden Phipps. I will support him with some of my best mares, you can be sure of that.”

“He just loved to run,” trainer Dallas Stewart said. “You can't teach a horse that. That's how the best of them are, they either have it or they don't. You put a saddle on him, and he wanted to go. He was a tough horse on the track, and he was unlucky a few times in his races, but he had a mind on him and never got discouraged no matter what. He was a real racehorse.”