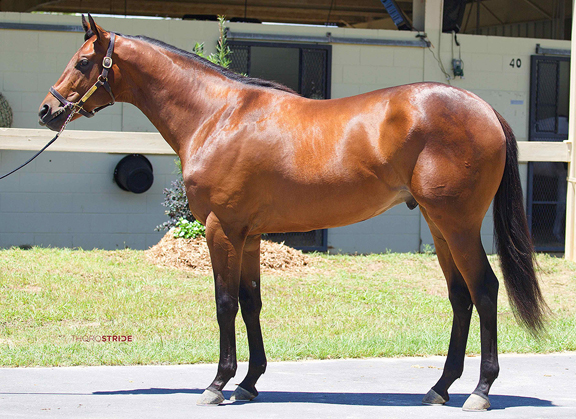 HAPPYMAC (Runhappy), an $800,000 RNA at the OBS June Sale (:20 3/5), looks like the one to beat in this extremely deep baby race at the Spa. The half-brother to runaway GII Amsterdam S. winner and GI Breeders' Cup Sprint runner-up Shancelot (Shanghai Bobby) fired a five-furlong bullet from the gate in :59 2/5 (1/12) at Saratoga Aug. 17. Happymac, drawn widest of all in post 10 for the Heiligbrodts and Hall of Famer Steve Asmussen, previously brought $125,000 at KEEJAN and $360,000 at KEESEP as a yearling. He is the 5-2 morning-line favorite.

The rail-drawn Newbomb (Speightstown), a half-brother to the talented GSW & MGISP My Happy Face (Tiz Wonderful), debuts for Todd Pletcher. The $155,000 FTKOCT yearling has a pair of bullet workouts on the tab for this.

VITTORIO (Ghostzapper), a $750,000 OBS Spring purchase (bullet :9 4/5) by Kaleem Shah, looks to build off a better-than-it-looked fifth-place finish after a slow start and wide trip on debut going five furlongs Aug. 1 (Second Chances). The bay fired a four-furlong bullet in :47 (1/113) for trainer Simon Callaghan from the gate Aug. 16. TJCIS PPs

Canadian Classic winner ONE BAD BOY (Twirling Candy), winner of last term's Queen's Plate S., makes his 4-year-old debut. The dark bay, trained by Richard Baltas, was last seen finishing third as the even-money favorite in the second leg of Canada's Triple Crown in the Prince of Wales S. at Fort Erie last July. He has been working bullets for his return, and graduated impressively in his lone prior try on grass at Santa Anita last April. TJCIS PPs