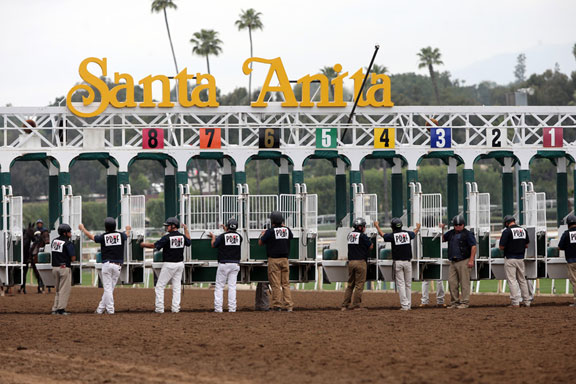 In a press release Monday, Santa Anita announced substantial purse increases due to “increased handle over the last year” for all overnight races at its upcoming winter meet, as compared to its recently-wrapped fall meet.

While purse increases will be seen across the board, the biggest cash injections–as much as 11%–will be aimed towards claiming races, “which are the bread and butter of the racing program,” said Elizabeth Morey, director of Racing and Northern California Operations for Thoroughbred Owners of California (TOC).

The threshold from running in first condition allowances has also been expanded from non-winners of $10,000 other than maiden, claiming or starter, to $15,000 “other than.”

Asked whether the changes concerning first-condition allowance races will impact field sizes in certain races at Golden Gate–the change is described as an “incentive” for Bay Area horsemen to ship south–Bill Patterson, Northern California manager of the California Thoroughbred Trainers, told TDN that it “could” have an impact.

“It's probably going to help the first condition down there,” he said, meaning Santa Anita. “But I don't think every trainer that wins a first-condition up here will automatically say, 'I'm headed south now.'”

“A lot of the time, when they change conditions, usually everybody goes into a panic, and then it turns out to be not as bad as you'd thought it would be,” Patterson added. “It could work both ways. You'll just have to run some races and see how it goes.”

Morey explained that the Bay Area facility has seen handle and purses increases this year, and as such, “We think this new policy makes Golden Gate a more attractive place to race with more opportunities for horses based there. We expect it will benefit both circuits.”

According to Santa Anita Racing Director Dan Eidson, the changes made to the purse distribution model in races run for $30,000 or less is designed to level the playing field between large and small stables.

“Either on the East Coast or the West Coast, as you know, there are those trainers that pretty much dominate the purse earnings,” Eidson said. “What this does is give the people with the smaller stables, and their owners, the chance to earn a few dollars [more]. It's quite significant. When you take 5% from the winner and spread it out to fourth and fifth, if you finish fourth a couple times, you might just pay your training bill for the month.”

The issue of so called “super trainers” is one getting increasing attention. For a long time, the 20/80 model–that the top 20% of trainers won 80% of the prize money–was believed to be the rule in California. According to stats calculated using Daily Racing Form data, the top 20% of trainers in California won nearly 84% of the available purses in 2016–a ratio that has remained fairly consistent between 2007 and 2016.

“If I had my way, I would go the whole nine yards. I would do what New York is doing,” Eidson said, meaning that he would expand the new distribution model to cover all, or nearly all, races at Santa Anita.

This summer, for example, the New York Racing Association announced that all purses at Saratoga–with the exception of certain stakes with awards already stated–would be distributed

“We had an agreement with the TOC,” Eidson added. “This is a starting point, and we'll see how it works, and if it does, it's something to look at in the future.”

Morey said that it's “a little premature to say” whether the distribution model will be expanded. “Everything that's being done for this meet has been a collaboration between the track and the TOC, and I think we're all looking to try new things to keep California very competitive,” she added.

As to the changes in first-condition allowances, expanding from non-winners of $10,000 other than maiden, claiming or starter, to $15,000 other than, Eidson said that it's an “incentive” to bring horses to California that have already run and won elsewhere.

“People are buying more and more horses from places like Europe and South America, and sometimes they win these allowance races back home worth $11,000 or $12,000 to the winner, and they come here, then find themselves running in 'two-other-thans' right off the bat,” he said. “You get a chance to see where your horse really belongs.”

Eidson is the interim racing secretary at Santa Anita while the Stronach Group hunts for a replacement to former racing secretary Rick Hammerle, fired from his position just last week. Asked about his hopes for success with the stated changes to the imminent winter meet, Eidson said that The Stronach Group is “always willing” to try something new. “And if it doesn't[work], we'll try something else.”