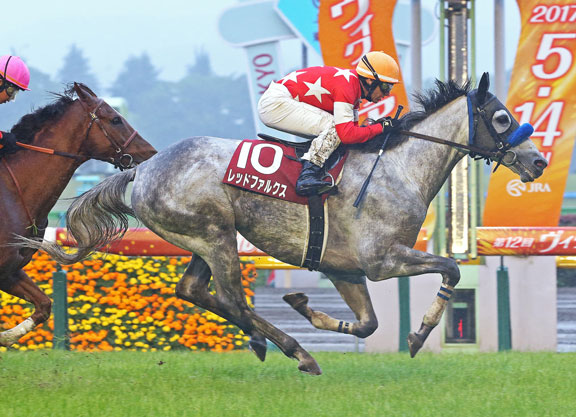 Red Falx earned himself an automatic berth into the GI Breeders' Cup Turf Sprint with a repeat score in Nakayama's G1 Sprinters S., part of the Global Sprint Challenge, on Sunday. The 5-year-old entire had bested Mikki Isle (Jpn) (Deep Impact {Jpn}) by a head when winning this last year, after which he faltered to beat just one home in Sha Tin's G1 Longines Hong Kong Sprint in December. Third in the G1 Takamatsunomiya Kinen on Mar. 26, Red Falx bounced back with a win upped to seven furlongs in the G2 Keio Hai Spring Cup on May 13, and was beaten just a half-length when third in the one mile G1 Yasuda Kinen on June 4. Making his autumn debut here while dropping back down in trip, Red Falx traveled midpack amongst rivals down the backstretch and came with a sustained rally down the middle of the track in the stretch to nip the 2015 G1 Oka Sho winner Let's Go Donki by a nose on the wire. Winning rider Mirco Demuro said, “I know this horse really well and seeing his movement in his gallop before this race, I was confident that we were

well equipped to win it a second time. Starting from stall eight was an icing on the cake–the draw last year was further out and we still won–and added to my confidence. The trainer and stable staff really conditioned him to his best and he was relaxed in the post parade and felt really good. His break was fine but he's a little slow in getting into the flow, so he was a little further behind between the first and second corner. But I felt a great amount of power under me throughout and I knew that if we entered the straight smoothly, we would definitely make it. Just as I'd hoped, he changed legs and gave his usual strong finish to the end.”