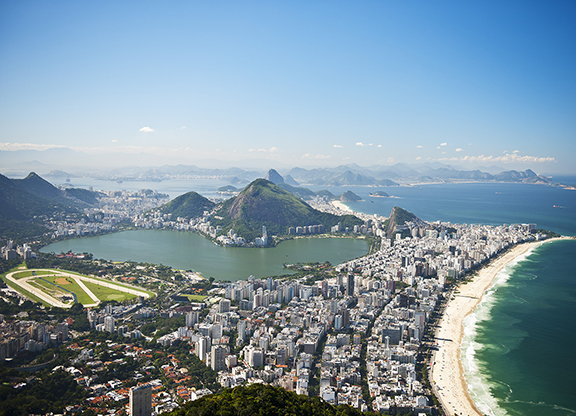 From the TDN Look

Take the man-made structures from most cities and what’s left is a meadow and, maybe, a pretty confluence of rivers. Take them from Rio de Janeiro, and you have one of the most picturesque places on Earth. Soaring granite peaks…verdant jungles…wide, pristine beaches and an eponymous ocean current that keeps the turquoise coastal waters warm year-round.

Now add to that landscape an ethnically diverse population of 7.5 million people who share a love of beach culture and good times, and you have one of the most dynamic and vibrant cities in the world.

Welcome to Rio, the misunderstood but brilliant jewel of Latin America. Home of the 2016 Olympics and the 2014 World Cup Final. Eternal home of the caipirinha, Brazil’s national drink. And, as it turns out, an excellent place to catch a horse race.

Last July, I travelled to Rio with my wife Ada, who was teaching poetry, and spent two weeks exploring the sprawling city. Naturally I spent plenty of time at Hipódromo da Gávea, Brazil’s main race course. Gávea is in one of Rio’s most affluent neighborhoods and is adjacent to the upscale communities of Leblon and Ipanema, making it an ideal place for those looking to mix traditional tourism and race going.

Any story about Rio de Janeiro begins with its geology and ecology. As much as any city in the world, Rio is defined by the land it sits on. Located in Southeastern Brazil, Rio feels as if it were cut from the jungle…and is actively being reclaimed by it. The rainforest that surrounds the city-Tijuca-is one of the largest urban forests in the world, and the beautiful city sidewalks here, patterned in black-and-white mosaics, are often dark and crowded with ficus and cannonball trees.

Rio itself is a city misnamed. According to popular lore, when the Portuguese first arrived on New Year’s Day, 1502, they assumed that Guanabara Bay was the mouth of a river, hence the name Rio de Janeiro, or January River.

Sitting over this bay is one of Rio’s great attractions, Sugarloaf Mountain. A granite and quartz monolith that rises nearly 1,300 feet straight up, Sugarloaf is accessible by tram and offers amazing panoramics of Rio. The first trams began running at Sugarloaf in 1912, some tin-can contraptions that must have put the fear of God in riders on a blustery day.

There is no bad time to visit Sugarloaf, but sunset ensures a near transcendental experience. As a stiff warm breeze kicks up off the ocean, you can watch the sun go down behind the western edge of Rio, backlighting the famous Christ the Redeemer statue and the rugged mountain terrain. Have time to kill? Order a beer and watch planes cross over the mountains and head straight toward Sugarloaf, only to descend rapidly and bank hard to the left, carving out a 45 degree turn and straightening in time to land at the domestic airport at water’s edge, Santos Dumont.

To read the rest of Lucas Marquardt’s Rio travelogue in the TDN Look, or to watch the video, click here.