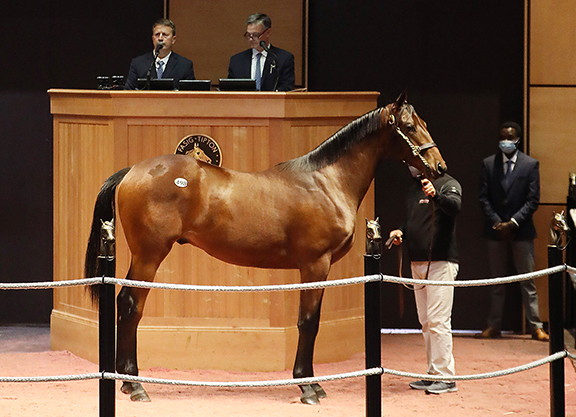 LEXINGTON, KY – While Into Mischief secured the top lots during Monday's first session of the Fasig-Tipton Kentucky October Yearlings Sale, it was Quality Road in charge during Tuesday's second session as Eclipse Thoroughbred Partners went to a session-topping $560,000 to secure a son of the Lane's End stallion. The day kicked off with a daughter of Quality Road bringing what was ultimately the session's co-second-highest price of $230,000.

“There was solid trade again today,” Fasig-Tipton President Boyd Browning said Tuesday evening. “There was a very respectable RNA rate, the average was down slightly from last year at this point. All in all, I think there has been a legitimate marketplace that has been fair for both buyers and sellers.”

The buy-back rate continued to trend down from 2019, with the two-day figure resting at 21.4% following Tuesday's action.

“The credit for [the buy-back rate] goes to the sellers for being pretty realistic in their expectations,” Browning said. “Both the owners and the consignors/agents who have educated their principals as to the realities of the marketplace. So the buy-back rate has certainly been at an acceptable level and there are horses who continue to get sold post-sale that aren't reflected in that figure.”

The auction continued the familiar refrain of market polarization, with the perceived quality lots attracting plenty of attention and horses below that mark struggling.

“It's been soft, but when the right one shows up, the money shows up,” trainer Bruce Levine summed up the market at Fasig-Tipton this week. Levine purchased a colt by Pioneeof the Nile for the session's co-second highest price of $230,000.

Internet bidding has produced 43 sales during the first two days of the sale, with 27 yearlings selling online Tuesday added to 16 Monday.

“Some of those folks would have contacted somebody, used an agent, would have phone bid, or figured out another way to bid, but clearly certain people are comfortable in participating via the internet,” Browning said. “It's another way to provide bidding opportunities and options for those who want to participate in that fashion.”

The October sale continues through Thursday with sessions beginning daily at 10 a.m.

Eclipse Hoping for Another 'Great' Colt
Eclipse Thoroughbred Partners will be heading to the Breeders' Cup in a couple weeks with Grade I-winning juvenile Gretzky the Great and the operation added a Quality Road half-brother to that colt to its roster when bloodstock agent Jacob West signed the ticket on hip 498 at $560,000. The yearling was bred and consigned by Dave Anderson's Anderson Farms.

“It makes sense,” West, bidding outside behind the pavilion, said of the purchase. “Eclipse has the brother, and this colt was the star of the show here in our opinion. He is by a proven sire in Quality Road that Eclipse has had a lot of success with and he's a half to a horse we know a lot about, obviously, and have had success with. He's from a good breeder in Dave Anderson and his operation.”

West expects the June 4 colt will only continue to improve.

“Being a June foal, Dave did right by him, backing him up into this sale and giving him as much time as he could to let him grow up and into himself. But I still think the horse has a lot more maturing to do and he's going to look like a completely different horse even 60 days from now.”

Of the yearling's final price, West said, “We knew we weren't going to walk in here and steal him. He was a pretty obvious horse for everybody.”

The SF Bloodstock and Starlight spearheaded partnership which has been so active buying well-bred yearling colts this fall, was underbidder on the youngster while doing their bidding upstairs in the pavilion.

Gretzky the Great RNA'd for $295,000 at last year's October sale. Campaigned by Eclipse and Gary Barber and trained by Mark Casse, the colt broke his maiden at Woodbine in August and added the Soaring Free S. just weeks later. He booked his ticket to the GI Breeders' Cup Juvenile Turf with a 3 1/4-length victory in the Sept. 20 GI Summer S., which was run as the Keeneland September sale was already halfway done.

“We pointed this horse to this sale because he was a June foal and we just wanted to give him some more time,” Anderson said. “We were hoping that his brother would continue to do well and the stars were aligned.”

Anderson, who sold a Medaglia d'Oro filly (hip 319) for $1.6 million at last month's Keeneland September sale, purchased Pearl Turn (Bernardini) for $310,000 at the 2016 Keeneland November sale. Now 10, the mare was multiple stakes placed while earning $182,560 on the racetrack.

“At the time, I didn't realize that Bernardini was going to go on and be as good a broodmare as he is,” Anderson said of his 2016 purchase. “That was just a plus. But she comes from an old Calumet family that my dad had a couple of mares out of and that family meant a lot to me. The mare could really run, though it didn't show it on paper, but she had a lot of ability. Any time you can find a mare bred like her that had a lot of ability, you've got to take advantage of it.”

Anderson added Pearl Turn is currently in foal to Nyquist's sire Uncle Mo and due early.

Quality Road Filly Kickstarts Tuesday
A filly by Quality Road (hip 389), the first horse through the ring Tuesday morning, got the second session of the October sale off to a quick start when selling for $230,000 to the bid of pinhooker Ciaran Dunne. The yearling is out of the stakes-placed Moonlight Sky (Sky Mesa), a half-sister to champion Abel Tasman (Quality Road). She was bred by China Horse Club International and consigned Tuesday by Claiborne Farm.

“It's obvious,” Dunne said of the yearling's appeal. “She's a Quality Road filly and we have had a lot of success with Quality Road through the years. For me, he is the best sire in the country. It's a wonderful family. She needs to mature, but she's a late foal, so hopefully she will.”

Dunne did his bidding on the yearling from the back row of the sales pavilion, ultimately seeing off a group led by Becky Thomas and Al Pike sitting just a few rows in front of him.

China Horse Club, which co-owned 2017 GI Kentucky Oaks winner and champion 3-year-old filly Abel Tasman, purchased Moonlight Sky for $675,000 at that year's Fasig-Tipton November sale. The yearling, a May 22 filly, is the mare's first foal. She was not bred last year, but was bred back to Curlin this past spring.

“That was a great result,” Claiborne's Jill Gordon said. “The filly has always been very straightforward at the farm and she was the same up here. She is a beautiful mover and she's got a lot of class.”

Abel Tasman, who sold for $5 million to Coolmore's M.V. Magnier at the 2019 Keeneland January sale, produced a colt by Galileo (Ire) this year.

Bruce Levine vetted just one horse at Newtown Paddocks this week, a colt by Pioneerof the Nile, and that yearling (hip 680) will join the trainer's New York-based string after selling for $230,000 Tuesday at Fasig-Tipton.

“I just thought he was a neat-looking colt,” Levine said after signing the ticket on behalf of an undisclosed client. “He's out of a graded stakes-winning mare. And the sire–how are you going to knock him?”

The bay colt is out of Savvy Supreme (Distorted Humor), who is a full-sister to Grade I winner Commentator. Co-bred by WinStar Farm and Joe Minor's JSM Equine, the yearling was consigned by Taylor Made Sales Agency.

Of the colt's final price Tuesday, Levine said, “I think it was just me and one other person and we kept going from $75,000 or $80,000, he just kept chasing me. I would have gone a little higher, but not much higher. I was at Keeneland, we bought a couple, and I wanted to get one or two more. But this was a horse I liked and he was actually the only one I vetted. We'll keep our fingers crossed.”

Not This Time Colt Helps Lange Weather Storm
Lee Lange and Don Credeur were on the road home to Louisiana Tuesday as Hurricane Zeta bore down on the state, but before they left Lexington the two men watched their colt by Not This Time sell for $170,000 to Team Casse. Lange and Credeur purchased Pop Singer (Scat Daddy), with this colt in utero, for $14,000 at the Fasig-Tipton February sale in 2019.

“She was such a beautiful mare herself and she was by Scat Daddy, so those were the two things that appealed to me and my partner, Don Credeur,” Lange said Tuesday. “I thought we stole her at that price.”

Credeur added with a laugh, “We just met the guy we bought her from and naturally he wants her back.”

Since Lange and Credeur purchased the 7-year-old mare, who was carrying her first foal, Not This Time's popularity has only grown, helped by the Grade I victory of OBS Spring topper Princess Noor.

“Every time we got a tidbit of news, it was even better,” Lange said of the first-year sire's exploits.

Lange said they were expecting the yearling would sell in the range of $125,000, so he exceeded expectations, but was making up for what has been a tough year to sell yearlings.

“I sold a couple of 2-year-olds, but up until this point I think we had bought all of our yearlings back,” Lange said.

Credeur said, “We brought five to the Opelousas sale and had to buy them all back.”

Lange, who owns Sunset Stables in Louisiana and is president of the oil pipe company Aztec Pipe, Inc., has about 10 mares, some of which are in partnership with Credeur.

“We only race what we can't sell,” Lange said.

Of Pop Singer, Lange added, “We still have the mare. She didn't get in foal last year, but she is back in foal this year to Midshipman.”