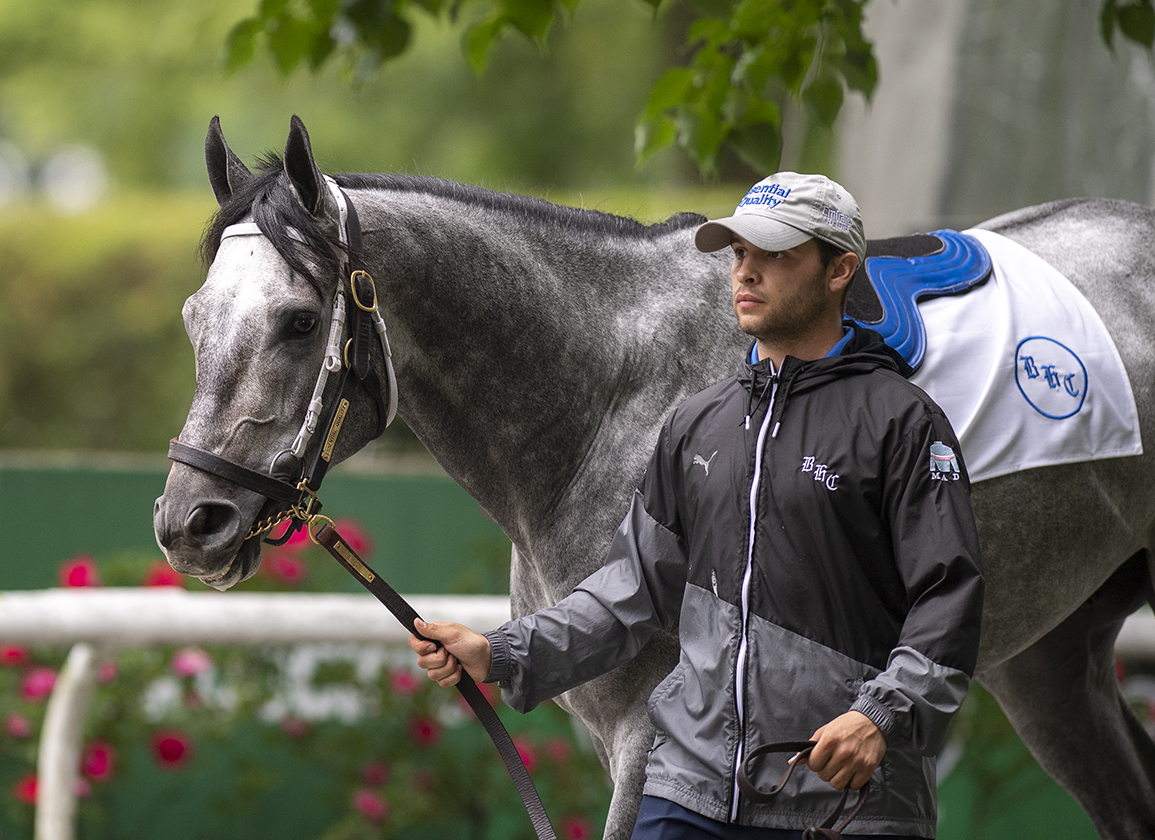 ELMONT, NY — What a difference a year makes.

Back in its traditional spot on the calendar and 1 1/2-mile distance after the COVID-19 pandemic turned the world-and Triple Crown-completely upside down in 2020, Saturday's GI Belmont S. will feature a showdown between last year's champion 2-year-old colt Essential Quality (Tapit) and GI Preakness S. upsetter Rombauer (Twirling Candy).

The Godolphin homebred was unstoppable in his first five career starts, headed by a win in the 2020 GI Breeders' Cup Juvenile. Sent off as the 5-2 favorite in the GI Kentucky Derby, he covered all the ground that day and reported home a respectable fourth, beaten just a length.

How will he handle the added distance of the Belmont? His leading sire Tapit is shooting for a record fourth success, and if his training is any indication, the longer the better, per trainer Brad Cox.

“I remember the first time we breezed him,” Cox said in a recent feature in TDN. “I looked at my assistant and said, 'Wow, this horse acts like he can win the Belmont.' He just never stopped.”

Cox added of the Belmont 2-1 morning-line favorite, “He ran what I thought was a winning race in the Derby; he didn't have the trip, but he showed up and he's been improving in every start.”

Cox also saddled the Derby second-place finisher Mandaloun (Into Mischief), who could be elevated to first after a split sample confirmed the prohibited corticosteroid betamethasone in the race's winner Medina Spirit (Protonico) earlier this week.

Hot Rod Charlie (Oxbow) sat just behind the leaders in the Derby, and, after making his way through some traffic, outfinished Essential Quality by a head to place third. Hot Rod Charlie's resume also includes a 94-1 second-place finish in the Breeders' Cup Juvenile and a front-running victory in the GII Louisiana Derby Mar. 20.

The half-brother to champion sprinter Mitole (Eskendereya) retains the services of Flavien Prat, who also guided home Rombauer to an 11-1 upset in the second leg of the Triple Crown.

“With the distance, I think it will suit him well,” trainer Doug O'Neill said. “He's won going 1 3/16 in the Louisiana Derby. I think his gate speed and versatility will be an asset as well. I'm super excited having Flavien back on him.”

The versatile Rombauer, also a winner of the El Camino Real Derby over the Golden Gate synthetic Feb. 13, finished behind Essential Quality in each of their two previous meetings, reporting home fifth in the Juvenile and third in the GII Blue Grass S. Excluding recent Triple Crown winners American Pharoah and Justify, Rombauer seeks to become the first sophomore to complete the Preakness/Belmont double since Afleet Alex did so in 2005.

The John and Diane Fradkin homebred will be piloted for the first time by Hall of Famer John Velazquez, his seventh different rider in eight-career starts.

“He's had several different riders and it's not something that's bothered me,” trainer Michael McCarthy said. “It would have been nice to have Flavien back, but I feel we have a wonderful substitute.”

The former assistant to Todd Pletcher added, “I have a lot of good memories here. To win any Triple Crown race is fantastic, the Belmont is really the 'Test of the Champion' and it would certainly be nice to hoist a trophy like that on Saturday.”

Pletcher will have three chances to capture his fourth win in the Belmont, led by GI Curlin Florida Derby winner and Kentucky Derby ninth Known Agenda (Curlin). Irad Ortiz, Jr., booked to ride the St Elias Stable homebred, went down in a spill on Friday's card and will be sidelined for two weeks. A replacement rider for Known Agenda has yet to be named.

Pletcher will also saddle longshots Bourbonic (Bernardini) and Overtook (Curlin). The former followed a narrow upset in the GII Wood Memorial S. with a 13th-place finish in the Derby. Overtook, a $1-million KEESEP yearling, enters off a third-place finish in the local prep GIII Peter Pan S.

Never a factor after getting wiped out at the start in the Derby, GI Runhappy Santa Anita Derby winner Rock Your World (Candy Ride {Arg}) looks to atone for his 17th-place finish as the 9-2 second choice. The Hronis Racing and Michael Talla colorbearer appears to be the controlling speed, with a better break this time, of course.

“We always thought the longer the better for him,” trainer John Sadler said. “He's come back and done real well since the Derby. We think he can run a long way. He's got Candy Ride on top and with him being out of an Empire Maker mare, he's got the stamina to go the distance.”

Japan's France Go de Ina (Will Take Charge), sixth after a slow start in the G2 UAE Derby Mar. 27 and seventh in the Preakness, rounds out the field of eight. A $1-million bonus–offered to the connections of any Japan-based horse who wins the Belmont– will be on the line.

A year after being conducted spectator-free, around one turn at 1 1/8 miles and as the first race of the Triple Crown on the third Saturday in June, sunny skies and temperatures in the mid 80s will greet a capped crowd of approximately 11,000 for Saturday's loaded 13-race program.

The card features eight Grade I contests, including the prestigious GI Hill 'n' Dale Metropolitan H. Post time for the Belmont is 6:49 p.m. ET. NBC will have live coverage beginning at 5 p.m.