Pyledriver Bounces Back To Dominate the Voltigeur 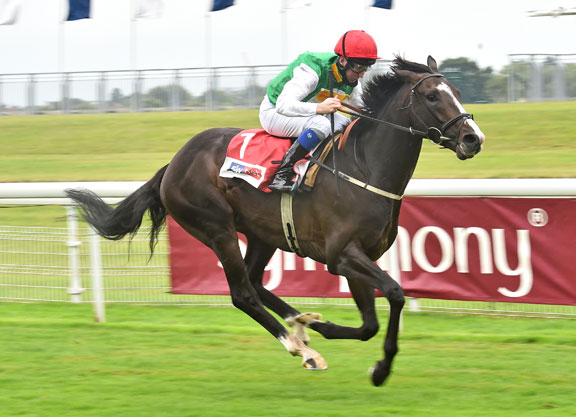 Only 11th in the July 4 G1 Epsom Derby, Pyledriver (GB) (Harbour Watch {Ire}) relished being back on kinder terrain on Wednesday as he turned the G2 Sky Bet Great Voltigeur S. into a procession at York. Saddled with a three-pound penalty due to his clear-cut win in the G2 King Edward VII S. over this trip at Royal Ascot June 16, the 10-1 shot had one behind early but when moved forward by Martin Dwyer was able to take command with ease passing the two-furlong pole. Stretching clear despite still looking green, the bay had 3 1/2 lengths to spare over Highland Chief (Ire) (Gleneagles {Ire}) at the line, with the 85-40 favourite Mogul (GB) (Galileo {Ire}) half a length away in third.

Consistently underestimated throughout his brief career, Pyledriver first came to the fore when winning the Listed Ascendant S. over a mile on soft ground at Haydock in September. Taken into winter quarters following his disappointing effort when last of seven in the G2 Royal Lodge S. at Newmarket later that month, he returned in rude health when second to Berlin Tango (GB) (Dansili {GB}) in the re-routed G3 Classic Trial over a mile and a quarter on Kempton's Polytrack June 3. One of the leading players for the Derby following his impressive win in King Edward VII, he emerged one of the unlucky ones having got no luck in the blue riband but always looked happy in this entirely different test.

Trainer William Muir could have his sights set on the G1 St Leger at Doncaster, but may yet have his head turned where a certain ParisLongchamp feature is concerned. “We are in the [G1] Grand Prix de Paris. The Leger has been on the cards, but people are saying we should now go for the Arc,” he said. “He didn't look like he was stopping today, but then Martin said today he's got loads of gears and horses with gears normally don't just stay and stay. It's a lovely problem to have–this is where we want to be.”

“It was a good race today and I can understand why Mogul was such a short price and we were such a big price, but if we'd had a clear run in the Derby we'd have finished in front of him,” he added. “Our race was gone after three furlongs. He's a big, unfurnished horse, but he's getting there. He's so easy to do anything with and he thinks life's great.”

Oliver Cole said of Highland Chief, “I think the ground was okay for him, we were hoping for softer ground which is what he won on at Ascot. It's a difficult race to read, he's beaten Mogul. I think he's got a better turn of foot than he showed there, but he didn't quicken as well as I expected him to. We could think about the St Leger, but it could depend if the winner goes there! Maybe, we'll have to have a think, but he's run his heart out.”

Pyledriver is the first foal out of a full-sister to the G3 Park Express S. winner Normandel (Fr) and a half to Mont Ormel (Fr) (Air Chief Marshal {Ire}), who caused an upset in the 2016 Grand Prix de Paris. Another half-sibling Lillebonne (Fr) (Danehill Dancer {Ire}) produced the smart Micro Manage (Ire) (Rip Van Winkle {Ire}), who was third in last week's G3 Irish St Leger Trial. The third dam is Lidakiya (Ire) (Kahyasi {Ire}), who was responsible for Linngari (Ire) (Indian Ridge {Ire}) who captured the G1 Premio Vittorio di Capua and G1 Grosser Dallmayr-Preis. The dam's 2-year-old filly Country Pyle (GB) is by New Approach (Ire), while she also has a yearling colt by Oasis Dream (GB) and a foal daughter of Frankel (GB).