Pinatubo: It’s A Yes From Smullen 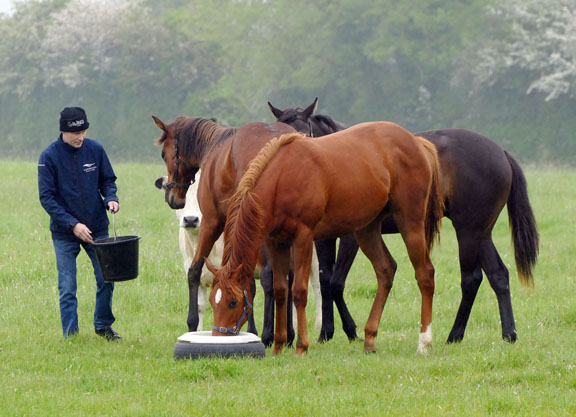 Ahead of the return of racing in Britain and Ireland, former Irish champion jockey and TDN columnist Pat Smullen has shared his thoughts with us on an action-packed June and beyond, which you can read here or listen to via the audio link in this story.

One of the most anticipated returns to the racecourse in Europe this season will be that of Pinatubo (Ire) (Shamardal), whose unbeaten campaign in 2019 saw him crowned European champion 2-year-old with a rating of 128, the highest awarded to a juvenile in 25 years.

As ever, with a horse of such calibre who also showed great precocity, debate has continued through the winter and spring as to whether Pinatubo can continue his dominance through his 3-year-old season and, for Smullen, he’s still the one to beat.

“I’m very much a ‘yes’ man,” he says of the Charlie Appleby-trained colt. “My opinion hasn’t changed just because we’re not going to see him for a delayed period of maybe six weeks [from the original date of the 2000 Guineas]. He was of the highest quality with an extremely high rating from last year and he was hugely impressive in all his starts. It’s good to read that he has been away from home and had a couple of racecourse gallops, including at Chelmsford, so he’s going to be ready for when the Guineas is run and he is still the one that everybody has to beat. There are great reports of Arizona (Ire), and he’s working extremely well from what I gather, but Pinatubo has the most solid form in the book.”

Since his retirement from race-riding in May 2019, Smullen has been employed as a racing advisor by Eva-Maria Bucher Haefner of Moyglare Stud and he also has his eye on a 3-year-old sister to last year’s Irish St Leger winner Search For A Song (Ire) (Galileo {Ire}) and three-parts sister to G1 St James’s Palace S. winner Free Eagle (Ire) (High Chaparral {Ire}) who has entries in the Irish 1000 Guineas and Irish Oaks.

He says, “On a personal level there’s a filly of Moyglare’s trained by Dermot Weld called Amma Grace (Ire). She’s got an extremely good pedigree—a Galileo filly—and was impressive in her maiden win at Leopardstown on the back end of last year. We’d be hopeful that she will return at a decent level.  So I’m looking forward to her, and Arizona is another that I’m really looking forward to seeing.”

The delayed start to the season has caused consternation for owners and trainers alike, making it, for a few months at least, an even more delicate balancing act than usual in preparing potential Classic horses for a seasonal resumption on an unknown date. In recent weeks, the Guineas at Newmarket have been confirmed for June 6 and 7—providing racing in Britain does indeed resume on Monday, June 1. The first Irish Classics will be run at the Curragh almost a week later on June 12 and 13.

Smullen’s own Classic record from more than two decades as stable jockey to Dermot Weld extends to 11 victories in Ireland and Britain, and most recently he achieved a long-held dream by winning the Derby on Harzand (Ire) (Sea The Stars {Ire}) in 2016. So he will be all too familiar with the work which goes into ensuring that these young colts and fillies peak just at the right time for their big-race assignments.

“We can do a certain amount of homework to prepare the horses but there is no substitute for a run,” he notes. “I know it has become more and more common to go to the Guineas without a prep race. Trainers can do that and get horses ready for their first run but in general people like to see how they get on with their first run and progress from there. It’s just a totally different year and it is going to be that way until the end of the season now. It’s something we’ve never experienced before. Everyone is in the same boat and they are just going to have to get their horses as fit as they possibly can at home and then just get them out and get running.”

He continues, “There’s probably going to be an advantage to some trainers who are a little bit harder on the horses at home and will have them fitter than others, but I’m sure the other trainers that are happy to have their horses prepared to whatever percentage, maybe 80% fit for their first run, will get rewarded as the year goes on and the horses progress.

“With the Guineas running at a later date in June rather than in May, that [extra] month or six weeks will be beneficial to some more than others. The more precocious 3-year olds which would have been up and ready from quite an active 2 year-old career would have an advantage in early May and now the pendulum is going to start to swing in favour of the later-maturing horse, but that is just the situation that we’re in.”

Unsurprisingly, Smullen reports that his former weighing-room colleagues are eager to return.

“From the jockeys’ perspective, having spoken to a lot of my friends and past colleagues, they are just desperate to get back racing,” he says. “It’s going to be totally different to how it’s ever been before. We were lucky in Ireland to have had a little bit of a test with the 10 race days behind closed doors [in March]. So that structure and the protocols are already in place. They are pretty much ready to go again in Ireland but obviously racing behind closed doors with no atmosphere and no one in attendance is quite different, as the lads were telling me. That’s as you’d expect but at this point everybody is just desperate to get back in whatever form it is in.”

Smullen continues, “We’re lucky that there is a good expanse, a lot of room on the racecourses and they can spread the jockeys out so they are not sitting on top of one another. There’s ample space for social distancing and for the jockeys to prepare for their rides without coming too close to each other.”

He also feels that racing owes a debt of gratitude to the owners who have kept horses in training during the uncertainties of the coronavirus pandemic. Smullen says, “Regardless of whether it’s a Pattern performer or low-grade handicapper—that’s irrelevant—owners have been paying bills and have been extremely understanding and patient over the last 2 1/2 months when there didn’t seem to be any idea when we would return. But they have continued to pay training fees and kept lots of trainers’ businesses going, and in turn that has kept people in jobs. The owners have been the vital cog, as they always are in racing, especially in this difficult time that we had they really kept the whole thing going.”

Smullen has spent lockdown at his home in Ireland with his wife Frances Crowley and their three children, and they have had plenty to keep them busy with the arrival of two foals to boost the equine numbers on their farm.

“We took the decision to buy a few foals to pinhook last year so we have two yearlings that we bought and two that we bred,” explains Smullen who last year, while undergoing treatment for pancreatic cancer, launched a charitable campaign which raised more than €2.5 million for Cancer Trials Ireland.

“The timing hasn’t been brilliant as we have four yearlings to sell and I think it’s going to be very difficult to sell horses this year. We also have two broodmares with two foals at foot. I’ve found it very beneficial to have the farm and the horses and it has kept us occupied through this difficult period.”

In Smullen’s weekly column for TDN Europe last season he spoke of his desire to see the racing and breeding communities help to make the sport more accessible through an increase of social media exposure. The enforced COVID-19 lockdown, though far from ideal in many regards, has brought with it a rise of racing-related content in the absence of any on-course action.

“It’s been everything that I had hoped for when we spoke about this before,” he says. “What Jamie Osborne has been doing is nothing short of extraordinary. It’s hugely entertaining and it really shows the camaraderie in yards between the staff in a very difficult period. I think it’s been amazing and it shows the enjoyment that can be had working in a racing stable. It has also highlighted how well both the staff and the horses are cared for. I think Jamie should be seriously commended for it and I’m sure he’ll be repaid with some new owners in the future, because if I was wanting to put a horse in training for a new owner entering the sport and you’d watched that, you’d be putting Jamie Osborne to the top of your list.”

He continues, “Another account that has been really informative has been Thoroughbred Tales with various different people taking up the account each week and showing all the different aspects of breeding and racing. That has also been very positive in my opinion. Johnny Hassett has been doing an excellent job and with the extra time that people have had on their hands through not going racing they’ve used it to the full advantage and sold the sport in a very positive way, which can only be beneficial to everybody.”