'Pharoah' Doubles Up in February S. 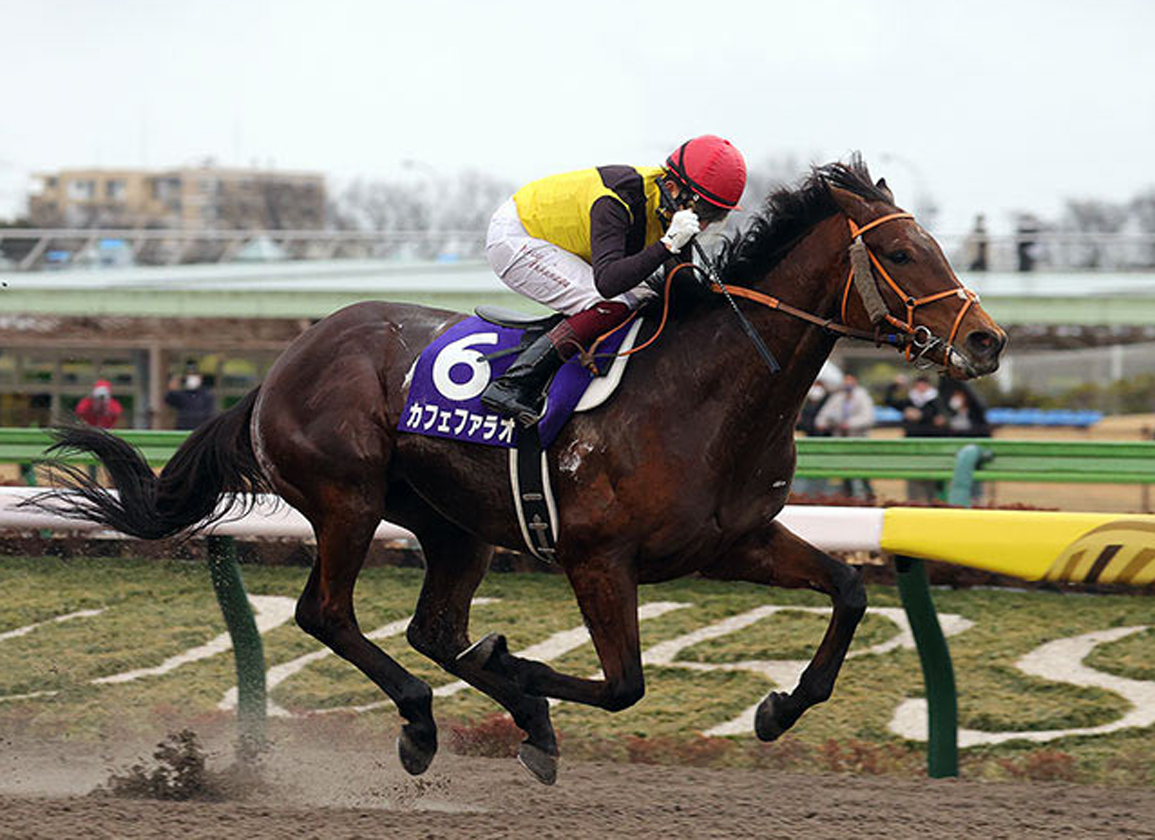 Café Pharoah (American Pharoah) returned to the winner's circle for the first time since landing the 2021 G1 February S. in the 2022 version, and became the second horse to win two editions after Copany Rickey (Jpn) (Gold Allure {Jpn}) in 2014/15. A “Win And You're In” for the GI Breeders' Cup Classic in November, the 1600-metre race saw the Noryuki Hori-trained runner draw off by 2 ½ lengths from T M South Dan (Jpn) (South Vigorous), with the popular white filly Sodashi (Jpn) (Kurofune) ran third, another half-length back.

In touch with the first flight as Sunrise Hope (Jpn) (Majestic Warrior) cleared the field, the 4-1 shot perched in between horses in fifth. The bay edged closer to the vanguard once Yuichi Fukunaga relaxed his hold as T M South Dan took over pacesetting duties from Sunrise Hope and hit the half-mile pole in :46.80. Sunrise Hope began a gradual retreat and Sodashi had dead aim on T M South Dan. Surging three deep, Café Pharoah began to let down strongly as Sodashi tired at the quarter pole, and took over the lead from T M South Dan with 200 metres to travel. He maintained the advantage all the way to the line, covering the 1600 metres in a snappy 1:33.80 in the mud, tying the track record.

“Mr. Hori and I went over the tactics before the race and everything went as planned,” said pilot Yuichi Fukunaga, who was returning from an injury sustained during the Longines Hong Kong International Races. “Cafe Pharoah's start wasn't that sharp but he recovered well and we were able to sit in a good position, in third, where he didn't have to bear too much sand in his face, which was what I was hoping for. After that I just tried to keep him focused especially after taking over the lead in the final stages. I'm grateful to the connections who offered me this ride even before I had fully recovered from the fall in Hong Kong and am happy that I was able to do a good job.”

Knocked down for $475,000 to Narvick International, agent, after breezing a quarter in :21.1 at the OBS March Sale in 2019, the 5-year-old entire won his first three starts at two and three, with stakes victories in the Listed Hyacinth S. and G3 Unicorn S. Later that year, he added the G3 Sirius S. and, after a sixth-place run in the G1 Champions Cup in December fo 2020, put it all together in the 2021 February S. The Paul Pompa, Jr.-bred bay was off the board in his next three starts, among them the Champions Cup at Chukyo on Dec. 5 when last seen.

Pedigree Notes
One of three Grade/Group 1 winners for his American Triple Crown-winning sire, Café Pharoah is also the first of the trio to win twice at the highest level. Of the Coolmore Ashford resident's 24 stakes winners, 13 have been grade/group winners.

Since his February S. win last year, Café Pharoah's year-older half-sister Regal Glory (Animal Kingdom) became a Grade I winner herself with an 2 1/2-length win in the GI Matriarch S. at Del Mar in the colours of Peter Brant's White Birch Farm. Also a winner of four other graded stakes including Saratoga's GII Lake Placid S. over her career, she had sold for $975,000 out of the Paul Pompa, Jr. Dispersal at Keeneland January in 2021, while their dam, Mary's Follies had been knocked down to BBA Ireland on a bid of $500,000 at the same sale. The first foal out of the dam was the GIII Dania Beach S. and GIII Transylvania S. hero Night Prowler (Giant's Causeway). Mary's Follies's 4-year-old colt by Uncle Mo died, while she also has a 3-year-old colt by Candy Ride (Arg) and a juvenile colt by Connect. She aborted after being bred to Curlin in 2020, and re-visited Coolmore Ashford's American Pharoah last spring.