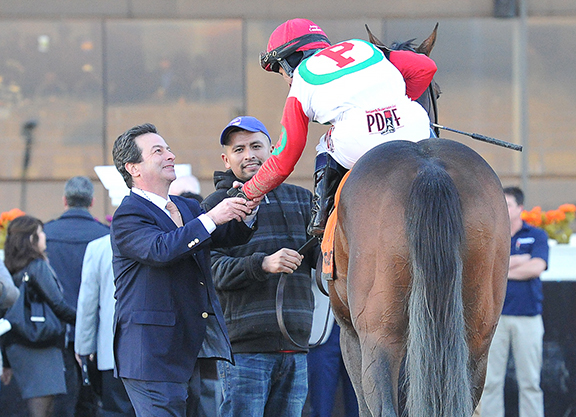 The late longtime owner and breeder Paul Pompa, Jr., was a prominent figure in horse racing over the past two decades. The former owner of Truck Rite Corp. campaigned the likes of dual Classic winner Big Brown (Boundary) and champion Stardom Bound (Tapit) in partnership and was the sole owner of Grade I winners Connect (Curlin) and Backseat Rhythm (El Corredor). Several Pompa homebreds carried his silks to graded victories, such as Night Prowler (Giant's Causeway), Regal Glory (Animal Kingdom) and Turned Aside (American Pharoah).

The latter two are among a group of 39 Pompa-owned horses to be offered in a complete dispersal at the upcoming Keeneland January sale due to Pompa's unexpected passing Oct. 10.

“Paul's family was really not involved in horses,” said Jerry McClenin, Pompa's cousin-in-law and stable manager. “They'd come to the track to see a race here and there. Paul had instructed me, that if anything were to happen to him, to disperse all of the horses. He had cancer a few years ago and he told me this back then. He placed it in his will also.”

Lane's End is handling the dispersal, which includes 17 racing/breeding prospects, 12 broodmares and 10 short yearlings, most of whom are by Pompa's GI Cigar Mile hero Connect.

“Honestly, this is the kind of situation you hate to be in as a farm and as a consignor,” Lane's End's Director of Sales Allaire Ryan said. “It goes without saying that we are doing this with heavy hearts. Mr. Pompa was such a hands-on owner. Anything I did for him, I always worked directly with him from start to finish. He was so passionate about horses and racing as a fan, caretaker and investor. Those are the types of people this industry needs.”

Ryan continued, “This dispersal is a sad thing to go through, but at the same time we are very proud of it. For Mr. Pompa to entrust Lane's End with his breeding stock and his stallion Connect was huge. It was a big honor for us. He was a client you quickly grew to love and admire. We hope it goes well and is something he would be proud of.”

One of the most attractive offerings in the sale is Pompa's homebred MGSW Regal Glory (Hip 403). Out of fellow MGSW Mary's Follies (More Than Ready), the 5-year-old mare currently boasts a record of 11-6-3-0 with earnings of $773,884. Trained by Chad Brown, the chestnut captured the Penn Oaks, GIII Lake George S. and GII Lake Placid S. in 2019 and placed in two additional graded events. Kicking off 2020 with a second to her MGISW stablemate Newspaperofrecord (Ire) (Lope de Vega {Ire}) in Belmont's GIII Intercontinental S. June 6, Regal Glory was fourth to that foe again in that venue's GI Just a Game S. 21 days later and closed out the year with a win in the GIII Kentucky Downs Ladies Turf S. Sept. 12.

“She is a lovely mare,” said Ryan. “Mr. Pompa was such a good caretaker of his horses. He always did right by the horses. This mare was so well managed between Mr. Pompa and Chad Brown. On top of her race record, she is a beautiful physical. She is going to have a lot of appeal to buyers.”

Her dam Mary's Follies (Hip 725) and her now-yearling half-brother by Connect (Hip 726) will also be available at Keeneland next week. Pompa privately purchased Mary's Follies after her victory in the 2009 GIII Boiling Springs S. at Monmouth Park for trainer John Forbes. Transferred to Rick Dutrow, the bay finished second in the Lake George in her first start for Pompa and went on to win the GII Mrs. Revere S. at Churchill in 2010. The now-15-year-old mare has been a blue hen for Pompa's operation. Her first foal, Night Prowler, carried Pompa's silks for five seasons, winning two graded events and placing in two others. He was claimed away from Pompa in 2018 and won the Barbados Gold Cup this term. Regal Glory was her fourth foal and she was followed by Café Pharoah (American Pharoah), a $475,000 OBSMAR buy, who is a multiple graded stakes winner in Japan.

“She looks like a 10-year-old mare,” Ryan said of Mary's Follies. “She is a beautiful mare, all quality and looks a lot like More Than Ready. She is correct and is just one of those solid citizen mares that, when you see her, you can completely understand why she has been so successful. Unfortunately, she is not pregnant, but she would be a very valuable addition to anyone's breeding program. She has been a very versatile mare and the cornerstone of his breeding operation to date.”

Another major highlight of the Pompa consignment is the ultra-consistent Grade III winner Turned Aside (Hip 1563). Winning twice as a juvenile in 2019, the Linda Rice trainee kicked off his sophomore season last term with a second in Belmont's Sir Cat S. and scored a decisive victory in Saratoga's GIII Quick Call S. next out. The bay did not appear fond of the unusual turf course at Kentucky Downs when fifth in the GIII Franklin-Simpson S. in September. Turned Aside got right back to his winning ways when he returned to New York, defeating the likes of GI Woodbine Mile winner El Tormenta (Stormy Atlantic) in the Aqueduct Turf Sprint Championship S. last time out Nov. 28. Only off the board twice in his career thus far, the homebred currently has a record of 9-4-2-1 and earnings of $241,967.

“He's definitely an exciting prospect,” Ryan said. “Obviously, a turn-key opportunity for somebody looking to go back to the racetrack and have some fun. He has been a really honest, consistent racehorse. American Pharoah is off to a great start. He is out of a young, stakes-placed War Front mare, who Mr. Pompa raced himself. He is coming into this sale in very good shape and I think he is going to generate plenty of interest.”

Turned Aside's graded stakes-placed dam Sustained (War Front) is offered as Hip 463 and her short-yearling colt by Connect follows her as Hip 464. The 10-year-old mare is back in foal to Connect.

Pompa's broodmare band is full of quality, but two other standouts are the Bernardini mares Proper Mad (Hip 793) and Seaside Escape (Hip 425). Out of SW Private Gift (Unbridled), Proper Mad is a half to MSW & GSP Secret Someone (A.P. Indy) and the dam of Grade I-winning millionaire Dunbar Road (Quality Road). A daughter of GSW & MGISP Promenade Girl (Carson City), Seaside Escape is a half to MGISW and multi-millionaire Cavorting (Bernardini). Both mares are in foal to Connect.

Country Grammer (Tonalist), who also carried Pompa's red, green and white colors to a graded win in 2020, is likely to be popular with buyers at Keeneland (Hip 1568). A $450,000 OBSAPR acquisition, the bay was third in his seasonal debut last June in a Belmont allowance, but captured the GIII Peter Pan S., which was run at Saratoga last year, in his next start. Last seen finishing fifth in the GI Runhappy Travers S. Aug. 8, the Chad Brown pupil currently has a record of 6-2-0-1 and earnings of $157,320.

“He is back in training at WinStar and looks magnificent,” said Ryan. “He was given a little time off, but is back under tack now and jogging up to the sale. He is a picture of a horse, talk about size, scope and balance. He is an accomplished horse already and quality individual.”

The Pompa dispersal also includes a promising group of newly minted sophomores, topped by impressive debut winner Spirit Maker (Empire Maker) (Hip 1561). Running well back off the pace in eighth in his Nov. 28 unveiling at Aqueduct, the $330,000 OBSAPR buy rallied smartly in the lane to earn his diploma for trainer Todd Pletcher.

“He is definitely an exciting prospect just based on the talent that he showed in his first start back in November,” Ryan said. “He is another horse who has been really well managed and is owned in partnership with WinStar. He should also appeal to anybody looking for something turn key. It was a race that gave him a bit of an education. It was not an easy trip and he handled it professionally.”

Some of the Pompa Estate's other 3-year-olds could have some timely updates in races this weekend. Homebred Carillo (Union Rags) (Hip 1566) debuts in race six at Aqueduct Friday against fellow Pompa colorbearer Cost Average (Speightster) (Hip 1567). The former is trained by Brown and the latter is making his third start for Pletcher. Brown is also unveiling Untreated (Nyquist) (Hip 1564), a $550,000 KEESEP acquisition, in the fifth race at Gulfstream Saturday.

The Keeneland January Sale kicks off Monday, but the first Pompa horse to go through the ring will be Regal Glory at the start of Tuesday's session.