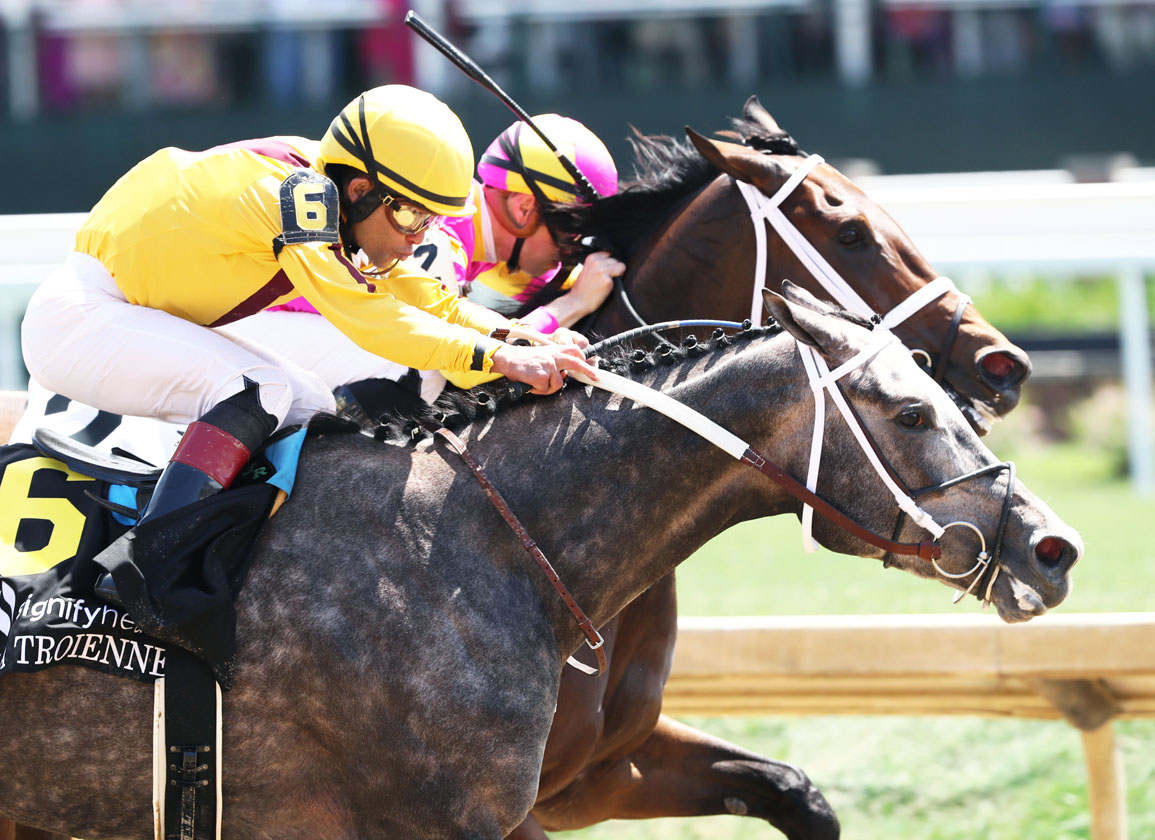 Well-bred Pauline's Pearl, eighth in last year's GI Longines Kentucky Oaks, reached the highest level Friday while running down 2020 Oaks winner Shedaresthedevil. Off as the second choice having last finished runner-up in Oaklawn's Mar. 12 GII Azeri S.–one spot ahead of Shedaresthedevil and behind 2021 champion female sprinter Ce Ce (Elusive Quality)–the grey was briefly hung wide into the first turn before working her way inward slightly in midpack as Shedaresthedevil showed the way. She mounted a three-wide challenge after six furlongs in 1:11.78, and continued to grind away at the leader's advantage as longshot Ava's Grace boxed on in between. Pauline's Pearl seemed to hit another gear past the eighth pole, and Shedaresthedevil could no longer hold her off, with the former notching a snug decision.

“[Trainer Steve Asmussen] told me to watch her at the gate; that she could break slow. But she came out fine and I got a good position,” said winning pilot Joel Rosario. “I got pushed out a bit on the turn [for home], but once we straightened out she leveled off. She ran well through the stretch.”

A winner of last April's GIII Honeybee S. over Ava's Grace, Pauline's Pearl was freshened after the Oaks ahead of a third in the GIII Iowa Oaks and seconds in both the GIII Charles Town Oaks and GIII Remington Park Oaks. She finished off her sophomore season with a score in the Nov. 21 Zia Park Oaks–good for a career top Beyer Speed Figure of 96–and resurfaced a convincing winner of the GIII Houston Ladies Classic S. Jan. 20 before returning to Hot Springs for the Azeri.

“So many things go into it,” said Hall of Famer Asmussen, who was winning his second La Troienne. “She was a nice filly early that continuously competed and got better. She came back a [better] 4-year-old. All four races this year have been tremendous. It is so satisfying for her to come back and get her first Grade I on Oaks Day. She did her best last year in the Oaks. You can see the improvement one year has made in her.”

Precocious dam Hot Dixie Chick–a half to 2017 GI Kentucky Derby winner Always Dreaming (Bodemeister)–annexed the 2009 GI Spinaway S., but was third at 3-5 in the following year's GIII Eight Belles S. on this same card. Her current 3-year-old Marsalis (Curlin) garnered 'TDN Rising Star'-dom in March. Hot Dixie Chick aborted to Good Magic after her subsequent mating, but produced a Constitution colt last season. She was bred to both Tapit and Quality Road for 2022.