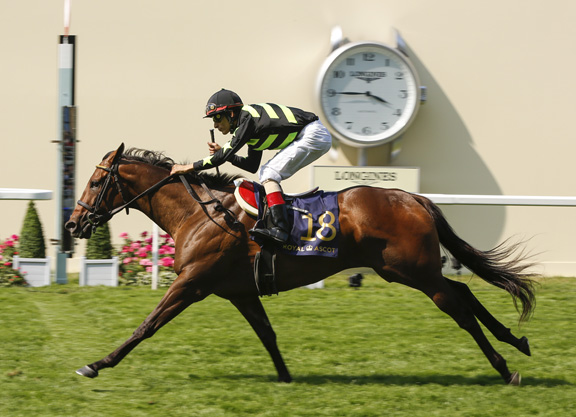 At the end of 2016, Scat Daddy had a 5.68 European A Runner Index. Our mid-year APEX ratings will be out in a couple of weeks, and with three Royal Ascot winners already this year, that index is liable to be somewhere around 8.00.

The odds board suggests he’s not done yet. Caravaggio, now unbeaten in five races, is odds-on for Friday’s G1 Commonwealth Cup facing two salty Godolphin 3-year-old sprinters, Blue Point (Shamardal) and Harry Angel (Dark Angel). Before that, Scat Daddy has no fewer than three runners in Friday’s opener, the G3 Albany S. at six furlongs for 2-year-old fillies: Ward trainees Fairyland (second favorite) and Princess Peggy, and the Jeremy Noseda-trained Take Me With You, an $800,000 Fasig-Tipton Gulfstream 2-year-old this March.

Scat Daddy was from the first crop by Johannesburg, who himself went seven-for-seven as a 2-year-old in 2001, winning three Group 1 races in Europe before doing an Arazi to win the GI Breeders’ Cup Juvenile on the dirt at Belmont Park. Scat Daddy, who is himself inbred 3×2 to Mr. Prospector, looked like he was kicking his sire off the right way by winning the GI Champagne as a 2-year-old and the GII Fountain of Youth and GI Florida Derby at three in 2007. But he finished only 18th of 20 in the GI Kentucky Derby in which the first three finishers were Street Sense, Hard Spun, and Curlin, and never ran again. Scat Daddy retired to Ashford for the 2008 season for a $30,000 stud fee, but between the world financial crisis and not being a first-crop stallion any more, by 2011 he was standing for $10,000, with second- and third-crop named foal numbers of just 62 and 53, respectively.

But his first-crop yearlings had made enough of an impression, in conjunction with his cheap $10,000 stud fee, that his 2012 crop included 119 named foals. He narrowly edged Hard Spun as leading freshman sire in North America in 2011, and by 2013 his stud fee was back up to $30,000. Meanwhile he had also been shuttling to Chile, and between No Nay Never and basically rewriting the Chilean record book when his first foals were 3-year-olds in the 2013-14 Southern Hemisphere season, his stud fee was set at $35,000 for 2015, and The Jockey Club lists him with 159 foals of 2016.

After Acapulco became his second Royal Ascot 2-year-old winner, he finished 2015 with 21 Black-Type Winners, nine of them Graded/Group SW. He had been announced as standing for $100,000 for 2016, and Coolmore looked set to send him some of their seriously good Galileo mares, but fate intervened like it sometimes does, and Scat Daddy succumbed to a heart attack at the age of just 11 in December 2015. So there was no 2016 season, and Scat Daddy’s final crop are yearlings of 2017. He topped the American yearling sales when the Scat Daddy half-brother to Beholder and Into Mischief bred by Fred and Nancy Mitchell’s Clarkland Farm sold to M.V. Magnier last September for $3 million. There’s no telling what his yearlings might bring this year, but there are sure to be some very good returns on his $35,000 stud fee in 2015.