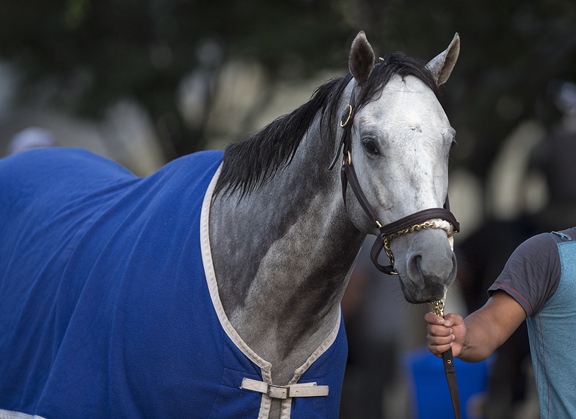 4th-Aqueduct, $62,000, (S), Msw, 12-1, 2yo, 1m, 1:37.56, gd.
CHESTERTOWN (c, 2, Tapit–Artemis Agrotera {MGISW, $943,800}, by Roman Ruler), the $2-million OBS March sale topper, kicked off his racing career with a third-place effort going six furlongs at Belmont Park Oct. 24. The even-money favorite while facing fellow New York-breds Sunday tracked the pacesetters while racing four wide over the sealed track through fractions of :23.61 and :47.25. He loomed a threat at the top of the lane and rolled to the lead at midstretch to win geared down by 2 3/4 lengths. Forever Wicked (Wicked Strong) was second and Wild Banker (Central Banker) was third.
Chestertown worked a furlong ahead of the OBS March sale in :10 1/5. He is the first foal out of Artemis Agrotera, who won the 2014 GI Ballerina S. and 2013 GI Frizette S. in the Bromans colors. The mare’s Uncle Mo yearling filly sold for $500,000 to Peter Brant’s White Birch Farm at this summer’s Fasig-Tipton Saratoga Sale. She also has an Arrogate weanling filly and she was bred to Into Mischief this year. Click for the Equibase.com chart or VIDEO, sponsored by Fasig-Tipton. Lifetime Record: 2-1-0-1, $41,540.
O-West Point Thoroughbreds, Chester & Mary Broman, Woodford Racing, LLC, Siena Farm LLC, and Masiello, Robert; B-Chester & Mary R. Broman (NY); T-Steven M. Asmussen.