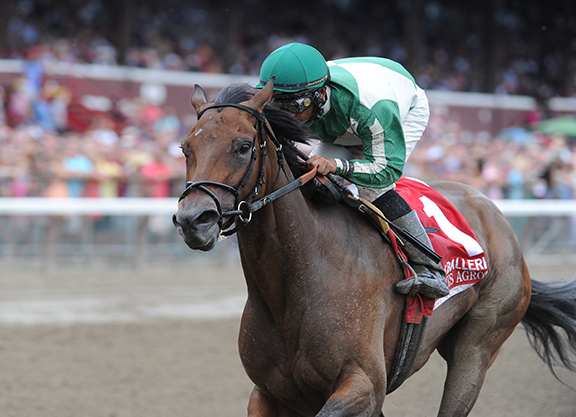 Arrogate (Unbridled’s Song) set the racing world on fire when he reeled off consecutive victories in the GI Travers, GI Breeders’ Cup Classic, GI Pegasus World Cup Invitational, and G1 Dubai World Cup. It wasn’t just the races themselves that got breeders excited about the big gray, but the way he won them with a devastating ease. When he retired, Arrogate was a hot commodity in the breeding shed. That first crop is on the ground now.

The progeny of Artemis Agrotera (Roman Ruler) have been a hot commodity as well. The mare’s first foal, by Tapit, made headlines earlier this year when he brought $2 million to set the record as the highest price in the history of the OBS March 2-year-olds in training sale.

Juddmonte Farms’ Leif Aaron said the attractive thing about adding Artemis Agrotera to Arrogate’s first book was not only her first-out 11 3/4-length maiden special weight win at Saratoga at two, but also her subsequent GI Frizette score, and an additional GI victory when sprinting at three in the Ballerina.

“With Arrogate it was very important for us to have as much speed as possible [in his book] because he could run all day,” said Aaron. “He really started doing his best running at three. So we thought it was important to mix in some 2-year-old speed in the book.”

“Artemis herself was a very big, scopey filly,” said Thomas. “She had [a] pedigree that [was] two-turn on the dam side, speed on the sire side… She was really fast early. She also didn’t look like she was as fast as she was.”

Both Aaron and Thomas agreed that the resulting filly from the pairing not only meets, but exceeds, expectations.

“When I first went out to see the filly,” said Aaron, “I couldn’t believe how powerful it was. Artemis Agrotera herself is a big horse and Arrogate is a big horse, and the filly looks like she has just an absolute ton of speed. A really big hip, a great shoulder, looks incredibly fast. I guess it makes sense with Unbridled’s Song being a champion 2-year-old, Artemis Agrotera being a Grade I winner at two, and then Arrogate’s third dam [Meadow Star {Meadowlake}] is also a champion 2-year-old. So there’s a lot of chance for precocity in that mating.”

Artemis Agrotera’s first foal, that aforementioned $2 million record-setter, is Chestertown (Tapit). Thomas consigned the colt on behalf of the Bromans, who stayed in for a one-third interest. Chestertown, whose new ownership group includes West Point Thoroughbreds, Robert Masiello, and Siena Farm, recorded his first work June 17 at Keeneland for trainer Steve Asmussen.
“She’s already had a $2 million 2-year-old,” added Aaron, “which was super important, to show that she’s kind of throwing herself with that kind of precocity, so we’re very excited about the Arrogate she has on the ground.

Obviously, it’s paramount to stallion managers to find the best matches for both potential early runners to get a stallion started and those who can keep a young sire going in subsequent years. Artemis Agrotera ticks both boxes.

The Arrogate–Artemis Agrotera filly is a third-generation Broman-bred. Thomas has been a part of the Bromans’ operation for many years, involved in everything from matings to early training.
“It’s really, really joyful,” said Thomas. “You know, it’s like your children and grandchildren. And then we share so many memories of ‘remember these, when those happened, or that race.'”
Aaron indicated the good faith of homebred breeders like the Bromans entrusting their top mares to a first-year stallion speaks volumes.

“The other thing that was very important for us is the Bromans breeding a mare like this to Arrogate,” said Aaron. “I mean, they’re owners/breeders that have had a ton of success in New York and the whole country at the top levels, and with their know-how, we were happy to be a part of the hopeful ingredient for them to breed another Grade I winner from this amazing family.”

Thomas said using Arrogate was simple. “He was brilliant each time that he ran. I also liked his pedigree. Here’s this big, scopey, two-turn looking horse that had just a really good turn of speed.”