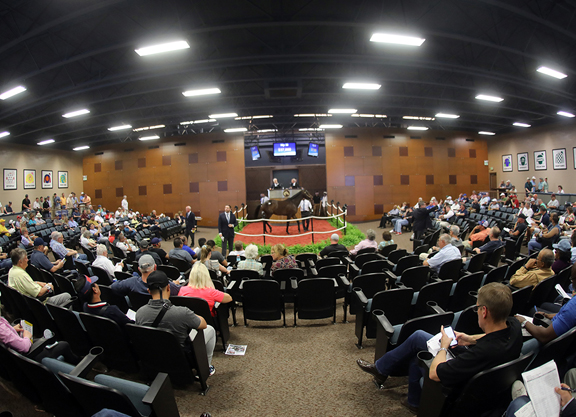 Northview Stallion Station will be busy at the upcoming Fasig-Tipton Midlantic December Mixed and Horses of Racing Age Sale on Tuesday, Dec. 8. The consignment will offer nearly 50 head, including a 27-horse reduction of breeding stock for Joseph Besecker.

Perhaps more importantly, the annual Midlantic sale will allow the Chesapeake City, Maryland-based farm the opportunity to show off stock from their growing stallion roster, including the first weanlings from Irish War Cry (Curlin) and Hoppertunity (Any Given Saturday).

“Our game is to bring the best we can for the market in the Mid-Atlantic region and in Maryland and not to price ourselves out of the market,” said Northview's Bloodstock Manager Paul O'Loughlin. “We try to go for sire power and horses with pedigree, and what's affordable to the Maryland breeders.”

A New Jersey-bred and homebred for Isabelle de Tomaso, Irish War Cry shone as a juvenile, breaking his maiden on debut and then taking the Marylander S. On the Derby trail at three, he won the GII Holy Bull S. and GII Wood Memorial S., and later ran second to Tapwrit (Tapit) in the GI Belmont S. He came back at four to win the GIII Pimlico Special S.

O'Loughlin says that Irish War Cry's first crop was popular with breeders from the beginning.

“It's always a good sign when you see the first foals and people come back again. Then you know they're good,” he said. “He's giving them the Curlin stamp and they look pretty good from what I've seen. All the breeders are still interested in him and there have been inquiries already for the coming year.”

Northview will offer one Irish War Cry weanling, a colt out of the stakes-placed Pret Say Eye (Ready's Image), selling as Hip 118.

Northview's other first-crop weanling sire Hoppertunity began his career at stud as the richest stallion to enter stud in the Mid-Atlantic. The Bob Baffert trainee earned a pair of Grade I scores in the Clark H. at three and Jockey Club Gold Cup S. at five. In his 34 starts, he ran in the money 22 times, and was seven-times Grade I placed. At seven, he retired with earnings of over $4.7 million.

“Hoppertunity doesn't need any introduction,” O'Loughlin said. “He ran all over the world and danced every dance with every horse around the country. He's stamping his progeny pretty well. They're big, strong, and have plenty of bone. They look very racey.”

The son of Any Given Saturday stood his first two seasons at Northview's Pennsylvania location, but upon the farm's recent consolidation, he will stand his first year in Maryland in 2021.

“He bred over 100 mares in his first two seasons, so especially now being in Maryland, it looks like he'll continue to be popular,” O'Loughlin noted.

Northview will consign Hip 132, a son of Hoppertunity out of the Silvikova (Badge of Silver) at the upcoming Fasig-Tipton sale, while two additional weanlings by the young sire will be offered as Hip 94 with Becky Davis and Hip 127 with Bill Reightler.

In addition to watching the development of the progeny from Hoppertunity and Irish War Cry, Northview also anticipates seeing the first crop of 2-year-olds hit the track next year for three-time graded stakes winner Madefromlucky (Lookin at Lucky).

“He didn't have huge books, but he had enough to sustain a good 2-year-old season,” O'Loughlin said. “The yearlings are pretty sharp-looking for a horse that was a distance horse, so we're excited.”

While restricted to a smaller book nowadays at the age of 20, Great Notion is still producing winners. During this year's Maryland Million program at Laurel Park, his progeny accounted for four of the eight winners on the stakes card.

“He's loved by everybody in Maryland,” O'Loughlin said. “Outside of Maryland, they show up everywhere. He's even had runners at Royal Ascot. It's an honor for Northview to have the best active stallion in the Mid-Atlantic at the minute.”

O'Loughlin said that Golden's son Michael oversaw the operation's consolidation process this year and has additional plans to better the farm moving forward.

“Michael is very enthusiastic. He's serious and plans to do a lot of remodeling. We're going to make it a powerhouse moving forwarding, bringing new stallions and rebuilding the farm–what Maryland needs.”

O'Loughlin said he is confident in Maryland's breeding program, and has high hopes for Northview's growth in the coming years.

“The Maryland Horse Breeders' Association is doing a great job in getting people to stay and breed here,” he said. “Northview Stallion Station is doing their utmost best to bring in the best stallions they can and afford people to keep them in Maryland. It's encouraging for the future. To have better horses, we need better mares and we need more people to stay here. But it's working.”