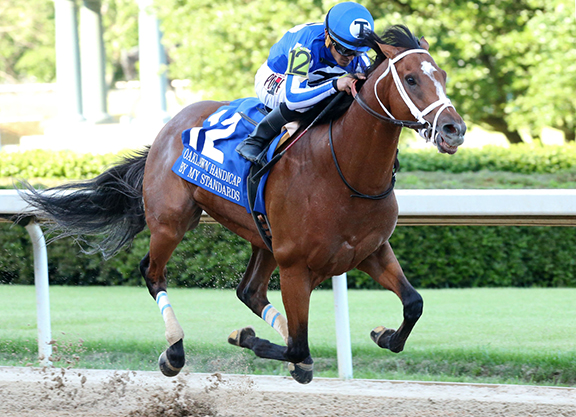 By My Standards | Coady

All that glisters is not gold. Certainly we shouldn't get too carried away: Goldencents has been launched by mares in such volume that there would be something badly amiss if he didn't come up with the occasional smart racehorse. In fact, a suitably brisk start made by his first juveniles in 2018 saw him entertain a staggering 239 mares last spring. That put him in the company of seven other stallions in the 200 club (five at Ashford, the other two alongside Goldencents at Spendthrift) and onto an aggregate 929 coverings in his first five seasons.

At the same time, his flagbearer By My Standards is now flourishing in such a way–his defeat of a hot field for the GII Oaklawn H. Saturday surely anticipated a Grade I breakthrough sooner rather than later–that we can wonder whether Into Mischief's ability to upgrade mares is already proving a heritable asset.

Goldencents, of course, was one of the earliest to draw attention to a sire who last year sealed his rags-to-riches rise with a first general sires' championship. A member of Into Mischief's debut crop, his pedigree appeared so plain that he made just $5,500 as a Fasig-Tipton October yearling in 2011 (much to the delight of Webb Carroll, who moved him up to $62,000 at OBS the following June).

His dam Golden Works (Banker's Gold) had herself been sold for just $7,000 after winning two claimers in a career confined to Assiniboia Downs; and was by a forgotten son of Forty Niner who ended his days in Cyprus. But while her own mother Body Works (Bold Ruckus) also spent most of her career in Manitoba, she did become something of a local legend in winning 18 times in 45 starts across five seasons, including five black-type prizes. And while the next dam Kinto was by another faded name, Kinsman Hope, she had at least also proved her hardiness with 13 wins in 46 starts.

To be fair, there is some mainstream quality loitering hereabouts, too, as Kinto shared a granddam with 1983 Kentucky Derby winner Sunny's Halo (Halo). But if that's still a pretty remote thread to support a talent as considerable as Goldencents, then it's also a perfect example of the dash Into Mischief imparted to his early mares, most of whom had only faint claims to making a positive genetic contribution of their own.

Goldencents was quick to light up the path ahead. He started with a seven-length success at Del Mar, before chasing home champion Shanghai Bobby (Harlan's Holiday) when fast-tracked to the GI Champagne S. on the opposite coast. At three, he put himself in the Classic picture by winning the GI Santa Anita Derby, only to disappoint in the first two legs of the Triple Crown, after which he dropped back in distance. That, too, has become a familiar step with the stock of Into Mischief, and Goldencents duly showed speed to be his forte when breaking 1:21 in the GII Pat O'Brien S. as a 4-year-old; albeit his ultimate branding was as a miler, running Palace Malice (Curlin) to a length in the GI Metropolitan H. and finishing up as a dual winner of the GI Breeders' Cup Dirt Mile.

Into Mischief was still available at $35,000 when Goldencents joined him at Spendthrift, but his giddy elevation since–to $175,000 this year–has quickly vindicated the farm's commitment to his first star. For those of their clients left behind by Into Mischief, there would still be an affordable alternative. Initially offered at $15,000, Goldencents had eased to $12,500 by the time his first crop reached the track in 2018.

By My Standards was not among the 29 more precocious animals who advertised their sire in the winner's circle that year–putting Goldencents clear top of the intake, by winners; and by earnings behind only studmate Cross Traffic, who was boosted by GI Breeders' Cup Fillies' Juvenile winner Jaywalk.

In fact, By My Standards didn't surface until Nov. 24 and would require four attempts to break his maiden. That was consistent with his profile as a young horse: scratched from the Keeneland November Sale as a weanling, he had ended up being prepped for OBS April by David Scanlon; and even on joining trainer Bret Calhoun evidently remained a big, raw horse who still needed time to fill his frame.

On the face of it, the subsequent achievements of By My Standards might suggest his sire to have powers of alchemy resembling those of Into Mischief. His dam A Jealous Woman, after all, was by another left-field sire in Muqtarib (Gone West) and the page overall is rather scanty in terms of black type. But it does include one or two solid footholds of quality.

A Jealous Woman was herself a pretty useful turf runner in California, winning a couple of stakes besides once running second in Grade II company. Actually, she developed quite a following in her day. She ran in the silks of Three Cent Stable, which included a couple of retired mailmen; and, after a miraculous recovery from a bowed tendon, she was trained by the wife of the Del Mar backstretch chaplain.

One way or another, anyhow, she qualified–for the little it may be worth–as probably the most competent performer by her sire, who failed to progress after winning a Group 2 sprint as a juvenile in Britain but did at least represent a distinguished family: his fourth dam was the Nuckols foundation mare Little Hut, whose sons Habitat and Northfields were both influential broodmare sires in Europe. In that capacity, incidentally, Muqtarib does have one other recent credit, having sired the dam of GIII Sweet Life S. winner Laura's Light (Constitution).

A Jealous Woman's dam, Miss Free Bird (Fly So Free), had limited opportunity in either her first or second career: on the track, she won her one and only start; she was then bred to mediocre stallions in nonetheless producing five winners from five starters. That figured, as she was a half-sister to Devils Disciple (Devil His Due), a sharp juvenile who had won three times at Calder before being caught late by Afleet Alex (Northern Afleet) in the GI Hopeful S.

Devils Disciple and Miss Free Bird were out of a Storm Bird mare whose own dam had very distinguished parents: Secretariat and Miss Musket, who won seven of her first eight including the GI Hollywood Oaks but was then thrashed by 50 lengths in her own backyard after luring the East Coast darling Chris Evert to a $350,000 winner-takes-all match. (The Hollywood Park crowd, according to William Johnson in Sports Illustrated, included “Greer Garson in a splendid white hat, Walter Matthau in shades, the 70-year-old Cary Grant cleverly disguised as a 50-year-old.”)

A Jealous Woman's first foal, by Ghostzapper, has won only a couple of modest prizes; her third, by Tapizar, remains unraced. But in between, breeder Don Ladd had sent her to the rookie Goldencents, and the resulting colt, leggy and immature as he was, managed a :10 3/5 breeze at OBS.

Josh Stevens saw enough to pay $150,000 on behalf of Allied Racing Stable. The agent and his patron, Chester Thomas, had doubtlessly been encouraged by early vibes about another colt from the first crop of Goldencents they had acquired for $130,000 at Keeneland the previous September.

This turned out to be Mr. Money, who went on that lucrative streak for the Calhoun barn last summer, winning four consecutive Grade IIIs and only foiled by a neck in the GI Pennsylvania Derby. His endeavors helped Goldencents see off Cairo Prince as leading second-crop sire by both winners and prize money (albeit the Airdrie sire, along with WinStar's underrated Fed Biz, scored higher in black-type winners/performers).

In the meantime, unfortunately, By My Standards himself was derailed just as he began to thrive. He had followed up his maiden success with a breakout score in the GII Louisiana Derby, but then finished midfield in the GI Kentucky Derby and disappeared for the rest of the year with nagging hoof issues. After a stylish return in a Fair Grounds allowance in February, a decisive success in the GII New Orleans Classic set him up for last–where he clocked a career-best Beyer of 102 (fastest time for the race since Medaglia d'Oro in 2003) and sealed millionaire status.

Much like Global Campaign (Curlin), who was featured in TDN last week, By My Standards looks eager to make up for time lost as a sophomore. As such, it looks like our own frustrations, as a community, might be redressed by a classy bunch of older horses, once we get out of lockdown.

It's certainly encouraging for Goldencents (and unsurprising, when you think back to those hardy second and third dams in Canada) that the best runners in his first crop are thriving with maturity, another case in point being Wildman Jack, who won a Group 3 on turf at Meydan this spring. Incidentally, grass might conceivably prove a promising angle for By My Standards, as he seeks that Grade I, bearing in mind not only the turf profile of his dam but also that Goldencents was a Grade II winner on synthetic. But those questions can absolutely be left to the skills of Calhoun, who has already put the apparently turf-bred Mr. Big News (Giant's Causeway)–who's out of a Galileo (Ire) mare–on the Derby trail this spring, also for Allied Racing Stable.

Though Stevens and Calhoun generally sieve out the sales shortlist for Thomas, they evidently give their patron the credit for landing on Mr. Big News, who has a genuine stallion's pedigree for a $95,000 yearling. But both men are certainly doing their part, having between them put a wholly unproven sire on the map, and Thomas has gratefully taken his cue to buy a couple of lifetime breeding rights in Goldencents.

He is now up to $25,000–and Spendthrift have quickly doubled down on the sire-line, securing Mr. Money's future place alongside sire and grandsire.

Whether or not Into Mischief can establish a lasting dynasty, he already symbolizes the transformative influence of B. Wayne Hughes on the bloodstock industry since his acquisition of the farm. It's amazing to reflect that when Goldencents and company were about to get him started, in 2012, Into Mischief was down to $7,500 and 50 mares.

With his classier books only now coming into play, everyone is waiting to see whether Into Mischief–still only 15–can meet his final challenge as a consistent sire of Classic types. For now, admittedly, it seems quite hard to picture Goldencents himself breaking the initial speed mold. But while his first three dams are by sprinter-milers, the other thing they have in common is that he has brought them back from oblivion.

So perhaps something of the Leslie's Lady (Tricky Creek) miracle is also going to percolate through Goldencents. As we've detailed before, after all, her own family–neglected as it somehow remains, for all her celebrity–must be the root of the prowess credited to her son Into Mischief, in that she has also given us Beholder (Henny Hughes) and Mendelssohn (Scat Daddy).

In principle, these remain early days for Goldencents. That said, he has such a huge cavalry coming over the horizon that he cannot justifiably slacken off. For the time being, at any rate, it does at least remain conceivable that Into Mischief will also be setting his own 'Standards' as a sire of sires.