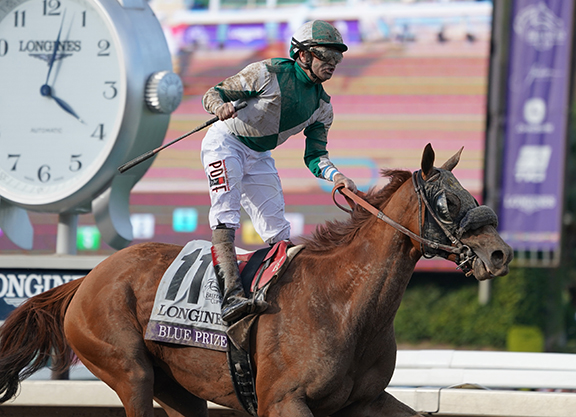 2019 Breeders' Cup Distaff winner Blue Prize (Arg) recently had her first foal, a filly by Into Mischief. Read on to learn 2021 mating plans for her and other million-dollar mares. | Horsephotos

The fireworks at the annual Keeneland and Fasig-Tipton November sales are always a highlight of the year as seven-figure bids abound on some of racing's top broodmares and broodmare prospects. But after the dust settles, it can be years before words get out on the breeding careers of the sales' top offerings. We catch up with the connections of a few of these most recent million-dollar broodmares and learn of their mating plans for 2021 in our 'Million-Dollar Matings' series.

Days after her victory in the GI Breeders' Cup Distaff, Blue Prize was named the sales topper of the 2019 Fasig-Tipton November Sale when OXO Equine's Larry Best went to $5 million to purchase the $2.6 million earner for his growing broodmare band.

She was initially paired with Spendthrift's Into Mischief and this year had her first foal, a filly foaled on Feb. 9 at Taylor Made Farm.

“That filly is a really nice foal, especially for a first foal,” said Frank Taylor. “She is doing really well.”

We stopped in and visited the champion and her new filly at Taylor Made Farm. Watch our video feature here.

Almost a year after Blue Prize's last dance, OXO Equine's Instilled Regard made his final start a winning one in the GI Manhattan S. last July. It was later announced that the regally-bred son of Arch would retire to Taylor Made and have Blue Prize slated on his first book.

“Larry really loved that mating and he liked the way the female family fit together physically,” Taylor noted. “He thought it was a mating that would produce a real Classic horse.”

The resulting mating will double up on Eclipse Champion and Grade I producer Heavenly Prize (Seeking the Gold).

Blue Prize first started her career in her homeland Argentina in 2016. After a Group I win there as a sophomore, she was privately purchased by Merriebelle Stable and relocated to the U.S. Over the next two years, she took four graded stakes races including the GI Juddmonte Spinster S. As a 6-year-old, she claimed a second win in the Spinster S. before defeating champion Midnight Bisou (Midnight Lute) in the GI Breeders' Cup Distaff.

She was bred to Tapit and last year, produced a filly that the Don Alberto team has been high on from the start, according to the farm's former executive director Fabricio Buffolo.

“She is a queen, arguably the best yearling filly that we have this year and that is not an easy feat because the farm has a strong group,” he said. “Salty is an extremely good-looking mare and the apple did not fall far from the tree.”

Watch our visit from last July with Salty and her Tapit foal here.

While Salty was barren this year, she was bred back to Tapit in February.

“It is hard to not repeat the cross after seeing what she did with her first foal,” Buffolo said. “Plus, you have a somewhat similar cross with Breeders' Cup Juvenile winner Essential Quality (Tapit-Delightful Quality, by Elusive Quality). Tapit can work with some different lines of Mr. Prospector and it's still early for numbers on the specific cross with Quality Road mares, but I believe we will see it more in the coming years with good success.”

A winner in her second start at three, Salty took the GII Gulfstream Park Oaks and later ran in the money in three Grade I races as a sophomore under Mark Casse. At four, she won the GI La Troienne S. at Churchill Downs.

American Story was purchased by Don Alberto Corporation for $2.2 million at the 2017 Fasig-Tipton November Sale. The Grade I producer was offered in foal to Tapit.

Fabricio Buffolo spoke on the pair, “Both have a good overall frame and plenty of substance. The 2-year-old is in training at Bridlewood and we have always been high on him since he was a foal. The yearling is a genuinely nice colt with good size and a solid, balanced frame.”

Buffolo reported that this year, American Story is expecting a filly by Curlin that will be retained by the farm.

“It is extremely important for the farm to have a filly out of her for the continuation of the line,” he said. “Her daughters sold well, plus the family recently had the Grade II winner Lake Avenue (Tapit) for Godolphin.”

This year, American Story will be sent to Into Mischief.

“It's hard to find faults on her and she consistently produces a nice foal, so the physical aspect seems to be straightforward,” Buffolo said. “The cross with Ghostzapper has less than a handful of runners so far and we will probably see more over time. The main idea is that the resulting foal will have a quite open pedigree if she produces a filly and with a different line than what American Story has been exposed to before. And believe me, no one would mind having a colt either!”

Trained under Bob Baffert, American Story was a winner and stakes placed at three before running second in the GII Milady H. at Hollywood Park at four. She RNA'd at the 2011 Fasig-Tipton November Sale for $295,000 and produced her first foal, named Americanize (Concord Point), in 2013. That colt would later become a stakes winner, running in the money in two graded races at Santa Anita. Her second foal, American Gal (Concord Point), ran third in the 2016 GI Breeders' Cup Juvenile Fillies and went on to take a trio of graded races at three and four including the GI Test S. and GI Humana Distaff S.

Larry Best was drawn to Concrete Rose at last year's Keeneland November Sale when he recalled the filly besting his GISW Cambier Parc (Medaglia d'Oro) the year prior in the GI Belmont Oaks Invitational S. He went to $1.95 million to add the $1.2 million earner to his broodmare band and send her to his first-year sire Instilled Regard.

“He is loading up on giving these stallions a great shot,” Frank Taylor said of Best, who is making his initial foray into the stallion business this year with both Instilled Regard and Instagrand. “He's putting all his chips on the table and I think a lot of other people are too. A lot of it is because of the kind of horses they are, but also because OXO is really going to support them.”

Trained by George Arnold, Concrete Rose graduated on debut as a juvenile before taking the GII Jessamine S. at Keeneland. At three, she ran undefeated in four stakes starts including her 2 3/4-length victory in the GI Belmont Oaks Invitational S.

Just a few days after her son Hot Rod Charlie (Oxbow) gave a career-best performance to run second in the GI Breeders' Cup Juvenile, Indian Miss went through the sales ring at the Keeneland November Sale, going to Larry Best for $1.9 million.

The mare was offered in foal to Into Mischief and she foaled a colt on Jan. 21 this year.

“He's a fantastic-looking colt,” Frank Taylor said. “He's one of the nicest ones we've got on the farm. That mare is just a super producer. She does it every time.”

Indian Miss will be visiting Best's Instagrand this year.

“Physically, they fit each other really well,” Taylor explained. “Indian Charlie works well with Into Mischief. We think it's going to be a big boost to have her in Instagrand's first book.”

In addition to producing Hot Rod Charlie, Indian Miss is also responsible for 2019 Eclipse Champion Male Sprinter Mitole (Eskendereya). Her other three starters are all winners and her 2019 filly by Into Mischief sold at last year's Keeneland September Sale for $525,000 to OXO Equine.

Frank Taylor shared a few other mating plans at Taylor Made for the 2021 season.

The dual Grade I-winning OXO Equine-campaigned Cambier Parc (Medaglia d'Oro-Sealy Hill, by Point Given) will be visiting Instilled Regard this year, as will four-time GSW Beau Recall (Sir Prancealot {Ire}-Greta d'Argent {Ire}, by Great Commotion), who was purchase by Best for $350,000 at the 2020 Keeneland November Sale.

In addition, Grade I winners Serengeti Empress (Alternation-Havisham, by Bernardini) and Princess Noor (Not This Time-Sheza Smoke Show, by Wilko) will be visiting leading sire Into Mischief.