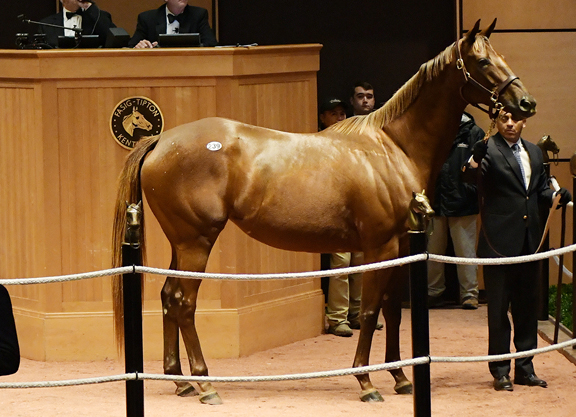 The fireworks at the annual Keeneland and Fasig-Tipton November sales are always a highlight of the year as seven-figure bids abound on some of racing's top broodmares and broodmare prospects. But after the dust settles, it can be years before words get out on the breeding careers of the sales' top offerings. We catch up with the connections of a few of these most recent million-dollar broodmares and learn of their mating plans for 2021 in our ongoing 'Million-Dollar Matings' series.

CONSTELLATION (Bellamy Road-For Royalty, by Not For Love)

Offered carrying her first foal by Curlin, Grade I winner and 'TDN Rising Star' Constellation was purchased for $3.15 million by the Don Alberto Corporation at the 2018 Fasig-Tipton November Sale.

Her Curlin colt would go on to sell for $250,000 to Repole Stables and St. Elias Stables at last year's Keeneland September Sale.

After visiting Into Mischief but failing to produce a foal in her first year with Don Alberto, she was bred back to the Spendthrift sire last year.

“We are extremely happy that she had a nice, robust filly,” he said. “She has been developing well. You can tell that she has all the parts there to turn into a nice filly as she grows.”

Buffolo said that Constellation will be bred to Quality Road this year.

“It will be interesting to see how she will produce with a horse like him with more scope and size,” he noted. “It's all about getting to know the mares and how they produce and it's a mating that has some contrasts on the physical aspect, which sometimes can be rewarding. Bellamy Road has only three blacktype winners as a broodmares sire and all three are from Mr. Prospector-line stallions.”

After a 'Rising Star'-worthy debut win as a juvenile for LNJ Foxwoods, Constellation ran in the money in her next two graded starts before capping off her 2-year-old season with a win in the Furlough S. As a sophomore, she added two more stakes wins before taking the GI La Brea S. At four, the chestnut ran second in four straight graded races including the GI Madison S. at Keeneland.

The million-dollar earner was bred to Justify as a maiden and produced a filly in January last year. De Seroux reported that the filly is “doing great” at the Ito family's Grand Farm in Japan, where Caledonia Road also resides.

The mare was bred back to Justify and foaled a colt on Jan. 27 this year.

This year, Caledonia Road will visit champion Kizuna, a son of the late influential Japanese sire Deep Impact and the leading Japanese freshman sire in 2019.

Trained by Ralph Nicks, Caledonia Road won on debut and ran second in the GI Frizette S. before taking the GI Breeders' Cup Juvenile Filles to win Eclipse honors for Champion 2-Year-Old Filly in 2017. She is a half-sister to stakes winner One of a Kind (Lemon Drop Kid) and hails from the family of Grade I winners Data Link (War Front) and Hymn Book (Arch).

One year after Bridlewood Farm and Don Alberto partnered up to buy a sales-topping Baffled (Distorted Humor) for $3.5 million, the same duo went to $2.3 million at the 2017 Keeneland November Sale to purchase 'TDN Rising Star' Cathryn Sophia. The 2016 Oaks heroine was carrying her first foal by Pioneerof the Nile.

The Pioneerof the Nile filly, now named Mezcal, was purchased for $625,000 at the 2019 Keeneland September Sale by Bobby Flay, but does not yet have any recorded works or starts.

Cathryn Sophia produced a Medaglia d'Oro filly in 2019 and last year, foaled an Into Mischief colt in May.

“He is a late foal that has developed so well over the last few months,” said Don Alberto's Fabricio Buffolo. “He is a strong individual and typical of what you expect of the sire.”

Buffolo reported that this year, Cathryn Sophia is in foal to Curlin. A similar mating proved successful when the Hill 'n' Dale sire produced champion and young sire Vino Rosso with a Street Cry (Ire) mare.

Because Cathryn Sophia's Curlin foal is expected to arrive late, Buffolo said that she will take a year off this year.

Purchased as a yearling by Cash Is King LLC and trained by John Servis, Cathryn Sophia broke her maiden on debut by 12 3/4 lengths before crushing the competition in the Gin Talking S. by 16 1/4 lengths in her next start. She won her sophomore debut in the GII Forward Gal. and maintained the undefeated streak in the GII Davona Dale S. After a third-place finish in the GI Ashland S., the Maryland-bred scored a victory in the GI Kentucky Oaks. In the later half of her sophomore season, she ran third in both the GI Acorn S. and GI Cotillion S. and caught a win in the Princess of Sylmar S.

Cathryn Sophia was offered at the 2016 Fasig-Tipton November Sale as a broodmare or racing prospect and sold to SF Bloodstock for $1.4 million. It was announced a month later that she would retire from racing, and she returned to the sales ring a year later in foal to Pioneerof the Nile.

The regally-bred Galileo Gal was offered at the 2018 Fasig-Tipton November Sale. Watch out feature leading up to the sale here. She was purchased by Craig Bernick for $1.4 million.

She was sent to Norelands Stud in Ireland and was first bred to Juddmonte's hot young sire Kingman.

That mating produced a filly that is now a yearling.

“We are happy with [her],” Bernick said. “Our plan is to put her into training with Jessica Harrington next year.”

Galileo Gal was next bred to Ballylinch Stud's Lope de Vega (Ire) and Bernick reported that she is expected to foal any day now. She will return to Kingman later this year.

Bred by the Niarchos family, Galileo Gal was purchased by Gary Barber as a yearling and brought to race in North America, where she was a winner at three and four. The chestnut is a half-sister to champion and four-time Group 1 winner Alpha Centauri (Ire) (Mastercraftsman {Ire}), as well a second G1 Coronation S. winner in Alpine Star (Ire) (Sea the Moon {Ger}) and stakes winner Tenth Star (Ire) (Dansili {GB}). Her family includes several other champions in Miesque (Nureyev), East of the Moon (Private Account) and Rumplestiltskin (Ire) (Danehill), as well as Group 1 winners and sires Kingmambo (Mr. Prospector) and Karakontie (Jpn) (Bernstein).