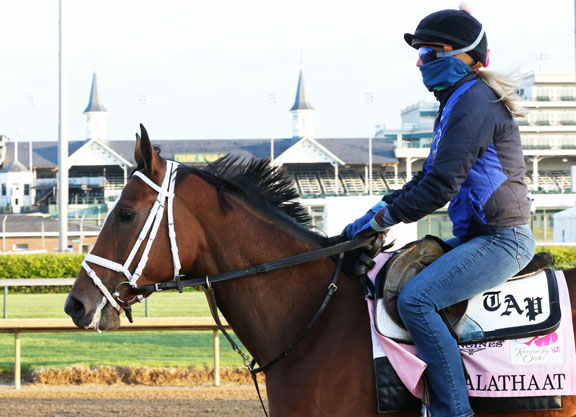 Undefeated 'TDN Rising Star' Malathaat (Curlin) will make her next start in Saratoga's GI CCA Oaks July 24 instead of the June 5 GI Belmont S., which was initially under consideration following her Apr. 30 GI Kentucky Oaks victory. The long range goal for the regally bred filly is the Breeders' Cup in November at Del Mar.

“Todd [Pletcher] and I have talked and have elected to bypass the Belmont,” Shadwell's Rick Nichols said. “She is a little light right now because she is still growing into the frame that she has. We want to give her a nice break and hopefully put some weight on her.”

He continued, “We will point her toward the CCA Oaks at Saratoga, which is 12 weeks from the Kentucky Oaks. Then we will aim for the [GI] Alabama [Aug. 21 at Saratoga], which is the main target, four weeks later. Then we will be able to give her a nice 10-week breather and head toward the Breeders' Cup.”