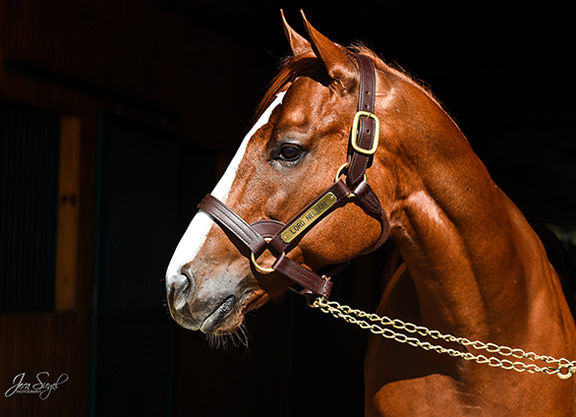 Spendthrift Farm's MGISW Lord Nelson (Pulpit–African Jade by Seeking the Gold) was euthanized Thursday after a long battle with laminitis. He was 9-years-old.

“Upon consulting with a veterinarian team consisting of Dr. Scott Morrisson, Dr. Jim Morehead, and Dr. Caleb Harms and our stallion manager Wayne Howard, it was determined that the only humane course of action we had was to euthanize Lord Nelson following his latest difficult battle with laminitis,” said Ned Toffey, Spendthrift's general manager. “It's pretty well chronicled his long fight with the disease. After several encouraging years, it unfortunately caught up with him and we couldn't allow him to suffer after we had run out of medical options.”

He continued, “It is a very sad day at Spendthrift. Lord Nelson was an unbelievably courageous horse and I think he'll always be remembered by the entire team at Spendthrift and anyone who ever got to be around him. Just a very special animal and we will miss him.”

Lord Nelson won seven of his 13 starts for trainer Bob Baffert and Spendthrift, earning $958,271. The flashy chestnut closed his career with a trio of Grade I victories in the Triple Bend S., Bing Crosby S. and Santa Anita Sprint Championship S. in 2016. He was forced to miss that year's Breeders' Cup and the 2017 breeding season with a leg infection became laminitis. Lord Nelson's oldest foals are 2-year-olds and he currently has three winners.