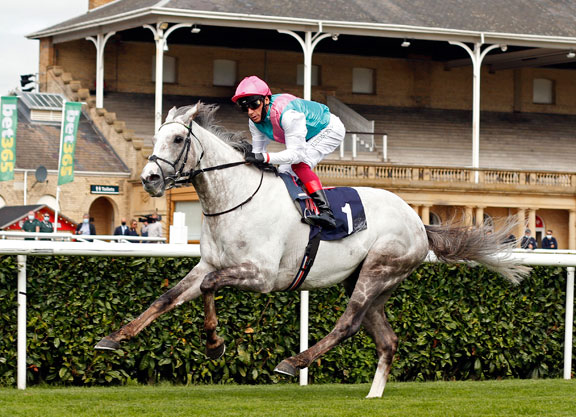 Logician in a smooth return at Doncaster | racingfotos.com

1st-Doncaster, £20,000, Cond, 9-10, 3yo/up, 10f 43yT, 2:10.36, gd.
LOGICIAN (GB) (c, 4, Frankel%20(GB)#tot">Frankel {GB}–Scuffle {GB} {SP-Eng}, by Daylami {Ire}) was under wraps after a storied case of peritonitis and went postward as the prohibitively priced 1-12 favourite facing just one rival, last year's G2 Zabeel Mile victress Mythical Magic (Ire) (Iffraaj {GB}), in this eagerly awaited return. He stepped into an immediate lead, racing under a firm hold through the early stages, but was headed briefly soon after straightening for home. Nudged back in front approaching the quarter-mile marker, the hitherto undefeated grey turned the contest into an exercise canter thereafter and powered clear following the same stands' side route as last year before gearing down for an easy seven-length score. “It was a nice, proper stretch and he's finished very well and comfortable under hands and heels,” said winning trainer John Gosden. “This horse had two months in intensive care and I can have nothing but praise for the veterinarians at the Newmarket Equine Clinic for saving his life, twice, so that he can be here today. It's been a long road and we're very pleased to see him back. There'll be no immediate plans, he's well entered in the autumn, but I'd like to see how he is in the next 10 days before even thinking about another race. Just to get him back here is extraordinary in itself. We couldn't be more pleased at this stage, but I don't want to commit to anything now. We're on the cusp of the autumn if we want to run again this year, but the horse will tell us. We know a mile-and-a-half is spot-on for him so, next year, he'll have races like the King George as an absolute target.” One of five winners from as many runners produced by Listed Snowdrop Fillies' S. third Scuffle (GB) (Daylami {Ire}), Logician is a full-brother to the stakes-winning Collide (GB) and a weanling colt. He is also kin to MGSW GI E.P. Taylor S. runner-up Suffused (GB) (Champs Elysees {GB}), Listed October S. placegetter Battlement (GB) (Dansili {GB}), the once-raced 2-year-old filly Monsoon Moon (GB) (Kingman {GB}), who shaped with a deal of promise when third in an Ascot novice heat last week, and a yearling colt by Time Test (GB). Scuffle is herself a daughter of MSW G3 Supreme S. third Tantina (Distant View) and thus a half-sister to G1SW sire Cityscape (GB) (Selkirk) and G2 Temple S. victor and MG1SP sire Bated Breath (GB) (Dansili {GB}). Lifetime Record: Hwt. 3yo-Eng at 14f+ & G1SW-Eng, 6-6-0-0, $656,003. Video, sponsored by Fasig-Tipton.
O-Khalid Abdullah; B-Juddmonte Farms Ltd (GB); T-John Gosden.