Letter to the Editor: Macagone's Tribe 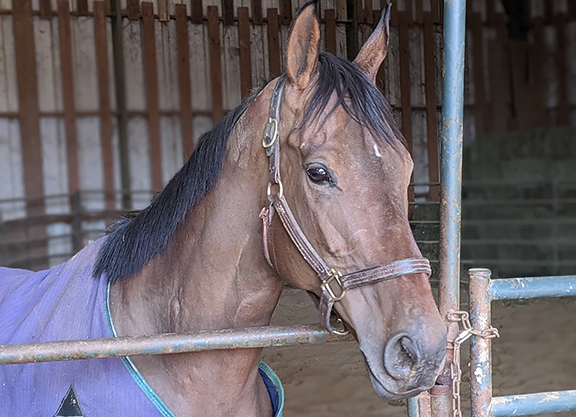 This past Saturday, we witnessed some great racing and stellar racehorses, but a group of horsepeople who work in racing were focused on the evening's 4th race at Turfway Park.

A few weeks earlier, a fellow “racetracker” and friend had posted on her social media page that she needed help. Laura Tilbury, “Tils” to everyone who knows her, has worked in racing for four decades, as an exercise rider and assistant trainer in New York and Florida. She is spending the winter in Aiken with her own horse Jack, but as always, she keeps a close watch on a few of her old favorite horses that she has worked with in the past. Tils had gotten an alert that one of her favorites, 10-year-old Macagone, was entered in a $5,000 claiming race at Turfway Park. Tils had galloped “Mac” years ago and fell in love with this classy turf stakes horse. His career began in 2014 and after a successful run for a number of trainers who had him, winning 11 of his 47 starts, earning Beyers of over 100 in 19 of those races and $654,981 in earnings for his owners and trainers, here he was in a bottom-level claiming. Tils knew it was time to help him.

She made contact immediately with his current trainer asking to buy him before the race, but unfortunately it was a hard `no.' She had already asked her Facebook clan to help with raising the funds to buy him and since that wasn't going to happen, she wanted to claim him and the wave of the tribe began. The power of the horse community is a beautiful thing. Within a few days, the money was promised–$20, $50, $100, and more–all from those in the racing industry workforce. Exercise riders, grooms, retired backstretch workers, trainers and others were contributing to help this old warrior retire. An upstate New York nonprofit racehorse rescue, Inherit the Gold Foundation, offered him a home to retire at Haven Oaks Farms. Morriseys Horse Pullmans was quick to offer him a courtesy van ride from Kentucky to New York, and many others asked how they could help. Then the morning of the race, he was scratched.

Tils was devastated; what would happen now? Another week passed and then came the alert that Mac was back in the entries, again for $5,000 at Turfway. The tribe regrouped, a trainer in Kentucky answered the call to make the claim and the hope and love from Mac's Tribe proved to be stronger than even imagined. As everyone was ready to watch the fourth race that night, praying all going in favor for Team Mac, Tils got a 4 p.m. phone call that Mac had again been scratched.

As it was a late scratch, she was nervous and decided to just make the call to the trainer right away and try to get him. The conversation was short and sweet. She told him she wanted him to retire, she had someone to come get him that evening, the ride to his new home was already in place and with that, the trainer decided to give him to Tils for free.

It was sweeter than ever imagined. Just like that, Buff Bradley, who had kindly offered to help in Kentucky, walked Mac from the stall where he was preparing for the race over to his barn. Mac was safe and on his way to a well-deserved new life. After a few days with Buff, Mac left Kentucky last night and has just arrived at Haven Oaks Farm. He walked off the van with his regal head high, almost knowing that he had a whole tribe of love with him. The folks at the farm were delighted to meet him and he happily received a blanket and mints. He is settling in very well and has already had a roll in the round pen at his new home. Mac will begin a new chapter in his life, one that all racehorses deserve.

The big hearted horse and his angel Tils are so grateful to the racing community. The heart and passion of people who work in racing is undeniable. We care to no end, the majority would do anything for the horse and this tale of a 10-year-old racehorse is proof. Actually, almost daily you can find someone from the racetrack community posting on social media about a horse that needs a home, one who needs to be rescued from a kill pen, and every day, racetrackers are putting their hands and hearts out to help. THIS IS HORSE RACING, the backbone and heart of a sport at its finest.