Knowlton Looking for 'Redemption' with Tiz the Law 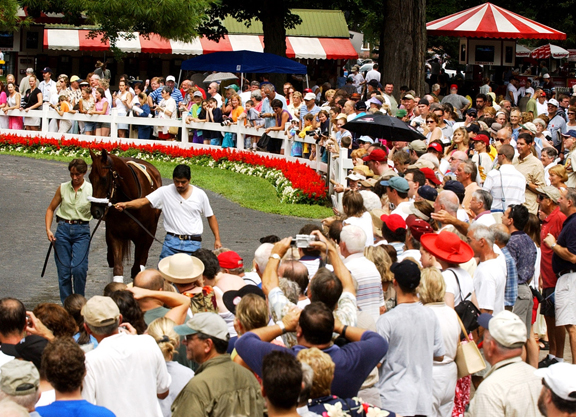 SARATOGA SPRINGS, NY – Mixing confidence with the cautiousness that comes from years of experience in Thoroughbred racing, Jack Knowlton is more than ready for the GI Runhappy Travers S. Saturday that will feature Sackatoga Stable's Tiz the Law (Constitution).

GI Preakness S. winner Funny Cide (Distorted Humor) was scratched from the Travers the day before the race, Knowlton is eager to watch one of the horses he co-owns compete in the marquee race in the city that has been his home since 1982. Tiz the Law, winner of the GI Belmont S. in June and the GI Curlin Florida Derby in March, will be a heavy favorite to add the Travers to his list of accomplishments.   For Knowlton and a number of his Sackatoga partners, the Travers is more than just a Grade I race with a $1-million purse. It is personal. First run as the inaugural race on opening day at the newly constructed Saratoga Race Course in 1864, the Travers has become part of the local culture in the region surrounding America's oldest race track.

The 2003 Travers looked to be a showdown between the Triple Crown rivals Funny Cide and Empire Maker. Funny Cide had edged Empire Maker (Unbridled) in the Derby. Five weeks later, after skipping the Preakness, Empire Maker won the Belmont, five lengths in front of third-place Funny Cide. Both were entered in Travers on Wednesday. Trainer Bobby Frankel announced that Thursday evening that Empire Maker was sick and would not make the Travers. The next morning, Funny Cide was scratched, too. The Sackatoga gelding had taken ill after running third in the GI Haskell Invitational S. on Aug. 3 and when mucous was found in his lungs after a routine gallop the day before the Travers, trainer Barclay Tagg pulled the plug.

“I tell everyone that my second-biggest disappointment with Funny Cide, other than obviously not winning the Belmont and the Triple Crown, was not being able to run in the Travers,” Knowlton said. “He just got knocked out running in the Haskell. That was the race you got money to go to. The timing was right. It was off a nice break after the Belmont. It was kind of the typical progression that you would do. Unfortunately, it did not work out. It was a bad-weather day down there in terms of heat and humidity. Then he got a clod of dirt in his eye and his eye got infected. It just didn't work out the way we had hoped it would.”

Knowlton paused ever so slightly and said, “Now, God willing we will get through another week and he will be ready to roll in the Travers this year.”

In 1995, Knowlton persuaded five of his high school buddies from Sackets Harbor, NY, a little town on the eastern end of Lake Ontario, to form a partnership to buy and race some horses. They blended Sackets and Saratoga to name the stable. With four other partners in the mix, they hit the mother lode with Funny Cide, a New York-bred they had acquired for $75,000 in a private transaction in early 2002. Their appealing everyman-beating-the-Goliaths story attracted international press coverage and cross-over appeal.

While small stables do come up with a Grade I-level horse on occasion, Knowlton appreciates that having a second star is quite unusual. Like Funny Cide, who was from Distorted Humor's first crop, Sackatoga took a chance on the initial crop of babies of Constitution (Tapit). The stable bought him as a yearling for $110,000, the most it had spent on a horse. He has won five of six starts, earned $1,480,300 and his breeding rights have been sold to Coolmore.

“It's beyond what anybody could ever imagine, to have a horse like this, that has accomplished what he has already accomplished,” Knowlton said. “You've got three Grade I wins, you've got the Classic race. You've got the Florida Derby that is probably considered the most important Kentucky Derby prep. You've got the Champagne that is maybe even more prominent than the Breeders' Cup Juvenile in terms of 2-year-old races. What he has done is pretty incredible. To be along for a second ride after the first one is mind-boggling, quite honestly.”

The situation is slightly different with Tiz the Law. Lew Titterton and Knowlton are the only Funny Cide partners in this ownership group. In 2006, Knowlton and fellow Saratoga Springs businessman Ed Mitzen formed Sackatoga Stable LLC with Knowlton as the operating manager. Typically, they have operated a four-horse stable with shares priced at $5,000.

“Our goal, when we buy a horse, is to have it be a New York-bred that can run in the New York-bred stakes program,” Knowlton said. “When we buy them, that's the ceiling that we are looking at. We've been able to do that not that often.”

Knowlton pointed to Niko's Dream (Central Banker), who was second in two NY-bred stallion stakes last year and was fifth in the ungraded Dayatthespa S. last week at Saratoga.

For Tiz the Law, Sackatoga Stable offered 26 shares at $7,500. Knowlton said that a total of 35 people have ownership stakes in the colt. About half of the owners are expected to be in Saratoga on Saturday. The COVID-19 restrictions in place at Saratoga Race Course allow a total of 12 licensed owners in a horse to be on the grounds for the race. The rest will of the group will be at a viewing party in the ballroom of a local hotel.

Thanks to Tiz the Law's success, the stable has made some changes this year to the way it operates. On June 29, it went far beyond its usual level and spent $290,000 at the Fasig-Tipton Midlantic 2-year-old sale to purchase a daughter of Tonalist (Tapit) out of the Harlan's Holiday mare Holiday Apple. Knowlton chuckled at the suggestion that Tiz the Law paid for the filly that has been named Tapple Cider.

“You would have to ask all the partners,” he said. “Most of the partners are spending found money. There are a couple of people who aren't in Tiz that are in this one. For the most part they are Tiz parnters who have been rewarded. There were some people who were interested in having a little smaller group, so we put one together with 15 shares for this horse.”

Sackatoga has also picked up a pair of 2-year-olds by first-crop sire Laoban (Uncle Mo), who was represented by his second winner Aug. 2 at Saratoga. Knowlton said there here are 47 partners in the Laobans, which he said had a lot to do with Tiz the Law.

“I've had to turn people quite a few people away,” he said. “I figure that the two percent with 47 is the most that I would ever go. There were a lot of people who seemed very interested. We were able to keep the share price down to $6,000 and pay all the expenses through the end of the year with that. That's pretty attractive for everybody who are in already and for new people, many of whom may have had experience elsewhere and are looking for a different experience. All the publicity about Tiz and Barclay and Sackatoga has brought a lot of people out of the woodwork and being interested in being part of it.”

Sackatoga completed its deal with Coolmore following Tiz the Law's three-length victory in the GIII Holy Bull on Feb. 1 and the Florida Derby. Knowlton said that there was plenty of interest from breeders in Tiz the Law, whose only loss was a third by three-quarters of a length on a sloppy track at Churchill Downs in the GII Kentucky Jockey Club on Nov. 30. Knowlton gambled on Tiz the Law running well in the Holy Bull.

“They wanted to buy him before that race, but I was in no rush to do anything,” he said. “I just felt that after he had lost that race in Kentucky I told people to just draw a line through that. That was absolutely the right answer. You look at his next three races and every one of them has been a knockout.”

There were no breeding rights to sell with Funny Cide, who ran until he was seven and earned over $3.5 million. Knowlton said he knew what he wanted out of any agreement with a farm.

“I drew two lines in the sand with everybody that I talked to: that you cannot buy any racing rights and he has to run through the 4-year-old year,” Knowlton said. “If you look on social media there are a lot of people who don't believe that, but as long as he is healthy and running well, that's the deal.”

Knowlton was up before dawn Saturday to watch the last of Tiz the Law's three Travers works at 5:30 a.m. He covered five furlongs on :59.44 under Heather Smullen and Knowlton figures that Tagg has him perfectly set up for the Travers.

To make his case, Knowlton points to his pedigree, his performances as the races have increased in length and an assortment of statistical data.

“He just closes. He gallops out,” Knowlton said. “Then you look at this breeding. With a mare by Tiznow, who won two [GI Breeders' Cup] Classics at a mile and a quarter, I just see a mile and a quarter being so much in his wheelhouse that I probably have more confidence coming into this race than I did in any race that he has run so far.”

For Knowlton, in particular, the Travers has so much meaning. He said he went to his first Travers in the 1970s and has been a regular at the biggest race of the Saratoga season for more than 40 years. The Derby on Sept 5. and the GI Preakness on Oct. 3 are very much on the schedule for Tiz the Law. And he could go on to compete in the Breeders' Cup Classic at Keeneland. But, first, it's the 151st Travers. Knowlton said a victory in the Travers in front of empty stands would not diminishe the accomplishment for him.

“Obviously it would be much happier to have life normal and have 50,000 people there, an awful lot of happy people to see the horse going into the race that will still be the favorite for the Kentucky Derby,” he said. “That's pretty exciting stuff. It's historical, the Mid-Summer Derby before the Kentucky Derby. This being a prep race for the Kentucky Derby. But, unfortunately, that's not the way it is, not the way it's playing out. We'll hopefully have our dozen people there and be able to see it, which we haven't been able to see his last two Grade I wins. It will be a big step up.”